I caved and bought into this. No other new issues for me this week, and my subscription to Batman would have meant a partial read anyway. Glad I did! Nice action packed start to the story. Art is great as well, a bit reminiscent of Greg Capullo. Not having read Robin or Deathsroke Inc didn’t hinder my enjoyment. Hopefully stays that way going forward.

Read this on the same day I bought it! A rarity that is quickly becoming the norm.

Anywho, I really enjoyed this issue. I have kept up with Deathstroke Inc. and Batman but not Robin. This will be my first go-around with that series. I really liked the art in this book, the double-page spread of the word “BANG” looked great! I know it is silly to focus on that but it is something that I haven’t seen in a long time in a comic. I loved how it reinforced the importance of Ra’s being shot.

I really liked the art in this book, the double-page spread of the word “BANG” looked great! I know it is silly to focus on that but it is something that I haven’t seen in a long time in a comic.

Not silly at all; was a standout spread. I didn’t see it coming. I mean I had an idea Ra’s was gonna die based on spoilers I read, but wasn’t expecting it there. Maybe I was too much into his speech

I have kept up with Deathstroke Inc. and Batman but not Robin.

It’s interesting to see what books we were reading before this event!

Maybe I was too much into his speech

See, the speech was why I knew it was going to happen. That’s just storytelling 101 – the stronger an empassioned speech is getting, the more likely stuff’s gonna go down. See Sam Jackson in Deep Blue Sea, for example.

Not going to lie, I am not a fan of Damian but in small doses he is fine and can be great. This issue is an example of him being great! The entire interaction with Bruce was well scripted and really set the tone…after, you know, that assassination.

Just read Batman tie-in…pissed me off enough to want to throw my kindle against the wall. No Bruce/Talia after what she did. A kiss can be forgiven but it better not goes further…his last kiss should be with Selina if the death of the justice league is going to stand. Ghaaa I hate Bruce/Talia i would not be surprised if she slipped a knife between his ribs as you can’t see where her hand is. Talia might be planning to kill bruce dump him in the pit so he is possessed by the Pits demon then heal herself.

Just read Batman tie-in…pissed me off enough to want to throw my kindle against the wall.

The new Comixology sucks, sure, but you don’t need to ruin your Kindle over it.

I haven’t seen one of those in some time, pard.

Seriously though, I’m tempted to drag my Kindle out.

I’ve enjoyed getting back into print, thanks to Comixology’s humdinger of an overhaul, but I haven’t used my Kindle in quite some time, either.

As for Shadow War, I’ll likely yoink the first two parts today, as the only other new release of note for me this week is World of Krypton #5.

I forget the emoji button exists and started back when it was =) was how you did an Emoji. IDK the New batman beyond title looks good its a continuation of Batman: Urban legends 7 and Batman Killing time was interesting. it’s firmly been set in the Batman/Catwoman Universe.

Ah, back in the Community 1.0 days. Back when an edit button was a dream as well.

Batman is pretty much the one Batman-starring Batbook I read as it comes out, while Nightwing is my jam as far as Batbooks in general go.

Also, the upcoming Poison Ivy mini? Definitely getting it.

What’s keeping my interest in Nightwing is Babs/Dick moments right now as Batman: Urban Legends 10 lowered my opinion on Nightwing again. I stopped liking Dick after he sucker-punched Bruce in the DCAU. He is a good guy and all. I get why he is a fan favorite but then this pops up: 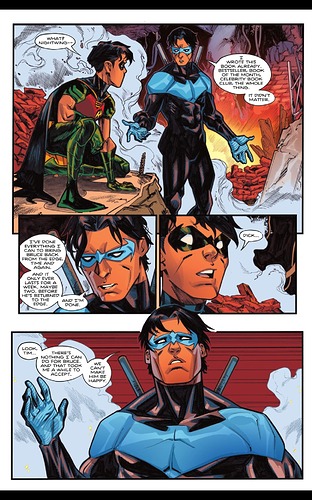 I can see his POV, but its a Dick move on Dick’s behalf to give up on Bruce, no matter how often Bruce goes back to the edge.

Family doesn’t give up on family, ever, and those in the Batfamily should know better.

Rant: It also explains Dicks actions in Robin issue 6. Bringing Damian home would have made bruce happy, but Damian miserable. So he chose Damian’s happiness. The same issue the picture I posted is from Tim’s notes is different from normal unhappy bruce and Dick brushed him off, given Tim has seen Bruce at his lowest points since Jason so that is saying something.

Yeah, I was not a huge fan of that story or interaction. It felt too much like a writer attempting to be too meta, and warping the characters as a result.

I went to check the last page again and noticed something 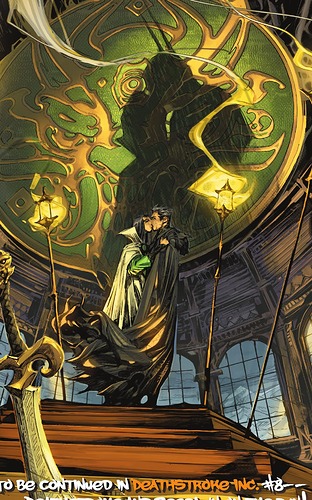 The entity that lives in bruces mind known as Batman represented by the shadow is leaning into the kiss, Bruce uncowled is standing there unresponsive and in shock hands at his side. the demon emblem in the back is ominous and almost hungry. it reminds me of the vision Bruce has of the future in Gotham city villains, the demon’s eye almost resembling the shoulder pads of the mural representing the Dark multiverse Al Ghul batman from the BATMAN/SUPERMAN AUTHORITY special…wait now that i have read the issue…that likely is said dark multiverse batman as you can see the cowls horns are distended like the art for that book. 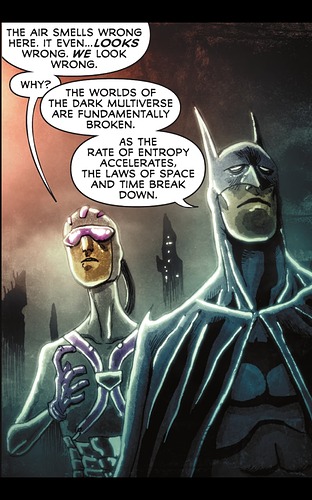 Sure, you could imagine it like that but honestly seems like those shadows are a artistic choice.

If Talia and Bruce are back together it wouldn’t be the worse thing to happen. Bruce and Selina have this weird complicated relationship that stems from in-character ego and editorial mandate to not have these two married, so even if Cat and Bat is a better romantic affair, it doesn’t matter. DC comics are very busy flipping that metaphorical coin.

The next time Batman sees Catwoman:

Seriously though, Selina and Bruce aren’t exactly the most…monogamous people on the planet. So I really don’t see this being a dramatic end to that relationship and I can understand if DC wants to play around with the Bruce/Talia thing for a while since we’ve had the Bruce/Selina thing be a big focus since Rebirth started…six years ago?! Yo what the FU–

Anyway. Rest of the issue was neat too. I was pleasantly surprised to see the other main characters in this issue have a little bit of something to do. I especially loved the scene of Robin meeting with Rose to kill her father. Two badass kids of badass fathers with major daddy issues coming together to kill a daddy. Fun times.

I can just hear the cheesy, canned, sitcom laugh track playing over what are sure to be Full House-style proceedings.

Watch out for Rose, Michelle and the rest of the Tanner clan!

we’ve had the Bruce/Selina thing be a big focus since Rebirth started…six years ago?! Yo what the FU–

I just wanted to say I feel you. I got back into DC comics during Rebirth and now I feel like a old man telling these new kids to read a real book for once. I’m in my early 20s, I’m not even that old!