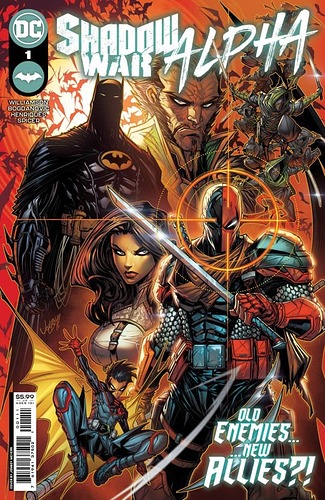 When Deathstroke assassinates Ra’s al Ghul, Talia al Ghul demands revenge and sends her League of Shadows to kill Deathstroke and Deathstroke Inc.! Batman and Robin must team up to track down Deathstroke and bring him to justice…but do they? Expect over-the-top fights, action, mystery, and betrayal as this crossover event creates a major impact on the DCU!

Below is a complete checklist for Shadow War. Click the links for summaries of each issue, along with rad cover art!

Shadow War begins this Tuesday, March 29th, in the pages of Shadow War: Alpha #1. What are your expectations for this crossover involving Batman, Deathstroke Inc. and Robin? Discuss below!

Ravager (as seen on the variant cover of Deathstroke Inc. #9, and drawn by Derrick Chew) wanted to stop by and say hi. 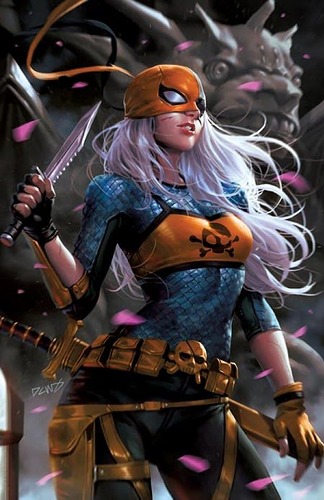 I’m sure I’ll be reading this eventually, but I still have a lot of material to read prior to picking the crossover up.

Until then, the only Shadow War I recognize is: 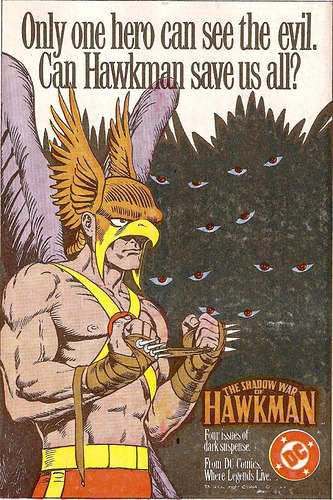 I still have a lot of material to read prior to picking the crossover up.

Likewise. Initially, I was going to pass on most of Shadow War until it came to DCUI (with the exception being Deathstroke Inc.), but the more I’ve read about it, the more interesting its become, so I’ll pick it up.

Plus, its been a while since there was a Batman-related crossover of interest (Joker War and Fear State didn’t do a lot for me), so Shadow War will hopefully scratch that itch.

Also, I long ago gave up trying to be completely caught up with my comic reading, as there’s always something that grabs my four eyes, and is then added to my respective reading stack, be it digital or print.

Until then, the only Shadow War I recognize is:

Looking forward to this event! I’ve been keeping up with Batman and Robin and enjoying both books. Going to be my first taste of Deathstroke Inc. Should be interesting to see where they take all these characters.

Going to be my first taste of Deathstroke Inc.

Conversely, I’ve kept up with DI and Batman, but this will be my first go-around with the current Robin book.

The first five issues of Robin are on DCUI now and it’s REALLY good. 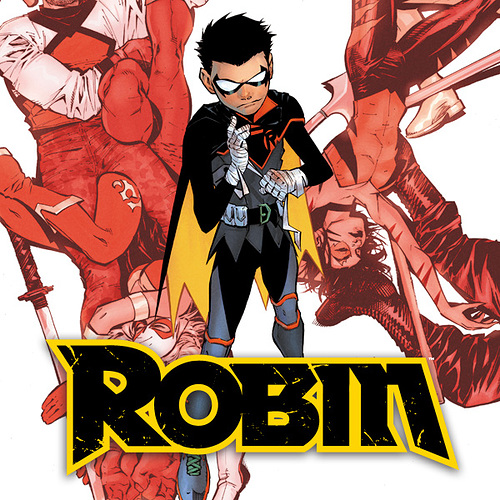 This brand-new solo Robin series will force Damian Wayne to find his own path away from both sides of his family! New mysteries! New supporting cast! First...

Also, this is starting to pop up: 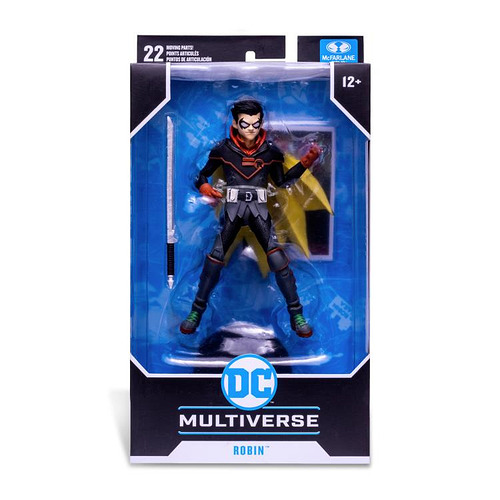 Between that, Shadow War and the earlier issues of Robin, its a good time to be diggin’ Damian.

I saw that on a TikTok vid of someone opening it up! I’ve really liked the McFarlane toys I’ve gotten and would like to get more, including that one.

Speaking of, I think this might be my favorite Damian costume, outside of maybe the B&R costume when he was with DickBats.

I’ve really liked the McFarlane toys I’ve gotten and would like to get more, including that one.

SN: I just bought him and Martian Manhunter. They look quite rad.

Offhand, I’d go with his Rebirth look (which has multiple figures), with an added emphasis on how Jim Lee and Jonboy Meyers drew it, respectively: 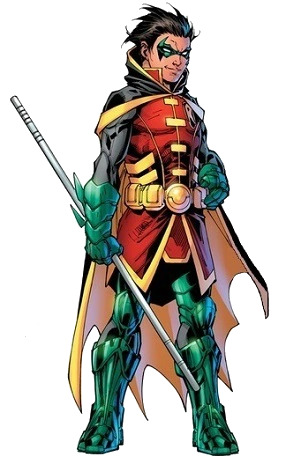 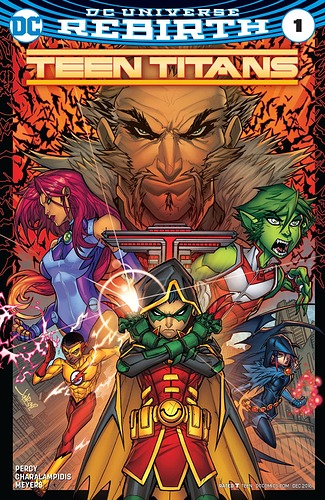 Man, I wish you hadn’t linked me that because I started looking at what else is in stock and my wallet and my shelving space is like 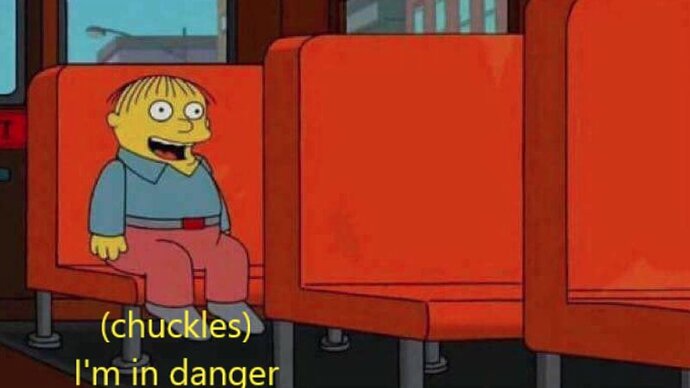 And those are good looks too, don’t get it twisted – I can’t really think of a costume he’s had that I hated. I think I like the black and red costume more because it retained a lot of the classic Robin look while still making it look unique to Damian, if that makes sense.

Also, don’t let the leprechaun tell you to burn anything, Ralphie.

I think everything goes well with Chew, as the man can draw.

So I read the first part and it was a solid start. The stuff they’re doing with the al Ghul family is pretty interesting, and I wonder where they’ll be up to after all of this.

Deathstroke being framed for the assassination is…a choice. I guess it makes it easier for Batman and potentially Robin to protect him, but it’s not as interesting of one. Since Slade is trying to be the “king of the supervillains,” you would think that killing the Demon’s Head would cement that title. Of course, it could be a ruse, so I guess we’ll see what happens.

And finally, we got the reunion of Batman and Robin! …And Bruce almost immediately puts his foot in his mouth when talking to Damian about what happened with Alfred. I mean, I get that Bruce was trying to say he wished that Damian didn’t have to see what happened and feel responsible for it, but yeesh.

All I’m saying is that Williamson better give me some sweet, sweet catharsis between Bruce and Damian after all this or so help me I’ll be very disappinted.

Definitely my favorite issue of Batman that Williamson’s written so far, even though it’s not technically Batman! But that’s mostly because it’s a Robin and Deathstroke issue, too, and Robin is one of the best things DC is publishing right now. I hope the whole event maintains this level of quality - not deep or amazing, but thoroughly entertaining.

I enjoyed the first issue so far. the story looks like it’s going to be good I am glad batman finally got to see his son again but am not glad he once again left. (side note: I was extremely disappointed Dick let Damian go out on his own, but in light of batman Urban legends 10 this makes more sense. to a point. As Damian is just 14.)

It’s nice they have Talia caring about Damian, however, it also shows just why Bruce has had a hard time connecting with his son. Bruce had a normal (modern) childhood until age 8 well Damian did not. However, it also shows Damian is not good for Bruce. bruce chose to save the living and Damian felt bruce should have let him die to save a dead body. now to be fair to Damian he did not know Ra’s could not be brought back to life again with the pit but still, Bruce would have made the same choice every time. It shows just how indoctrinated Damian is to the way of thinking of the League of Assasians. this is not going to be good for Bruce given the headspace he has been in since The Joker War.

It honestly feels like Damian took another step back from how he has been matureing in Robin.

Gotta figure Ra’s is somehow complicit in his own assassination. He knew he was sick and that the pits weren’t working correctly but concealed that from everyone including Talia.

Could Fauxstroke be Deadshot? It’s someone Slade has encountered before, Lawton is sort of “dead” right now but sort of not in Task Force Z. 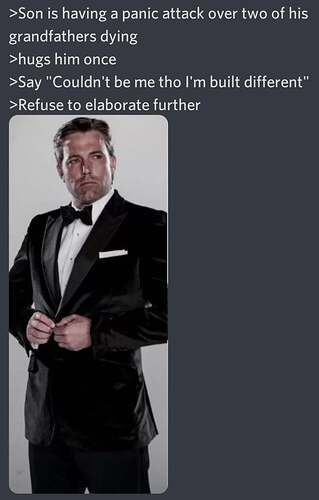