If Talia and Bruce are back together it wouldn’t be the worse thing to happen. Bruce and Selina have this weird complicated relationship that stems from in-character ego and editorial mandate to not have these two married, so even if Cat and Bat is a better romantic affair, it doesn’t matter. DC comics are very busy flipping that metaphorical coin.

Om…as I see it Bruce and Talia’s relationship basically ended when bruce learned she kept Damian from him…or when her abomination known as haritic killed Damian. BatCats weird relationship stems from the editorial policy Batman/Batmfamily cant be happy, however, it seems to have changed to Batman cant be happy. It also might have something to do with the fact Denis O’Neill was editor of the batfamily books from 86-2000 and shipped Batman with his creation, Talia.

Seriously though, Selina and Bruce aren’t exactly the most…monogamous people on the planet.

Om actually that’s the thing, Bruce actually can’t sleep with most of the women he dates given his scars would bring up to many questions. He has to trust that woman enough to reveal he is Batman to them before he can sleep with them. He did not (on paper) Sleep with wonder woman during the 47 years they took the Gentlemen’s place…he did consider it though.

Selina also is actually more monogamous in the Rebirth era, given she did reject advances from at least one suiter just after she broke off the wedding. She is also a tease though. both Bruce and Selina do have a strong sense of loyalty at their core.

Also to have Bruce just drop his relationship with Selina for Talia would be the worst slap in the face to fans ever given Heart of Hush has been made cannon again as of Catwoman vol 5 issue 40.
PS: Didn’t Damian already kill Slade once?

not have these two married,

PS: Actually it’s more they cant be married in earth zero. They are married in a lot of alternate universes from THe nail, Earth 2 Earth two, Catwoman guardian of Gotham and more.

Because the schedule of releases for Robin and Deathstroke Inc was already set, and they chose not to change that for the event. I’m personally very frustrated because my podcast has to cover it, and it makes schedulling very tricky, but I understand why they’re doing it.

Well, I don’t want to be TOO self promotiony, but my two cohosts and I podcast about Batman comics here. We’re all pretty excited about Shadow War currently!

Its my thread, so I say promote away, as long as it’s Shadow War-based, which it 'tis!

If Talia and Bruce are back together it wouldn’t be the worse thing to happen.

PS: First off sorry for not dropping this topic quickly i keep having more thoughts on it. really Bruce and Talia getting back together would be one of the worst things to happen. You need to remember Talia is a monster on par with The Joker in a lot of ways. There’s a reason Damián refers to her as the most deadly women in the world (although that’s really Lady Shiva) not only does she have a massive body count, she primed Jason and used him as a weapon against Bruce, Framed batman for murder, put a massive bounty on Damian. Also it was cannon till reboot that Damian’s conception was not consensual on Bruce’s part, and on the other side Bruce was told by Talia she miscarried there baby and left him. then there’s the fact that Talia wants a Batman who kills as her partner.
so ya the restart of this romance would not be a good thing at all.

I got back into DC comics during Rebirth and now I feel like a old man telling these new kids to read a real book for once. I’m in my early 20s, I’m not even that old!

I’ve been reading since Infinite Crisis, so that…that doesn’t help.

He did not (on paper) Sleep with wonder woman during the 47 years they took the Gentlemen’s place…he did consider it though.

That arc was part of why I considered them to be not fully monogamous, actually. The way that Selina toyfully teased him if he did something “bad” didn’t seem to come exactly from jealousy.

Outside of the regular publishing stuff, I imagine that part of it is also that DC is doing another small event with Trail of the Amazons around the same time and they didn’t want the two to directly compete with the other. That event also had a two-week break so that they could start up Shadow War.

Oh man…you had to remind me about Catwoman: Guardian of Gotham…

So much melodrama…so much cheese…SO MUCH CHEESECAKE. It’s so awful. It’s so glorious.

but my two cohosts and I podcast about Batman comics here.

Oh snap, I think I’ve listened to that one before, or at least one of them in that podcast family. Cool!

really Bruce and Talia getting back together would be one of the worst things to happen. You need to remember Talia is a monster on par with The Joker in a lot of ways.

She has been in recent years, though I think they’re trying to reform her and give her a proper face turn between the events of Robin and Shadow War.

And this might be something that sticks for a hot minute, considering the cover for June’s Detective Comics: 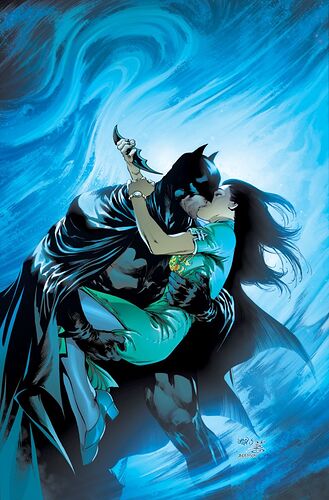 I don’t really have a horse in the race with regards to Talia and her evilness but I know she has a lot of fans who despise almost everything that’s been done with her in the past two decades as blatant character assassination and I’m fully willing to let them agree to ignore all that and restore her to original characterization.

That reminds me, remember the time that Grant Morrison couldn’t be bothered to read a book they were planning on putting back into continuity and turned Bruce and Talia’s consensual sex into something very nonconsensual?

I’ve been in a really meme/gif mood today, I just realized. Sorry if that’s getting annoying.

In Morrison’s newsletter last month, I hear there were some more details on that. Still pretty frustrating. Especially when you get fans who started in the n52 and then claim that Morrison was “being consistent with past characterization”.

In Morrison’s newsletter last month, I hear there were some more details on that. Still pretty frustrating. Especially when you get fans who started in the n52 and then claim that Morrison was “being consistent with past characterization”.

actually, it kinda was consistent given Talia frames Bruce for murder in the same year she was introduced in 1971. She may betray her father to save Bruce back then, but she also seemed to be playing one against the other. she could have left Ra’s earlier. also, I recall that consensual sex was used in order to manipulate Bruce to help her father. and when she realized bruce would not be batman with a child she says she miscarried and annuls their marriage…and may have also stolen Bruce’s plans to neutralize the Justice League at this time. however, the saying she miscarried was actually worse for Bruce than if she did take him nonconsensually.

as to the cover. covers do not always denote things in the book a good case is JLA: Act of God’s final issue which shows Catwoman on the cover yet does not have her in the book. however, that could also just be bruce giving her a last kiss.

Then again Bruce is also supposed to die in justice leauge 75.
PS: the wonder woman thing…it could also be interpreted as Selina knowing bruce would not cheat on her.

Droppin’ Catwoman: Guardian of Gotham for anyone who is curious what’s up with it: 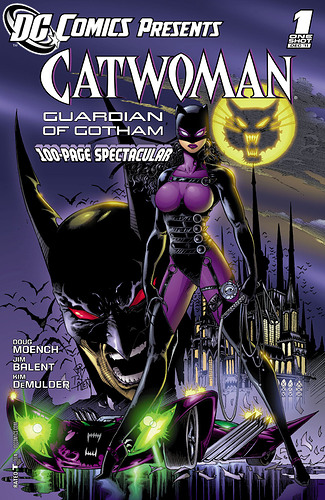 Catwoman is the protector of a darker-than-ever Gotham City—and she must protect the city's criminals from the murderous vigilante called the Bat-Man!...

A slice of Balent-flavored cheesecake does one good.

I really need to finish this…it is one of those comics that’s so bad it’s good.

There’s a difference between the deeds Talia was doing in her games/battles with/against her father and Batman, and her attempting to destroy the world and murdering her son.

This isn’t really relevant to the conversation but I love the colors and Talia’s dress in that cover, it’s incredibly gorgeous.

It’s been great so far…I like the revamping of the Ghuls. Ras has been looking great, and Talia is a bit softer. I think villains are better when they are morally ambiguous…they aren’t wrong about needing to save the world, its just their methods (Poison Ivy is another great example of this…I mean, she’s not wrong)…Pretty incredulous that Deathstroke knew it was an imposter by just watching a video, but no other fighting experts (Batman, Talia) noticed…and that kiss!!! Selina, I love you, but in real life…love gets complicated…

She has been looking really beautiful starting in the Robin series…Ras has been very dashing as well!! Love their new image.

This isn’t really relevant to the conversation but I love the colors and Talia’s dress in that cover, it’s incredibly gorgeous.

I think villains are better when they are morally ambiguous…they aren’t wrong about needing to save the world, its just their methods (Poison Ivy is another great example of this…I mean, she’s not wrong)…

I agree on that front – I felt that Talia was much more interesting and complex before her massive heel turn. Though to their credit, Morrison did try to give Talia more depth as a villain during his New 52 era run of Batman Incorporated.

Ras has been very dashing as well!!

Yes, though he’ll never be as dashing as he was in this: