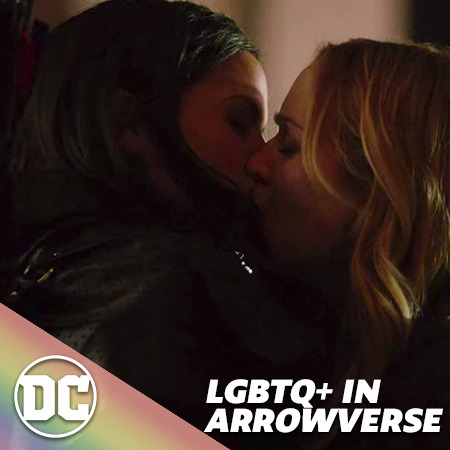 Though the Arrowverse has featured dozens of LGBTQ+ characters over the years, there was a time early in its run where this sort of representation was nowhere to be found. But with one kiss, two women would change all of that.

As part of the Pride Month celebrations here at DC Universe Infinite, the Arrowverse Couch Club is proud to host a watch-along for the episode of Arrow that brought queer representation into this universe: “Heir to the Demon.”

With many people arguing that Arrow’s second season remains its best, it’s safe to say that we’re revisiting the show in its prime. This season was marked by the Arrow’s ongoing struggle against the Church of Blood and its use of the Mirakuru super-soldier serum, which he was unaware was being controlled by Slade Wilson at this point. Oliver was also at this time dealing with the return of Sara Lance, his thought-to-be-dead former lover who had been trained by the League of Assassins and returned to Starling City as the vigilante known as The Canary to watch over her family…and that’s just the beginning of her story.

Amid plenty of Lance family drama, Sara’s lover from Nanda Parbat, Nyssa al Ghul, would make her debut in this episode in an attempt to bring her beloved back to the League. Their kiss here was not only the first same-sex kiss in the Arrowverse, but also the first confirmed instance of any LGBTQ+ representation of any capacity in this world. Though Nyssara wasn’t quite meant to last, Sara would ultimately find her person in Ava Sharpe and continue to be a bisexual icon for years to come.

If you’re not yet a member, be sure to join the Arrowverse Couch Club! We’ll be hosting another Pride-themed WAL for Supergirl on Saturday the 26th to commemorate the debut of Dreamer, the first transgender superhero on TV. We’re also continuing our weekly discussions of new episodes of Legends of Tomorrow, Batwoman, The Flash and Superman & Lois, with Supergirl and Stargirl also returning in August. Click here for more information and here to join! No big deal, just Chyler casually confirming she tried to get a kiss between Alex and Lena

Just for the record, I am here for the Couch Club first and the pride stuff second.

No big deal, just Chyler casually confirming she tried to get a kiss between Alex and Lena

What?? Bookmarked!! Thank you @Mae!

I also conveniently forgot it was next Saturday because I was looking to overdose on watchalongs. Between the Superman day marathon and the weekly late night watch, it would have been great.

Just about 8 hours to go!

Just 10 minutes left! Who’s ready to kick this off?

what a snazzy hat you have…

You don’t have Nyssa…she has you

That publicist is Krychek from X-files

Laurel in a hospital bed…this brings back bad memories