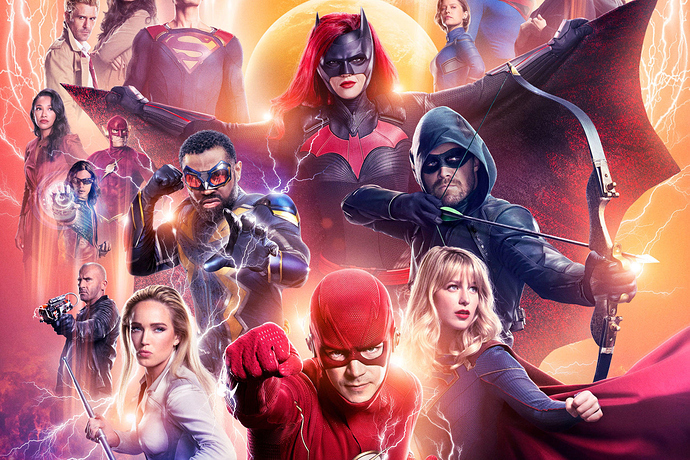 Arrowverse2070×1380 633 KB
Welcome to DC Universe’s Arrowverse Couch Club! This is a club where fans can come together to discuss the newest episodes of the CW’s DC lineup of shows: The Flash, Supergirl, Legends of Tomorrow, Batwoman, Black Lightning and, of course, Arrow (RIP).

We’ll officially kick off the meetings in the first weekend of March, but in the meantime, feel free to introduce yourself! I’m really interested in hearing about everyone’s connection to the Arrowverse:

Click here to join! If you have any questions, concerns or general feedback, feel free to message @arkhamassassin directly.

The Crisis may be over, but we’re just getting started. Join today and together, we will not fail this fandom.

When did you start watching?

I started watching Arrow during season 2 when a friend recommended it. I was hardly watching any TV at the time, but between the great reviews it was getting and my growing love of DC, I decided to check it out, and I was hooked from the start. In fact, not only can I credit Arrow for starting my journey into this specific universe, but it also sparked an interest in wanting to explore a lot of other shows, so I can really credit Arrow with jump starting my ongoing TV obsession.

Which show is your favorite?

While every show has offered a lot of things that I love, my favorite is definitely Legends of Tomorrow. While I definitely enjoyed the 1st season, it was season 2 that really cemented this as one of the greats for me. I absolutely love how the show gets crazier and crazier with every season, all while maintaining both its hilarity and heart.

Who’s your favorite character? (or characters if you can’t choose just one)

With so many characters established over the years it’s really difficult to pick a favorite, but if I had to, I’d say that it’s Sara Lance. Though she doesn’t have a direct counterpart in the comics, I’ve been fascinated by her journey from going down on the Gambit to a full-fledged assassin to the captain of a time ship and one of the faces of the Arrowverse. Some of my other favorites include Lena Luthor, Reverse Flash and John Constantine.

What do you love most about the Arrowverse?

I think my favorite thing about the Arrowverse would have to be how these shows have been able to build up to a legacy that’s even greater than the sum of its parts. I love all the shows individually, but the way they can all work off of each other in this interconnected universe makes the watching experience even better. Whether it’s something as small as hearing a character from one show mentioned on another or as giant as Crisis on Infinite Earths, the way that the Arrowverse has connected so much of the DC Universe has just been an amazing experience to watch unfold. I feel incredibly fortunate that I’ve been able to watch it happen before my eyes, and I know that I’ll continue to do so for years to come.

When did you start watching?
I started with Arrow season 1 and have been watching all of the CWverse shows.

Which show is your favorite?
This is a tough one. I think it might be a toss up between Black Lightning and LoT, with Flash getting a very honorable mention.

Who’s your favorite character? (or characters if you can’t choose just one)
Another tough one. Let me try to stick with one from each show, but that just makes it harder: Kara, Cisco, adult William (though i also really like Alexei), the Pierces (i like them as a family unit). I am still deciding with Batwoman, but Kate is currently the front runner.

What do you love most about the Arrowverse?
I just like being able to watch a show on television about superheroes. That there are more than just one show just makes it “all the more better.” Also, it’s where i get my version of a soap opera.

Great choices. I love how these 2 shows are, in many ways, a study in contrasts. Where Black Lightning presents a pretty serious look at a lot of racial and social issues and, for my money, has been the most consistent show, it feels like Legends couldn’t get more insane w/ all their time-traveling hijinks. But even though they might not have a ton in common on the surface, it just goes to show that w/ the proper care and attention, you can make a lot of different approaches for a show work out

I liked LoT’s 1st season trying to be serious despite Hawkgirl’s consistent “i was a barista the other day” and Hawkman in ancient Egypt sounding more like the 20th century: “yo, i bring you riches.” I also liked that they did a version of Fantastic Voyage, shrinking down to get injected into someone’s body to help fix them from the inside and conversely Atom did giant Atom (that might have been a later season). That they changed the tone to something lighter made the show tighter. Plus, i seem to have a thing for misfits teaming up.

I agree that Black Lightning has been very consistent. I like that it is more street level and also my biggest soap since season 1 was as much about Jefferson trying to get back with his wife as it was about him putting the suit back on.

i was a barista the other day

Ah yes, the slogan of LoT season 1. I definitely liked the first season, but there’s also little denying that the show’s only gotten better from there

the show’s only gotten better from there

I feel like season 1 played things relatively safe compared to the rest of the series, but the writers seemed to really embrace the insanity of time travel in season 2 and have just kept making it crazier and crazier. That’s not inherently going to make any show better, but they just have so much fun with the possibilities and the writing is still smart, though they also don’t take themselves too seriously either.

Plus I’ve thought that having Sara take over the Waverider after the first season was a brilliant decision. She’s more than capable enough to lead while not becoming overly serious and losing touch with the misfit, wackjob nature of the crew

Sara knows she is just as much a misfit as the rest of them. her leadership skills have grown almost exponentially. I can see her making some sort of birds of prey reference should she team up with Supergirl and Batwoman for some odd reason.

Losing Ray and Nora is definitely gonna hurt, though I trust that the writers have a legitimately good reason for writing them off. At this rate, I’m wondering if Ryan’s even gonna show up this season. I’m still sure that he’s gonna become the new Atom, but I also feel like they would’ve announced by now that Osric Chau would be appearing

Ooh this is a great idea for a club, and ultimately it would be interesting to do a complete rewatch of the whole franchise eventually. However, I am still catching up myself, but I have been using the following guide to make sure I watch everything in order:

Sometimes it’s hard to comprehend the scope of this universe until you see the literal hundreds of episodes stacked up right before you. I’ve watched just about every one of these and it still looks intimidating as all hell. It’s great that you have everything all in 1 place like that for catching up

Yes, I came into the series late, after The Flash premiered, and have been binging all of it on Netflix. Since I don’t watch it live usually, I’ll have to wait until all seasons are over and available for streaming to catch up. Season 8 of Arrow is already up on Netflix, they drop right after the season ends, and Batwoman should be on HBO Max, which I’m also getting (should be for free since I have regular HBO with AT&T).

But yes it is certainly overwhelming. I wonder if anyone would actually ettempt a complete binge of the entire Arrowverse from Arrow Season 1 Episode 1. Or if you want to be super nitpicky, add The Flash (1990) beforehand

Or if you want to be super nitpicky, add The Flash (1990) beforehand

That’s actually an interesting perspective - after all the other worlds shown on Crisis, you could argue that an Arrowverse binge would actually include much more than just the core shows. You could throw in Smallville, Birds of Prey, '89 Batman, '60s Batman, Titans, etc.

I’m behind this week, but i am looking forward to having a space to talk about these shows.

This is a great idea! I watch everything so it is great to have a place to talk about it.
I started watching with Arrow season 1.
My favorite show is Legends of Tomorrow, with Flash being a very close second.
My favorite character is Sara Lance. Though I will say my second favorite is whoever Tom Cavanagh is playing. (I love his rotating cast of Wells and Reverse Flash)
What I love most about the Arrowverse is just the overall fact that it has gotten this big. If you had told me during Season 1 of Arrow that there would have been enough shows to do Crisis on Infinite Earths, I would have laughed. It is just great to see how much it has all grown. And how all the characters have come together.

Though I will say my second favorite is whoever Tom Cavanagh is playing.

Cavanagh has been an absolute blessing for The Flash and the Arrowverse as a whole. Even though I’ve actually come to prefer Matt Letscher as Thawne, he still did an amazing job in the first season, and I’ve just been blown away by the range of different Wells that he’s played since then

I am a little upset that we aren’t going to be getting new Wells characters each Flash season now, unless Earth-Prime finds the other universes soon. But still, I’m hoping Tom sticks around to play whoever he wants.

I’m sure it’s only a matter of time before the new multiverse starts crossing over w/ Earth-Prime, though I’m not sure if that’ll automatically mean they’ll go back to cycling out a different Wells each season