Are You an Artist? If So, Who Are You & How Long Have You Been Drawing?

I really admire artists, and I look forward to making friends with some. Hopefully maybe even collaborate with someday.

All my life! I’ve been drawing comics I think as early as I was 6 (at least I think so since I still have a copy of my first comic book!)

Honestly, same here. I’ve been drawing as long as I can remember, though I’ve only taken it beyond doodles for the past six or seven years and it’s just recently I’ve tried medias outside of watercolor and colored pencils.

I don’t know if I can call myself an artist. I’m 26 and I’ve been cooking since i was 18. But i’ve been a dc fan since the animated series. Where was i going? OH yeah, I just recently got sick of the kitchen and I’m starting my childhood dreams of learning to draw. I’ve picked up classes at Udemy Academy online, and I hope to be able to join the DC comic ban wagon one day!! I’m late to join the party and I’ll be an old man before i’m able to draw a good comic probably, lol

It’ll be ok if you’re​ old by the time you reach success, same thing happened to the King Jack Kirby. Keep at it!

I’m 36. I was really into drawing / penciling in my teens and early 20s. Then I stopped for 10 years. I started up again big time in August 2015, and have been self-teaching using tons of art books and YouTube videos to try to master all the different techniques. I have seen a lot of improvement in my drawings in the last 3 years of drawing part-time.

I started drawing back when I was in 6th grade and I got really into it. My best friend and I would draw cartoons of animals ad people all the time together. However, for a while I got out of it and focused on my schooling and other creative branches. I recently got back into it though, and I’m now way more serious about it than I was when I was back in middle school, so I’ve been researching more techniques and mediums, and it’s been a lot of fun so far. I hope I can do more with my drawing and other creative passions in the future, too.

I’m currently an artist, creating graphics and marketing materials for my local library. I’ve been drawing since I was a kid. I exhibit at some of our local comic cons. I had the privilege to meet and have a couple of pieces reviewed by Neal Adams—it was def a great experience!

I love drawing. The best part about it is that you can literally make anything you want at your own fingertips. It’s pretty awesome. I wanna draw a really good Resurrection Man or Hawkman story for DC one day. Maybe a story about them both since they both seem to reincarnate all the time.

I’ve been drawing ever since I could remember starting out with Dragon Ball Z and Batman doodles as a child. I eventually went to art school and I now work freelance as a Character Designer and Illustration artist. I’m currently looking for freelance an d in-house (animation) opportunities as well! Feel free to check out my work!

I’m 13 I started drawing a year ago and now I draw in almost all my free time.

I’m 27 and I’ve been doodling as far back as I can remember but started taking it seriously after high school. I mostly do storyboards right now but I’m working on developing some indie titles with some close friends and I always love trying out new things!

I’m an illustrator and graphic designer, with several indy comic credits. I’ve been drawing pretty much since I could hold crayons, but I started seriously developing my skills at about 12. I’ve been a “professional” in one form or another for over 10 years.
instagram.com/georgeamaru/

I’ve been drawing since I was little. I even have a degree in graphic design. So many sketch books lol

I am an illustrator/graphic designer. I’ve been drawing since I was like 3, but started taking it more seriously when I was in junior high. Majored in art in college. Have been trying to break into Comics for a while now. I’m working on my 1st independent comic… as in writing and drawing. I love drawing and always have. That isn’t to say that it’s always easy for me. I can get quite frustrated with it and myself, and my lack of progress. But any road worth taking isn’t going to be an easy one.

Just like a lot of the other commenters, I’ve been drawing pretty much ever since i was able! But it was never just random doodles. I’ve always made comics for as long as i can remember. I recently graduated from the Joe Kubert School and have spent the time since working on a few different indie books and anthologies. Comics are a tough biz to break into but man its great.

I am a professional graphics artist, and have been working as an artist since 1980. I learned to draw by reading comic books, specifically DC comics, as well as some Gold Key and Marvel books. I have been an avid comic collector since I was 3 years old! My favorite character has always been Batman, and my favorite artist growing up was Curt Swan and Neal Adams. My art style is very much influenced by both, as well as John Buscema, Steve Ditko, and Will Eisner. I grew up in the 60’s and 70’s, so all of my influences were from that time period (or before). In my early teens, I wrote and drew comic books for my personal enjoyment using DC characters, as well as characters I created. I enjoyed drawing more than anything - so much so that when I was very young I decided I wanted to work in the comics industry. But I never pursued it when I got old enough to choose a career - I just didn’t feel confident that I could sustain the creativity necessary to be successful as a comic book artist. I did, however, pursue a career as a commercial artist, and have been working in that field for 38 years. I love my job, and since the late 1990’s I have transitioned over to using computers for most of my art.

Like everyone who ever replied to this question, I was drawing since I was a kid. My dad was a tattoo artist and his mom (my grandma) was a famous wild life painter. My dad had comics all over the house and I can remember, since I was little, that there really wasn’t any career for me other then drawing comics. Dad taught me a lot, I taught myself alot more. I made the decision to not go to art school after I graduated and just submit portfolios of sequential art until a company hired me. I’m now 23 and I’ve made 3 separate submission packages and I’ve been to 2 conventions. I haven’t submitted or shown anything.
I think the reason for this is that I’ve been working some really crappy jobs in order for me to practice my craft and pursue comics, and I’m afraid that as soon as I get that first rejection letter, I’ll cave and get a real job and give up on my dream.
I know I have to face this fear soon, and realize that no one in the industry has an easy go of it at first.

My name is Jon Gum, I’ve been drawing since middle school. So about 15 years. I’ve always wanted to draw comics as a kid and now I’m buckling down to actually do it.

I’m making several graphic novels. This is my one of my characters, Carpenter: The Vampire of Red Hook. 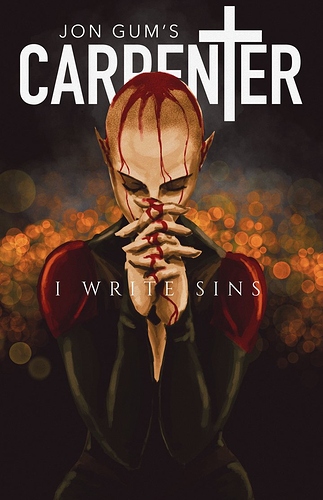 I’m an aspiring artist, I’ve been drawing since I was about 4 years old!!!