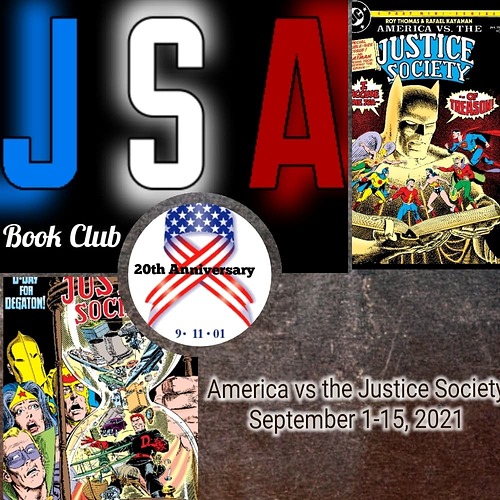 Hello everyone at the ole @JSABookClub and welcome to our first September session. This session we will be reading and discussing the miniseries America vs the Justice Society. It was written by long time JSA scribe Roy Thomas and Dann Thomas with pencils by Rafael Kayanma, Rich Buckler and Jerry Ordeal. In this story the diary of deceased JSA member Batman seemingly implicates the rest of the JSA of treason during WWII. So did they commit treason or is there something more at play here? Let’s find out.

* America vs the Justice Society #1-4

And that’s all he wrote for this session. Next session we will be taking a look at the first story from the JSA All Stars series: Constellations. I look forward to seeing you there.

I noticed that as well @Don-El. I thought it was nice of em to tell us it was only in black and white too.

While continuing to read this selection, I just realized and noticed that the Earth 2 Superman of the JSA was never Superboy!

Been having a lot of internet problems due to Ida and stress at work. When I read this months ago I remember having my suspension of disbelief broken that Spectre and Dr. Fate needed Superman’s help.