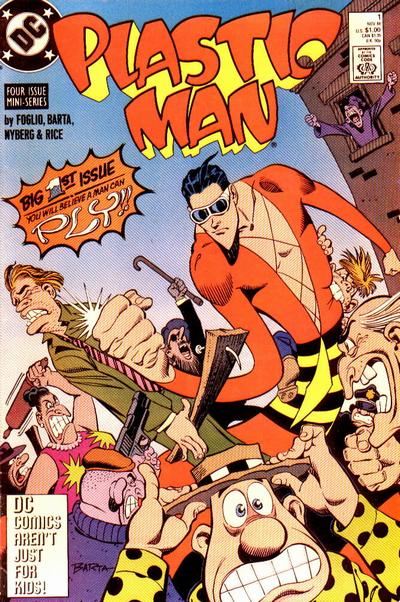 Welcome to the extra-length inaugural installment of the Acquired Taste Book Club! We’ll be running to Friday the 8th since I want to do this on Fridays but I was excited to get started. Since Quality Comics was the first company whose characters DC acquired, they’re first up in our rotation. Specifically, we’ll be talking about Quality’s best-known creation, Plastic Man! In this miniseries from just after the Crisis on Infinite Earths, Plastic Man gets his start in the new continuity and proceeds with his own brand of slapstick adventures.

Next week: Get ready to rev up your Wisdom of Solomon, because Week 2 will be here so fast you’ll swear it had the Speed of Mercury! And something something Stamina of Atlas.

I remember this series. Can’t wait to revisit my pal Woozie Winks!

I suppose I’ll get the ball rolling here:

Well, I just realized I phrased this ambiguously, so I’ll answer it both ways it could be taken (though I meant B):

A. In general, he does stand out as an ex-crook, since most heroes are generally people who started out on the straight-and-narrow.

B. As portrayed here… eh. It’s probably the weakest of the four issues, since it doesn’t seem to know whether it’s going for drama or laughs. And the jokes seemed to kind of fall flat in that issue just in general.

Well, like I said, I wasn’t really feeling it in the first couple issues, but it hit its stride as it went on. The cartoony, Loony Tunes-ish style suits Plas pretty well. I’m still more partial to Justice League International and Young Justice, though.

I gotta say, I’m still on Team Ralph, personally. I mean, Plastic Man is kind of fun, but I love Ralph and Sue’s whole Nick and Nora Charles dynamic and I’m a sucker for a good detective story.

Funnily enough, I had read this not that long ago from the regular DCU Book Club. Overall, not a bad story, though definitely not my favorite take or even favorite mini-series for Plastic Man.

"What do you think of Plastic Man’s origin?

Visually, it looked great – I liked the idea of this book of having a more standard comic book superhero for that initial bit and subsequent little jumps back to reality, but the world of Eel and Woozy after the accident is all Tex Avery style antics.

I also liked how Eel didn’t realize what was going on and how he met a confidant in Woozy.

“Which issue was your favorite?”

I remember #3 with the trip to California and it’s wizard protector the most. Got a few good chuckles from that.

“A question that comes into play with any more comedic work: Is it funny?”

Is it the funniest thing I’ve ever read? No. Did I get some good laughs from it? Sure.

“Alright, real talk. Plastic Man or Elongated Man? The League doesn’t need two stretchy guys, but which one do they need?”

@BatJamags, I see what you’re saying about Ralph and I definitely like what you’re talking about. However, I will say that Eel’s origins of being a former crook and being on a slightly zany but overall sincere road to redemption is a pretty good hook as well. And while Ralph has had some good stories, I think Plastic Man overall has had a much bigger impact over the past few decades than Ralph.

I mean, think of it this way – when they adapted Ralph Digby for The Flash, he was basically a mix of the two, with Ralph’s overall power and Eel’s sense of humor and more scumbag past. Hell, he even has glasses similar to Eel’s on his final costume!

It’s funny, this question also reminds me of when I first saw both characters for the first time, which was in the pages of the…infamous Dark Knight Strikes Again. Always thought their little rivalry was pretty funny. 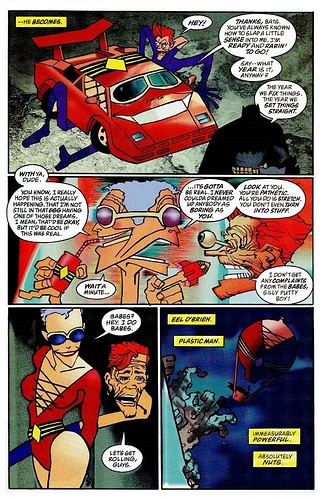 I’m ’ a just jump in for a sec on the Ralph/Eel question. I’ll pipe up more when I finish re reading the series.

MY NAME IS RALPH!

What do you think of Plastic Man’s origin?

I dig it. It’s the classic bad guy makes good tale. I like how what happens to Eel makes him see the world in a cortoony, campy sort of way. And that Woozy is just so crazy he sees it that way, too!

Which issue was your favorite?

I agree with y’all that #3 olds up the best. I found myself reading the old wizard in the voice of Larry David. It totally works!

A question that comes into play with any more comedic work: Is it funny?

I chuckled at least once in every issue except the fourth. There were parts near the end that were humorous, but for the most part it was hard for me to laugh when the plot involved homeless people.

Alright, real talk. Plastic Man or Elongated Man? The League doesn’t need two stretchy guys, but which one do they need?

I’m team Ralph all the way. Yes, it’s partly because we share the same first name, but also I just think he’s most suitable to the “real world” elements of the rest of the DCU. Plas is, at his heart, a funny, slapstick sort of character which makes him hard to get right in a lot of stories. Ralph can be both serious or ridiculous depending on what’s called for. I’ve been reading The Terrifics on here, though, and I have enjoyed Plas in that quite a bit.

1. What do you think of Plastic Man’s origin?

I liked it. Given how tragic most hero or villain origin stories are it was really nice to see one that wasn’t and one that also didn’t take itself too seriously, I guess is the phrase I’m looking for.

2. Which issue was your favorite?

I liked the first issue the most. The part where Eel and Woozy were flipping a coin to decide whether they would be heroes or criminals was my favorite part of the issue.

3. A question that comes into play with any more comedic work: Is it funny?

I’ve been watching a lot of slap stick comedy lately so yeah I found the book to be funny overall. Things don’t have to be full of f-bombs and such to be funny and the slap stick brand of comedy is one of my particular favorites.

4. Alright, real talk. Plastic Man or Elongated Man? The League doesn’t need two stretchy guys, but which one do they need?

Definitely Plastic Man. The JL takes themselves far too seriously.

I don’t know if I fully agree with that – yeah, it’s displayed in a more comedic sense, but still we have a character with an awful past being basically abandoned and left for dead after a horrific accident that makes him monstrous at first.

Plus, I think the best takes on Plas tend to have a hint of tragedy to them – Joe Kelly’s take on him in JLA comes immediately to mind. The Gail Simone mini-series that similarly covers this period I think does a far better job with Plas as a character.

I was more talking about his overall reaction to what happened. He doesn’t turn into this sullen, gloomy, grim dark figure who broods over what happened at every opportunity. After his initial bout of depression he bounces back and takes things in stride instead of letting the incident weight on his conscience like a lot of other characters seem to.

I like them both, but I do like Plas more. I grew up watching his animated show and I love the Jack Cole comics. Hilary Bart’s and Kyle Baker also did really good ones as well. Plus, he’s the original stretchy hero, he should be in the pantheon!