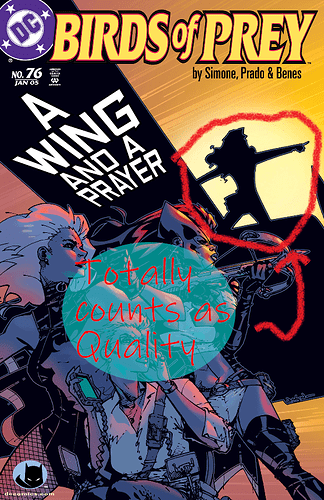 Welcome to the Acquired Taste Book Club! And I lied! Right through my teeth.

Last time, I said that we’d focus on Plastic Man next week, and here we are, more than a month later, not talking about Plastic Man. But trust me, you’re in for a treat anyway.

See, Quality Comics’ other major characters were Blackhawk Squadron, an international team of WWII-era fighter pilots, and one of them (actually introduced after the DC buyout, but still) is Lady Blackhawk, who in the ‘90s crossover event Zero Hour wound up in the present, where she joined the Birds of Prey, and Harley Quinn is getting a movie and they called that Birds of Prey for some reason, which all basically adds up to an excuse to make you read my favorite book!

And if you think that’s tenuous, watch me shoehorn Birds of Prey into Fawcett Week next week.

Next week: No, seriously. You think I’m kidding? Just watch. We’ll even fit Harley in. Barely.

Looking forward to reading this! I’ve read a good chunk of early Gail BOP, but I don’t think I’ve read up to this point, so this should be fun.

By the way, not to spoil anyone else’s schedule, but if you’re curious what’s going on with Oracle in these issues, my own information network has just turned up a lead that at least one other club is doing the arc immediately preceding this one sometime in the next couple weeks.

So jumping in from having never read any Birds of Prey before but being familiar with most of these characters from other books I found this a pretty good read.

I thought the addition of Lady Blackhawk (the character I am least familiar with) felt natural. It didn’t feel forced at all and served a purpose with the new direction the book seemed to be taking. She also showed intuition staying under the radar in the Harvest arc.

And I did like the Harvest arc. They didn’t quite explain who Harvest was other than her background. No real origin of powers or anything like that. Why does she need someone to be named? How does she know when someone invokes or calls in her? How do her powers work?

None of the artwork stood out me. It was good enough just didn’t stand out.

And yes, this series, or at least these issues were good. Although being Gail Simone, I didn’t expect anything less. She had been a fantastic writer access many different series.

Interesting bit of inside baseball is that in the first issue with Oracle’s Clocktower base destroyed, not only did that not happen in previous issues of this book, it happened during the infamous War Games event, but Gail Simone has said that she actually had no idea that the Bat editorial was going to do that and was pretty pissed off at the time. I feel like this gives the last line of #75 some interesting meta weight to it. 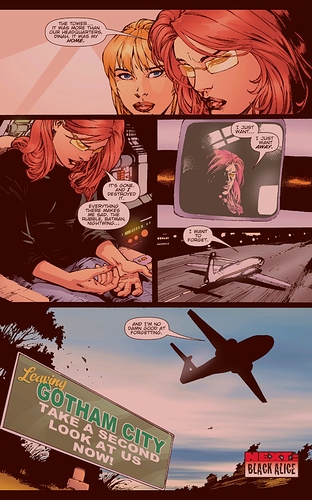 Yeah, I was mad just reading it (I happened to be reading Robin and Nightwing concurrently with this book, so I ended up paging through War Games to get caught up on the tie-ins because I’m apparently masochistic enough to read both Devin Grayson’s Nightwing and Batman: War Games at the same time). Must’ve sucked to be the writer and get caught by surprise with such an unnecessary bit of destruction. The Clocktower was cool. Dare I say even cooler than the Batcave?

because I’m apparently masochistic enough to read both Devin Grayson’s Nightwing and Batman: War Games at the same time

Ironically enough, I think if someone were to do that to you it would also be considered a war crime.

Well, we’re here for Zinda. What do you think of her in these issues?

I really like her. She has a sort of sass that the others lack, and I like how laid back she seems once she quits her job. (Waiiiit a minute…maybe we’d all be more laid back of we quit our jobs!)

Which arc was your favorite?

While Thorn was my favorite of the baddies, my favorite part of this arc was Harvest. Probably not a coincidence that’s the one where Lady Blackhawk contributed the most.

This was all what I’m think of as mainstream comic art, so it all blends, however I do enjoy Benes. He’s like a good journeyman.

And also do you see why I love this series so much?! (If you say no, I won’t be mad, just disappointed.)

Hard not to like Gail Simone; I miss her DC stuff. Her run both here and on Secret Six were both really, really, really enjoyable.

Little late, but hope you don’t mind my throwing my thoughts out.

Well, we’re here for Zinda. What do you think of her in these issues?

She’s fun. Outside of the back-up in #75 that shows her background, she doesn’t really get a huge focus, but each small “arc” gives her at least something cool/funny to do. I like that while she has a similar “(wo)man out of time” thing that a Captain America has, she still has her own personality and quirks.

Which arc was your favorite?

Oof, that’s a hard one to decide, because there are things I really like in all three. I’ve liked Black Alice back in Secret Six, so seeing her origin was really cool. I liked the complicated moral quandary of the middle arc, even if the super-powered antagonist of it was a little bland. The Rose/Thorn story itself was okay, but the character beats for Huntress, especially her confrontation with Barbara at the end, was fantastic.

I’d definitely say Ed Benes. I get that he’s considered “problematic” nowadays, but he draws the best action and character beats. I feel like the other artist for the middle arc was kind of sloppy.

And also do you see why I love this series so much?! (If you say no, I won’t be mad, just disappointed.)

Absolutely. While I have liked later takes on the BOP, I feel like this initial Gail Simone run is definitely the ultimate, iconic take on these characters.

Little late, but hope you don’t mind my throwing my thoughts out.

No problem at all. I’m going to be late too, because I kinda got distracted and started reading from #1 instead of #75.

OK, here I am. I might even catch up to this week’s assignment in time to read it.

Zinda is the best and one of the reasons I love this series so much (though it was always good).

I liked the one with Harvest. She was just the most interesting of the “bad” vigilantes.

Honestly, I remembered the Harvest arc standing out, but it’s nothing that exciting on reread. The flashback story in #75 with art by Eduardo Barreto looked really nice, though.