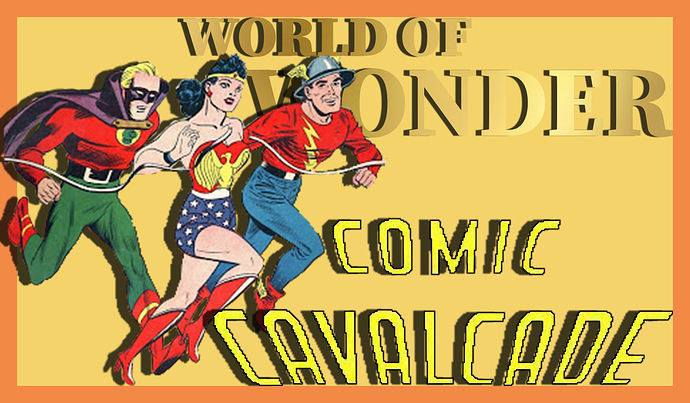 World of Wonder will be delving into Comic Cavalcade this week. This is an older comic so just be aware that the transition from the physical to the digital realm isn’t the best.

We’re also nearing 1 Year of World of Wonder on July 31st and I’d like to hear from you, who have been a part of this Wonderful World with me, what you’d like to see for the celebration of that milestone in August.

This is an interesting book to read so far. I believe the description for the issue talks about the varying quality of pages and they aren’t kidding. Some panels are legit hard to read. But the nice thing about having really simple stories during this time means even if a panel isn’t all the way there, you can still kinda figure out what’s going on.

The Wonder Woman story that starts this is decent. I kind of feel like this run loses something when it tries to be more grounded. It’s more fun when the the threats are truly fantastical. 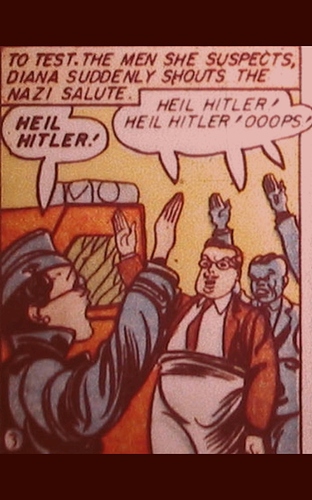 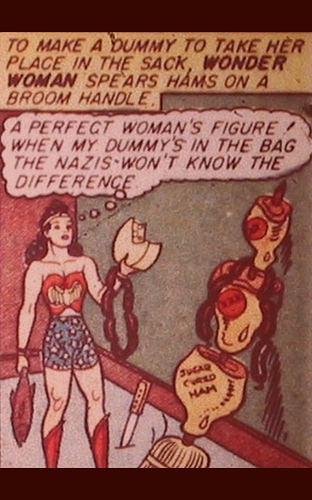 I see what you did there with the “sugar cured ham” there. I see it. Also I can’t help but be reminded of: 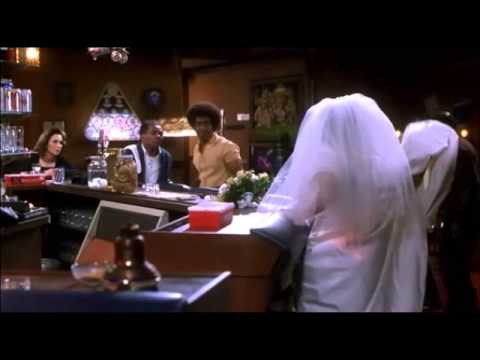 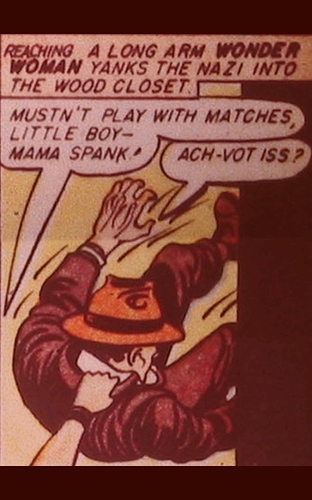 I’d say she was talking to Golden Age Batman, but let’s be real, she’s WAY kinkier than him. 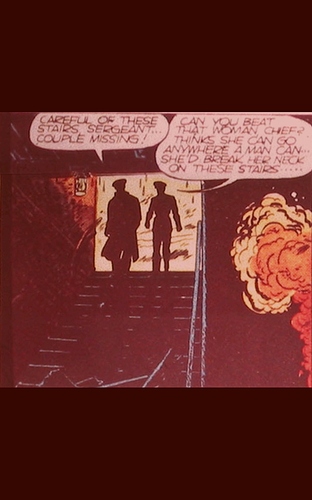 It’s kind of a shame that we go from a Wonder Woman story to a story that almost immediately goes into “hurr hurr women can’t do things men can hurr hurr.” Also, had anyone here heard of Red, White and Blue before reading this?

I see what you did there with the “sugar cured ham” there. I see it. Also I can’t help but be reminded of:

I’ve actually mostly read the more “grounded” stories from this time so I can’t really say that it loses anything compared to the more fantastical stories. I just gotta read some more of the fantastical ones then!

I believe the description for the issue talks about the varying quality of pages and they aren’t kidding.

I didn’t realize it was in the description, but this is probably the worst digitization I’ve seen. Despite all of that, I’m glad they still got a digital copy of it.

I remember when these issues first appeared on ComiXology in the lead-up to the Wonder Woman movie. I was so disappointed in the quality of the scans!

Oof. I don’t mind the quality at all for a book that’s included in my subscription, but if I had to pay for the single issues

On the other hand, this book was a great deal in 1942. For the equivalent of $2.40 in today’s money, you got essentially 100 pages of content, consisting of nine complete stories!

I appreciate being able to pick up a comic and have the full story right there, not having to collect 6 books with a plot that is stretched way too thin. Especially for the prices comics go for today.

Going further into it, another group of characters I never heard of until this was The Ghost Patrol, where their power to become intangible takes second fiddle to the fact that the entire story is basically the three doing the Bugs Bunny act to Hitler, constantly humiliating and blowing him up, which I am 110% for. These guys could use a comeback.

(Also, we can say Hitler, but not his first name? …Weird flex, but okay.)

…But then we get this “Minute Movies” thing. I’m confused by this – are these actual condensed versions of movies that were releasing at the time? Also the “movie” for this issue, “Fingers of Fate” was…a thing. A very, very creepy and racist thing. It’s just so dumb too, like, if this girl washed up on the shore and the tribe took her in as one of their own, why was she putting herself in blackface? What was the point of that?

The Ghost Patrol was new to me too. I was already thinking about how they could be reintroduced into canon. I actually liked them, but the whole issue is basically reading multiple types of accents so it took a bit to get through. I could see these three teaming up with Boston Brand or the JLD.

but the whole issue is basically reading multiple types of accents so it took a bit to get through.

Oh yeah, they really leaned on that accent thing, to the point where I had to read some word balloons a couple of times to figure it out. I’ll say this much: I’ll never complaint about Chris Claremont’s love of writing accents again, because this one takes the cake!

…But then we get this “Minute Movies” thing. I’m confused by this – are these actual condensed versions of movies that were releasing at the time?

Minute Movies was the same size and shape as other comic strips, but was divided into two tiers. This made the panels very small (or “minute”, in keeping with the title) but allowed Wheelan to cram a lot of them in. He covered every genre of film — pirate stories, westerns, detective stories, even short subjects and newsreels, all supposedly directed by the fictional Art Hokum. As time went on, and stories stretched out to a month or more, he introduced various “stars”, who played a variety of roles but were generally typecast in certain positions. The first was leading man Dick Dare — handsome, steel-eyed, and always ready for adventure or romance. Then there was Hazel Dearie, who played opposite Dick as leading lady; Ralph McSneer, who usually played a villain; Blanche Rouge, a vamp in the style of Theda Bara; Herbert Honey, a child star; and even animals such as Dynamo the Wonder Dog and Milo, a monkey. Wheelan maintained the movie theme so well, according to early comics historian Martin Sheridan, children would often write in to ask for the stars’ autographs.

A page from another story in this issue: 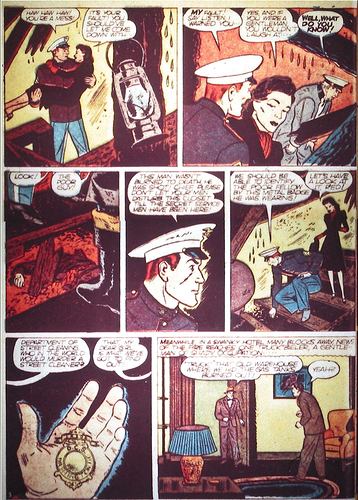 These are Ed Wheelan’s pages: 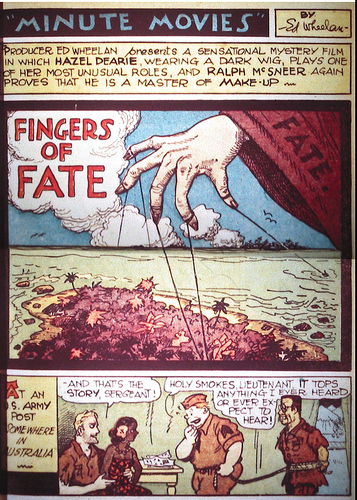 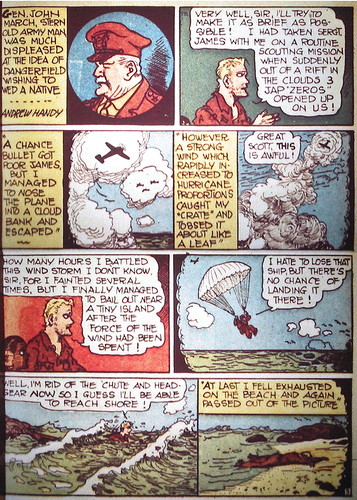 This page shows how the characters were “played” by “actors” 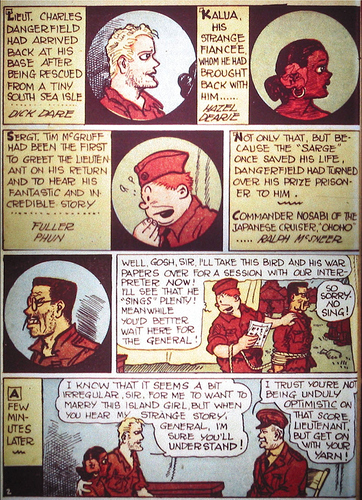 The Fuller Phun “actor” from the above page appeared previously in the issue in the story right before this one: 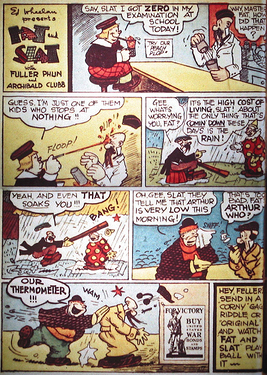 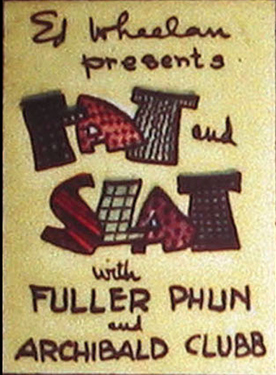 Wow, props on the research done for it! I just tried looking for “Fingers of Fate” on Google.

Red, White and Blue why that sounds like a combat comic that is being covered as we speak in the July History Club! The bad news, this is the best Red, White and Blue story I’ve read. Boy Commandos, Hop Harrigan and the “true” stories are all much better.

I kinda liked this Wonder Woman story making fun of my very distant cousins (I’m 80% German, but we came here in 1850-1870). The whole thing with the kid loosing the dime and that representing a meal is a nice nod to what it meant to be poor at a time like that. Literally, a dime could be the difference between eating and not. Of course, Wondy couldn’t let that stuff stand.

There is only the one Wonder Woman story? The art almost hurts my eyes.

The issue is 92 pages long, so it was probably a good idea to assign only one issue (even if only one story in the collection features Wondy).

Oh, did anyone think that Wildcat looked huge in his story? He’s like the Tick!

So the rest of the main hero stories were interesting.

First, we have Green Lantern, who shows he’s not just a superhero, but also the ultimate wingman, trying to get a date for his obligatory sidekick who’s name I don’t remember.

Then you have Wildcat, who is tasked by his romantic interest(?) to invest her money into something (why she can’t do that herself, well…it’s the 40s), so he decides to bet on himself in a crooked gambling ring. That’s…an odd choice for a crime fighter.

Then we get The Flash, and the whole hook of the crime boss giving himself up as a birthday present for the DA was kind of clever, I have to give it some credit.

I did not dig the Wildcat art. Kinda Dick Tracyish and not in a good way.