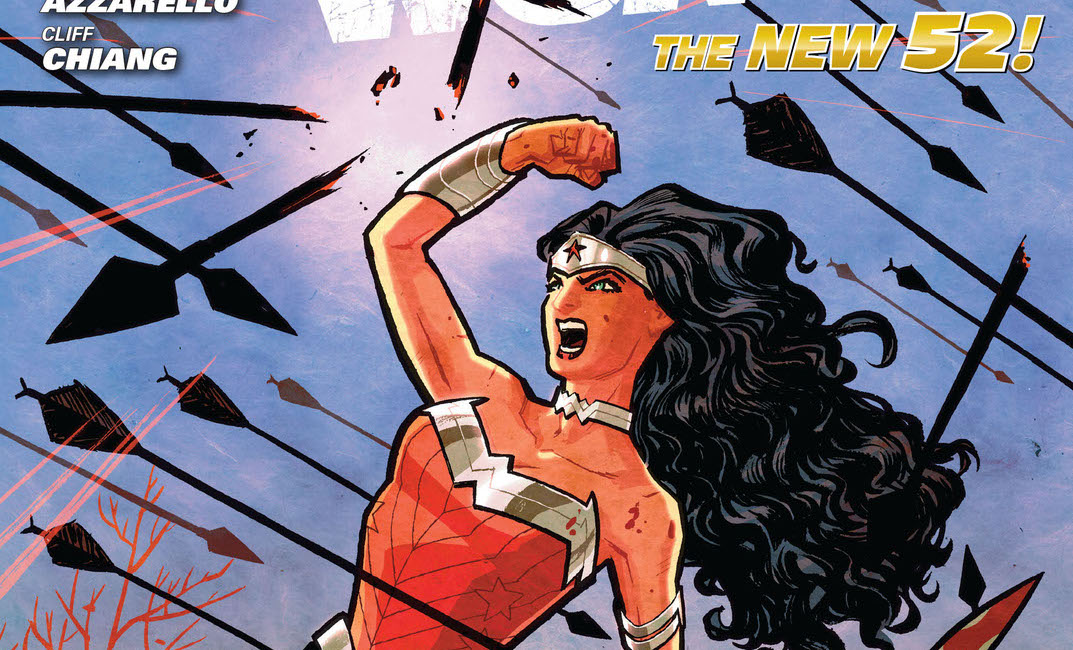 Come read some New 52 Wonder Woman with me, @Nu52, and the World of Wonder. Join us as we explore a different take on the Amazon Princess by Brian Azzarello and Cliff Chiang.

I was just considering rereading this! Excellent choice, @nu52

Im here for it.

I found this story rather disappointing. Perhaps it was because of the hype it has received. Perhaps it’s just that I don’t like the changes it made to the canon.

I like most of the covers. I love how Diana is drawn. However, I don’t like the modernized version of Ares, Eris, or Hermès.

Diana isn’t too developed in this story line. Besides the fact that she finds out her origin story is a lie.

Zola isn’t too developed yet. I think it’s hilarious that Zeus was a truck driver or even some guy at the pool hall. Woah.
She is repeatedly victimized in the series, becoming a vessel for a God’s child, attacked by the scorned wife, taken hostage, etc. Later we get insight to her family troubles and Diana can relate on some issues.

Diana crashing through the jungle of Paradise island, punching bullies and setting the funeral pyre ablaze. Eris has brought strife to paradise.

Possibly both. I tend to react that way to sensationalism too. It’s why I try to read/watch things before people can ruin it w/ too much hype; but I always try to keep an open mind w/ canon. Doesn’t always work, but when it does:

Yeah, reading through these issues again, I’m still feeling a little disappointed in them. I think part of the problem is that I don’t know this Wonder Woman. Things are so drastically different than the pre-New 52 version of her world that I’m not quite sure what her status quo is, so I have no grounds for identifying with Diana. The twist to her origin would have carried more weight before Flashpoint.

I’m not quite sure what her status quo is, so I have no grounds for identifying with Diana.

@AlexanderKnox It’s funny you say that, because I had to fight that exact feeling, but opted to just let the chips fall where they may! It’s also part of why I was thinking about reading it again. I’ve certainly changed, so it stands to reason my perception might’ve changed. Wondering if I’d still find virtue in how drastic a step it was (and the aspects of “new Diana” I could empathize with) or if I was just being FAR too optimistic and trusting—no bueno! lol Who knows? I might even like it more!

(stay tuned)
One thing that hasn’t changed is that I still love the artwork. How do you feel about the art? Do you think it may have added to your dissatisfaction at all? Artwork matters.

Ps. @nu52: the handle + the WW avatar= Inquiring minds want to know your thoughts on this run.

How do you feel about the art?

The art is generally fine, but I dislike the new designs for the pantheon.

read 2 of 3. a(nother) blond Hippolyta. I did recognize the sun of a king as Apollo. which was confirmed when Hermes was named. I should have realized the peacock theme would be Hera. I liked her throne clothes; perhaps a pretend crush in the making? I think i am still on the fence with Diana as an offspring of Zeus. i gather this is the iteration where there was the later reveal of Diana having a brother, but has yet to be written (like the three (3) Jokers thing).

Actually, the thing with her brother was addressed during James Robinson run on the book.

i have to think of a way to describe books that are in the same published volume regardless of author, but with less words.

but I dislike the new designs for the pantheon

I get you, but i can go either way on this. Other than the usual humans in togas, the reinterpretation can make it interesting.

Overall, I enjoy this admittedly different and dare I use the word “grittier” take on Diana. This leans way more toward the warrior than the peace side of the character but she’s still recognizable to me.
I definitely love the art. Diana just looks physically powerful and bigger than she’s normally presented. 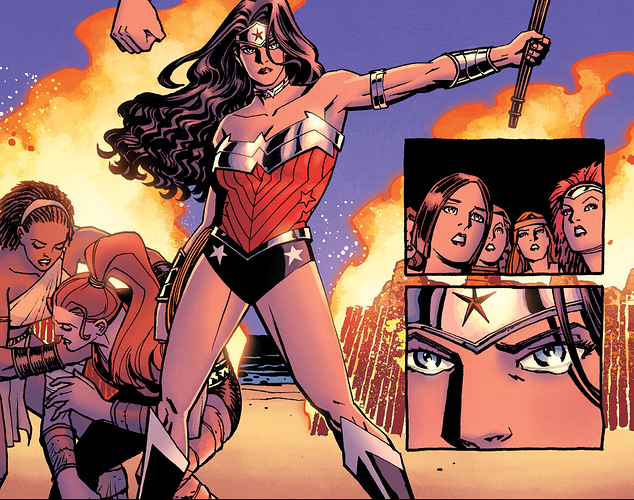 image1505×1186 1.99 MB
I also appreciate that the dialogue is less artificial than we sometimes see in Wonder Woman. 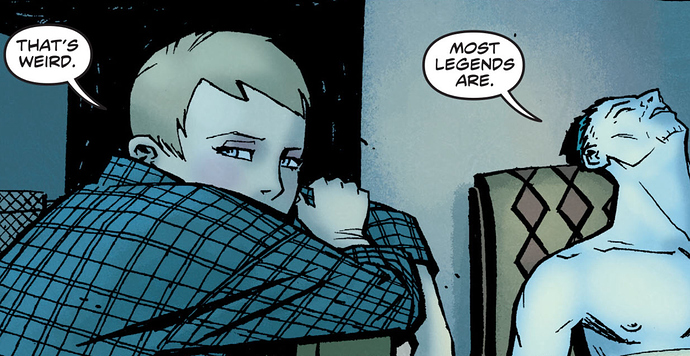 As for the Pantheon. I might critique a particular look, but I love the idea that we’re not seeing everyone looking like they came off a Greek statue. I would expect how they present themselves would change overtime. I do wonder about some of the looks, are they based on anything from Greek mythology. Hermes for example. I also wonder about the use of the peacock feather cloak. Does that have a meaning beyond looking cool? 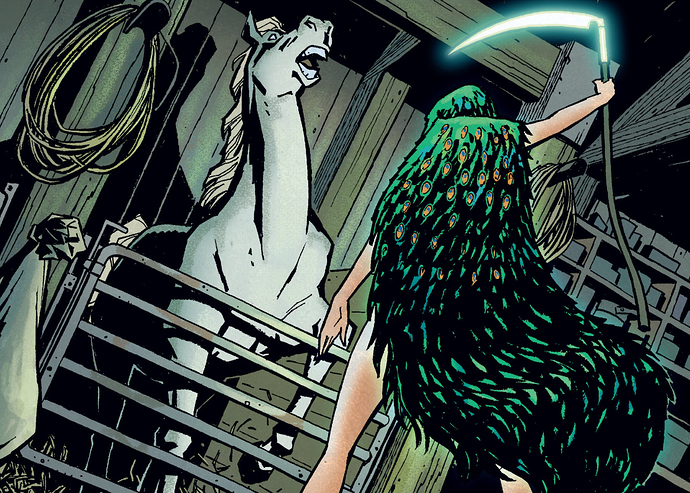 I also wonder about the use of the peacock feather cloak. Does that have a meaning beyond looking cool?

I know this one. In Art History, Hera’s sacred animal was a peacock which represented pride, beauty, and vengeful nature.
Her chariot is often depicted as pulled by peacocks. She is sometimes adorn with peacock feathers or shown holding one.

The relationships of Greek Gods is fascinating.
Hera was a protector of marriage, which is why Zeus’s infidelities are a huge focus.

answered and it makes sense

Nice when it works out, eh?

On the Pantheon, I have to say I’m the exact opposite, where not only do I love this take on the Pantheon, I think it’s the best, most interesting take on them from any iteration of the character. In terms of look they are fascinating and fashionable in ways that fit the characters and feel timeless and yet modern, and in character they’re brilliantly portrayed as flawed and complex beings with interesting struggles. In some ways it feels like a crime family drama (fitting considering Azzarello made his name in crime comics like 100 Bullets) with Wonder Woman as the lead.

I really enjoy this run, in case you can’t tell.

Great news! (For me, anyway.)
I still enjoy everything about this run!

The dialogue flows naturally and the Art is some of the best of any WW series I’ve read. It just feels like it let Diana (and all her glorious complex femininity) step into this century, finally. There’s a new energy and charisma to her that makes me a little more engaged. She’s different, yes, but feels more intrepid and modern than she ever has and I love it. And the Pantheon—everyone gets to be so much more relatable than previous iterations. They have the kind of charming dysfunctional family vibe I just can’t resist! Gold star

I really enjoy this run, in case you can’t tell.

Same.
I felt like I was gushing too much, but then I thought: I don’t care! It deserves the praise!

How are you enjoying Cliff Chiang’s art?

I love his art – it’s a unique vibe, cartoony in some ways. Best way I can describe it is that in some ways it feels evocative of something like Borderlands, real world stuff with a sort of thick, cel-shading layer over it. It allows the characters to be expressive, but without sacrificing the dark tone and feel.

How are you enjoying Brian Azzarello’s Diana and her world?

Liking Azzarello’s Diana so far. I like how she’s got the warrior stuff down, but still has those diplomatic, intuitive, and at times mischievous sides to her as well.

The world so far is good – like I said, I love his take on the Pantheon, definitely my favorite version of them in any Wonder Woman story. The Amazons are okay. I love the design of their island, and the way they go into a bit of her childhood was interesting. Their initial taunts about cutting…things off Hermes was probably a bit more extreme than what we’d normally expect from them, but in comparison to some of the other stuff that happens in this run, it’s kinda tame.

What are your opinions on Zola?

This is definitely a good intro for Zola. I like how she works as the sort of Companion role, someone who Diana or Hermes or anyone else can give her the exposition that someone coming in fresh might need. But even still, she’s got a great personality, someone who feels radically different than Diana, but still has some strength of her own. And she has some good laughs, like when she goes a little far with the squishing bugs metaphor.

Character wise, I think I will go with Diana and Hippolyta talking after the revelation, just beautifully done drama.

Art wise, I might go with issue one where Diana is deflecting the arrows aimed at Zola with her bracelets.