Hello DC Universe.
My name is Pumpkin_Trickster and I’ve been a Batman fan for 4 years now, although I liked the Riddler since Batman Forever.

Background Info on ‘Willy Wonka’ Rumor:
I wasn’t sure where to post this question, but I was so intrigued by this rumor I heard that I had to ask the source- so I hope official DC Team responds on its authenticity or not, since DC has had competitions to get fans involved from time to time, I was hoping this rumor was true because it’d give meaning to the Batman world.

My source I talked to said this competition will make Marvels 10 years’ worth of planning look like nothing, when DC releases a 80 years of planning into this secret competition for fans.
They described it as a ‘Willy Wonka’ competition, even that it’s official name is: “The BMFC Competition”, or, ‘Batman Mysteries Fan Competition ’. The competition was said start unofficially, but officially to fans in the 1960’s.

So far, no one has submitted a work or guess that ties everything together. (well that’s obvious! :P)

The person I talked to said it’s why DC Universe was made in the first place. This website conveniently has the ENTIRE batman history. It’ll be a reliable source for fans to reference from, as well as hopefully encourage people to read, watch and go over everything to win the ultimate fan prize, although this site isn’t the only source of credible info since also some crucial clues are hidden in many Batman Merchandise may, or may not be clues to the underlying story.

So to get to the ‘Willy Wonka’ rumor:

WILLY WONKA RUMOR, or the unofficial ‘BMFC’: Detective Comics BATMAN Series has a ‘story within a story’ competition.
My source says the writers and directive teams over the years have built up an entire story line that appears to be a convoluted and mixed up like DC doesn’t know what they are doing- especially with the timeline- when in fact the ENTIRE batman franchise comes together to tell a story within a story.

Is it true that there are stories within stories that spell out a greater mystery in Gotham? That this secret competition is known and still open only to the most dedicated fans, most open minded detectives/investigators and/or lucky people to come across the crucial information?

My source says that this BMFC unofficially, but officially started giving clues in 1960 comics and TV series, that in retrospect, will draw a connection to a much larger plot in the Batman Franchise. Is it true that this idea was never officially announced since it’s called, ‘Detective Comics’, and DC wanted fans to find it themselves? That they implied mysteries by asking fans, ‘what do YOU think this story–?’ and that’s why DC is carrying on the Joker series for so long, since he’s one of the mysteries in this competition?

Also, is it true that if no one can provide an answer to the mysteries and deeper story line by 2030, then DC will publicly announce the competition to the world where it’ll be anyone’s’ game, only withdrawing the passing of the Mantle of the Bat? Then DC will start releasing clues one by one until someone gets it, or reveal the plot by 2040 and no one gets a prize?

WHO CAN SOLVE THE MYSTERY: Supposedly fans are able to work in teams, solo, or solve it by proxy if they are underage. Creative directors, or leads in DC, or who have written the guidelines on the series are exempt, such as ‘Paul Dini’, ‘Scott Snyder’, ‘Alan Moore’, etc. since they wrote the official material so far, although they might’ve not been aware they were contributing to the larger story.

Apparently you don’t need to buy anything, but going through the movies, games and comics will be beneficial to your understanding of the story:

SUBMITTING THEIR FINDINGS: My source says that DC recognizes that fans come in different ages, have different medium preference, and have different ways of deducing information. People can site fan work, sources since a fan might’ve accidently been onto something, but didn’t explore other possibilities.

So DC unofficial rules state that competitors will have to submit their findings with the DC Board.
After that, DC will submit the persons finding to the fan base to see if their conclusions of what they think the timeline is become cannon, since fans will have to be creative enough to present what they think is the entire story line.

PRIZES: To my understanding, are the prizes these?

FAN PRIZE ONLY: The Mantle of the Bat

(The rights they DC still has access to, however the owning of the rights will come with an royalty promise to the current owner of DC comics for being inconvenienced of the rights they once held. What if the person who solves the mystery is a villain and doesn’t want to keep DC Comics alive?? They’ll be protection and failsafe’s for job securities.)

Whomever the mantle is passed on to, they’ll be able to do what they want to the franchise as they please, and can recreate the story as they wish, they can keep it how it is and have their name plastered as executive owner if they want or whatnot; they can sell it; keep it to themselves and deny the world any more official BATMAN creations without their permission or whatnot.

PRIZE OPTION TWO: Alternate prizes if the winner doesn’t want the mantle, and prizes for 2030: If you don’t want the mantle of the bat, or were solving it for the recognition as THIS world’s greatest detective, or simply not a writer, just a fan….
2) A chance to be a directive creator to the franchise
3) Own royalties to the Batman franchise
4) Become a character with a money award and collectibles of the time.

SKILLS NEEDED: Conclusions can be formed with following the main story line, but to get the entire understanding, fans will have a greater understanding of the ‘true story’ if they read, watch and see EVERYTHING. That means reading DC comics altogether may give you hidden range of crucial clues to prove your theory- just like a detective!

My source says the only hints fans will get is:
“The story of Gotham starts way before nineteen-thirty; Back way before the Island got dirty.”
“Miagani Island is the home of the true villain and Hero of the story- and they are NOT Joker(s) or Bruce Wayne so don’t worry.”
“ACE Chemicals is where you’ll find joker(s) true motive hidden in plain sight-- It’ll help reveal why he is all white.”
“Follow the detective and the harlequin because they are always sightseeing… whom they interact with could be just as important being. ”

So… any of this true?

What do fans think? Too good to be true, or just a funny joke because DC couldn’t think up something like this?

All I can tell you is that the Oompa-Loompas are 5th dimensional imps.

HubCityQuestions, you are funny. I can appreciate a good sense of humor.
Okay my title is a little silly, I was attempting to connect it a competition where someone becomes the owner of the factory, but I guess it didn’t fly, much to my embarrassment.
but that doesn’t mean there couldn’t be a real mystery with a amazing prize!

but really, there lots of unsolved mysteries in the DC world, like the ones I can think up of are:
What are the mother boxes?

It’s fun to have lore into the top 5 top families in Gotham, whicih all have a intriguing history and they all connect with each other. (Wayne, Kane, Elliot, Crowns- they split to two families the Court of owls and the Cobblepots and have a ‘Grayson’ together, Dumas)

Why mentioned a multiverse and map it out? (I know they say it’s a attempt to clear up the discontinuity of the DC world- or is it something more than a map?)

Why introduce 3 jokers? I think it’d be fun to profile him and them for sure. Because Joker loves misdirecting people, what if he knew about the Mobius Chair and wanted his identity to be a secret and thrawted everyone’s suspicion again?

Why is Telltales Joker seem like tw, ''o different fellas? (could be written off as just different writers, I know but still–!.)

Why was the very 1st batman story, ‘Case of the Chemical Sydndicate’ line redone for a more modern touch that indicated that the fella named ’ Alfred Stryker*’ was Joker? What is his connection to Apex chemicals? Was it because he needed a place to make his joker stuff, was he testing other things to get his skin to look normal?

It’s also interesting that there is a magic system in the universe. Powers of these forces are represented in colors, that’s interesting but hardly ever mentioned except for the Green lantern corp. Who are the champions, like Poison Ivy is to the green? Solomon Grundy is the champion of the Grey. Abigail Arcane champion of the Black. 0Ao I hope I don’t sound crazy, you can look it up. I just wonder if these forces ever mean anything more to the stories? Would they ever be explored more?

I don’t know, maybe just me and I’m a silly goose for believing there is something more to Batman series story line, however it’d be fun if there was a connection through each era, and that there was a more meaningful story than Batman beating up poor people who had to turn to crime. Well, thanks for hearing me out. If you’d like to discuss theories and whatnot, that’d be fun. thank you. 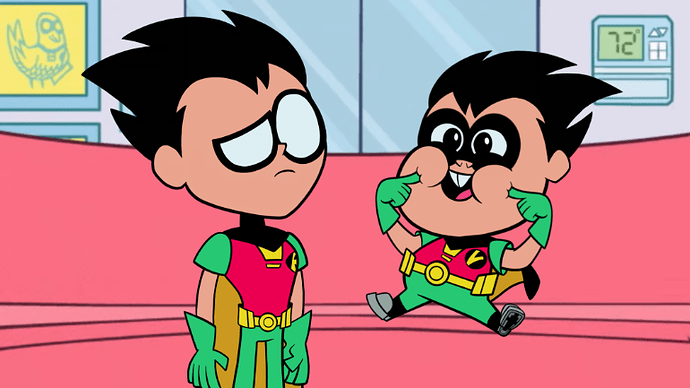 Lol, you tell me- red herring or a clue?
I don’t think I’ve watched this series. I got to add that to my list. Which series is this?