Who Would Win? General Immortus vs. The General

Our fight this week is between two of the most villainous generals in the Multiverse-General Immortus and the General!

General Immortus is an immortal genius, with expert knowledge of military strategy, technology and the occult. He’s a frequent enemy of the Doom Patrol (and is featured in the current season of the TV series).

Ulysses Hadrian Armstrong, known more commonly as the General, is also a military genius, as well as a skilled fighter and explosives expert. He’s been a Gotham crime lord and recurring enemy of Tim Drake.

If these two Generals were to square off in the field of battle, which one do you think would be the victor? Let us know below! 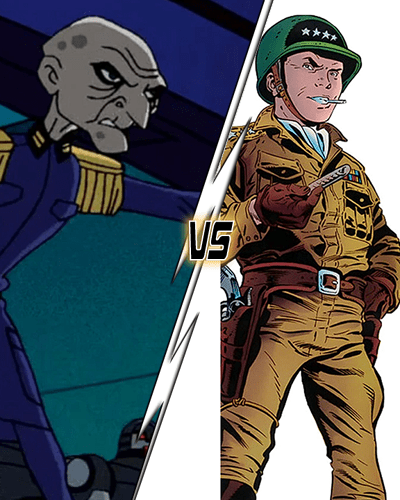 I went with Immortus. He’s lived for centuries and hence has centuries of military experience at his command, not to mention advanced technology and powerful allies like the Brotherhood of Evil.

I would’ve pick General Eisenhower, Because I like Ike!

Hope you got my joke, if not, it was one of campaigned slogan when General Eisenhower ran for President, they would say, I like Ike.

In all seriousness I pick The General, cause he look smarter and can find a way to win a war.

Hey @Green.Lantern here’s a song about the General from White Christmas.

Thanks for sharing! I wasn’t expecting Bing Crosby to come up in this topic, but it fits.

Put the little General in a time out. There, done.

Have to go with Immortus as the ultimate Victor of the War, though the General might win some battles.

However, that General is not part of this poll, so…I’ll go with General Immortus.

The real question is, how would both of them fare against this General?

i’m going with the immortal genius