Who Would Win? Firestorm vs. Larfleeze

Our fight this is week is between two of the most powerful (and most colorful) characters in the DC universe-Firestorm and Larfleeze! Who do you think would win in a fight between the Nuclear Man and the avaricious leader of the Orange Lanterns? Let us know who and why, below! 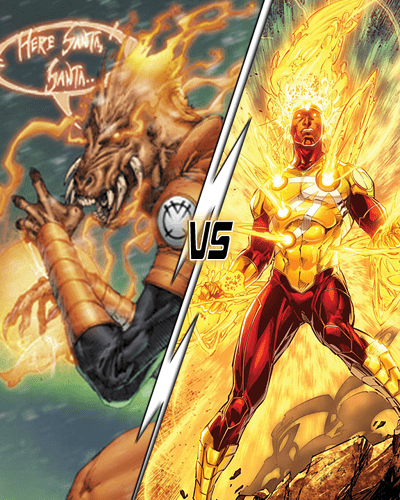 I don’t want to get too greedy, Knowing who may get the most vote I went with Larfleeze! He’s mine so he gets my vote, then again, I want my vote back!

I honestly expected Firestorm to get more votes, but I do think Larfleeze would win.

Doesn’t larfleeze have every orange lantern he’s slayed at his fingertips. It turns into an army vs firestorm.

Larfleeze blows his hair out.

I didn’t even think of that! Another reason Larfleeze would win!

I think lanterns are pretty good against nuclear fire so Larf.

But FS could just transmutate some gold and trap him.

Larfleeze is a lot of fun, but was his first action figure made by Kenner?

Nope, but Firestorm’s was, so he wins.

Also, Firestorm is badass. He just IS.

Larfleeze’s greed is both a strength and a weakness. There are any number of ways he could be distracted and brought down by someone who can transmute…

Besides, as I’ve stated elsewhere, Firestorm’s been one of my guys since I bought his first issue as a kid…