Who Would Win? Crush vs. Jon Kent

Our matchup this week is between the children of two of the DC Universe’s strongest and most famous characters-Crush vs. Jon Kent! The former Teen Titan or the current Superman-who do you think would win and why? Let us know your pick, below! 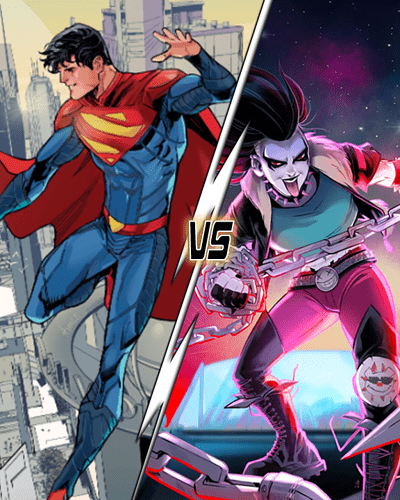 Jon’s my dude, so he gets the win.

Crush is rad, but I don’t think she’d want to fight Jon.

Sure, her dad would tell her how Jon’s dad is a “fraggin’ bastich” and what have you, but Superman and Lobo have a very, very begrudging acceptance of each other, so I imagine Crush would foster the same with Jon.

After she repeatedly attempts to knock Jon’s teeth out the back of his skull, of course. Its the 'Bo way, Clyde!

This did seem like one of those fights where neither one of them would really be that into it. But thankfully there’s a long tradition of superhero misunderstanding fights, so there’s always a possibility!

They’d wale on each other for a good long while, and then stop, with one saying “Why don’t we go kick Henry Bendix around, instead?”, to which the other replies “Cool, let’s frag 'em!”

I’ll let you decide who said what in that exchange.

Tough call both are human hybrids,with powers from their alien fathers, potentially greater than theirs. Currently I am going with Jon as he seems to have explored his current powers a bit more, however who knows what the future shall hold.

Jon would win. Too much training from too many skilled Kryptonians.

I voted for Jon because sure, Crush is immortal, but surviving a fight doesn’t mean winning it. Also in the worst case scenario Jon could go back in time and stop her from being born.

That’s a good question – Jon has the power, but Crush has the drive and more willing to fight dirty.

I will say that, unlike their fathers, I think these two are more likely to end up as friends regardless of who wins.

I will say that, unlike their fathers, I think these two are more likely to end up as friends regardless of who wins.

I am going with Jon. I mean, he’s Superman, after all.

In a real fight Crush wins, but Jon wins because he is a hero and Crush, like Daddy is probably a wanted fugitive for bad clothing choice.