Who Would Win: Batman vs. Snake Eyes

They’re both master fighters, whether they’re armed or unarmed. They also have brilliant tactical minds and have mentored many others who’ve gone on to be great heroes and fighters.

Before they face off next week, let us know #who-would-win - and why - below! 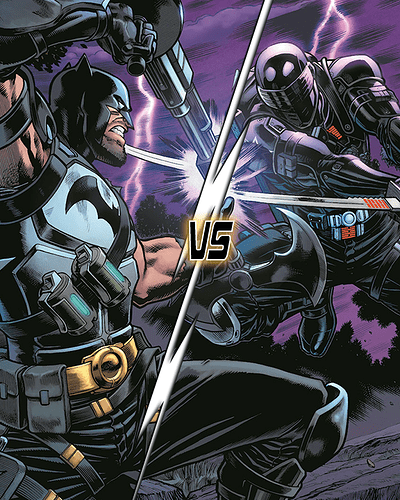 I would win. I have better weapons, more impressive feats of strength, superior durability (I remember Snake Eyes being surprisingly fragile in Sigma 6), and I am smarter.

Snake-eye would definitely win. He has a gun and can easily take Batman out with a headshot or kill him with his sword! He’s a member of G.I.Joes who doesn’t quit!

I dodge bullets all the time. I dodge machine gun fire with ease somehow.

Bats. Snake yes is good but ultimately he someone as skilled as bats that kills. Bat has beaten people like that many times.

Batman is a man who basically became a super soldier the long hard way, and his physical conditioning is beyond that of most Olympic athletes. Batman can move fast enough to fight a speed force user for one minute and even stabbed Reverse flash in the footwell he was vibrating to be intangible. Broke the joker’s neck with one punch (in the Nail elseworld). He fought his way out of Arkham after being tortured using fear toxin for two weeks. Had his back broken twice and came back from it, survived having his throat slit twice, and his normal workout consists of benching 1000 lbs without a bench shirt (the record is about 750lbs without a shirt).

Snake Eyes is a normal human that is a ninja and a commando…deathstroke is a ninja, commando, and super-soldier, and has two inches on batman and batman still kicked his butt. And this batman knows he has to kill to get out of the 22 minute time trap he is in so he can see his kitty cat again. Snake eyes does not stand a chance as batman won’t be holding back and has an ax.
Also, as I could not find his official height, I looked up his movie actor, so at least in the live-action films, Snake eyes is 5 foot 9 inches tall, batman is 6 foot 2 inches, so he has five inches on snake eyes. also snake eyes has only been around since 1982 Batman has 43 years more fighting experience then Snake Eyes.

Ah, yes… The battle that I was thinking about from selecting this week’s Mixtape Monday choices.

Seems to me it could just be a roll of the dice as to who would win.

So Kelex, buddy, old pal… You know what to do.

No snake eyes, so Batman is declared the winner.

@MatthewHecht You make a good case, and I assume you would know what you’re talking about.

@Reaganfan78 I like your enthusiasm, although the thought of someone taking about Batman “easily” is hard to imagine.
@NYJt3 It does seem like Batman would have more experience fighting people like Snake Eyes, but I don’t think Snake Eyes would really know what he was getting into.
@Nobody.bladesmith I like how much detail you’ve gone into here. You sure have done your research, which reminds me of Batman!
@ajm08g I’m not surprised that Kelex would choose Batman.

I’m 100% positive people are unfamiliar with how awesome he is. A poll on a DC forum having Batman win isn’t surprising. Also, people want to talk about Batman defeating characters but don’t want to talk about all the times he has been captured or “beaten” by lesser characters apparently.

Batman of course. Because DC always gives him god-tier plot armor and ability to pull out wacky things out of nowhere to win. 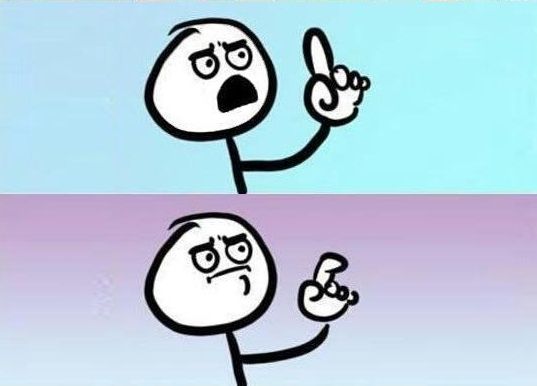 Batman is getting too old … he would get beaten for sure. Besides, Snake Eyes is from G.I. Joe!