Who Would Win? Aquaman vs. The Flash

This week sees the release of Aquaman & the Flash: Voidsong, which features one of the few team-ups of the two title heroes. They fight each other even less than they team up, but this week, we’re pitting them against each other! Let us know who you think would win between the Scarlet Speedster and the King of the Seven Seas and why, below! 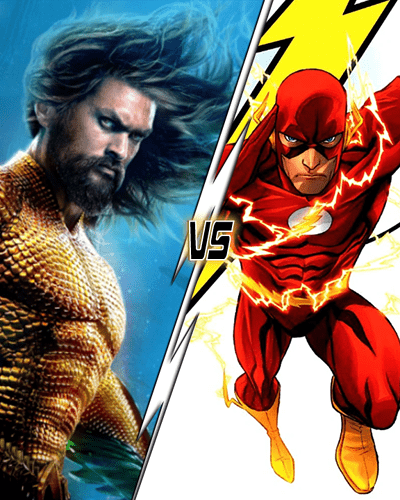 I don’t know why but I just think Aquaman would win.

Gotta go with The Flash on this one!

I have to go with The Flash. I mean, superspeed is kind of hard to beat.

Aquaman wins cause Flash can’t touch him underwater and Arthur brain slams Barry to slow him down for a punch on land.

I feel like it depends on where the battle takes place. Flash would probably be too fast to stop on land, but Aquaman would easily win if the fight took place underwater

Arthur brain slams Barry to slow him down for a punch on land.

But Barry’s not a fish, so would that even work on him?

The Flash nowadays is as overpowered as Superman was pre Byrne days, so it wouldn’t even be a contest.

For me, this is a tough one. Not only is it highly dependent on the terrain and situation, but also these are two characters who have known and fought alongside each other for a very long time (various Crises and reboots notwithstanding).

I have to give it to the Flash, albeit reluctantly.

But Barry’s not a fish, so would that even work on him?

According to justice league Detroit. Aquaman can use his telepathy on humans, but he isn’t very subtle with it, so think sledgehammer instead of scalpel

I pick Aquaman, all Flash ever done is run, what kind of a hero is that? It’s Outrageous!

I’ll admit I didn’t know that, but what about Barry’s speed? I feel like that’d at least interfere w/ Arthur’s telepathy, if not outright block it

I, Feel the Flash Would Win!
He’s, Way More Popular!
Good Match Up!

The Flash is Fast and Smart!
I, Think the Flash Would Figure Out A Way Too Defeat Aquaman!
The Flash Vs. Aquaman!

The Flash Can Run On Water!
The Flash Would Run Circles Around Aquaman!

I voted Aquaman for no other reason than I’m tired of Barry, he’s overpowered, and Wally is my Flash.

Holy moley !
This was a very hard one for me. I love them both.

The Flash. He’d vibrate his hands into and through Art’s chest while on the Watchtower, then go play Rock 'Em Sock 'Em Robots with J’onn, afterward.

Flash wins even if under water. Legs are needed to swim. The real issue is a lack of content for aqua heroes. Aside from Aquaman and Black Manta, and Killer Croc and King Shark, how many other characters are there?

In terms of how Flash would create too many currents at varied speeds that Aquaman would have a hard time breathing.

I shall vote Aquaman under the reasoning that hes done some pretty random stuff over the years, and Flash’s abilities can get interfered with by the wildest things sometimes

Or a random patch of ice, or some marbles on the ground, or getting his feet stuck to molten concrete and so on and so forth, yeah. XD

More importantly though, writers sometimes establish the Flash as being vulnerable to magic in weird ways sometimes. (Such as someone with magic based speed being able to outrun him) and Aquamans had some weird abilities in relation to magic back in the 90s as I recall