Who’s the Next Harley Writer?

Today, our own Sam Humphries announced that the upcoming issue #75 of Harley Quinn will be the last of his run. 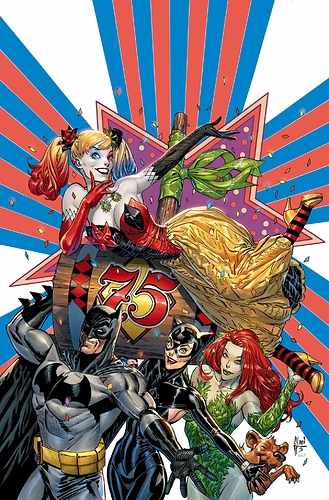 Hey y'all, I'm hammer-smashing the embargo to break the news that HARLEY QUINN is OVER with issue 75! FINAL ISSUE! No worries and no tears, this has been the plan for almost a year, and we're celebrating with one Harley's biggest issues OF ALL TIME! (cover by @GuillemMarch) 🖤♦️

What’s next for Harley? This is what he had to say:

“Harley is moving on to one of my favorite creators AND people (no hints). Perfect occasion for a new number one. And I’m absolutely thrilled about where Harley is headed.”

So: with that in mind, who do YOU think is the next writer of Harley Quinn?

(Personally, I’m hoping for one of the show writers…)

I’d be down with Stjepan Sejic writing an ongoing after Harleen.

I feel like that would be a little too heavy. I think Harley should be a funny book.

Maybe it’s because I’m not really a fan of the Harley-as-Deadpool trend as of late, but I actually think a heavier (resisting urge to quote Back to the Future) HQ book might be a good shake up. Obviously not as dark as the Black Label take, but maybe something a little more along the lines of those late ‘90s Paul Dini stories. My point with Sejic writing it is that I feel like he has a grasp on the character that’s been missing since the start of The New 52. I don’t need something as thematically intense as Harleen, just a reinvigoration of the Animated Series personality. Honestly, I’d love a supervillain romance comic between her and Poison Ivy.

I hope it’s something different stylistically than what we have seen before. I think that one of the things Dini & Timm did with HQ is create a character that is flexible much in the same vein as Superman, Batman, Wonder Woman. You can place her any where, any when, and she can still be true to her HQ core. Not every character is like that. Most aren’t. Harley is.

Throwing her back in time to be a jester in the court of King Arthur. That I’d love to see. Fight face to face or side by side any knight in the court, get in Merlin’s grill. Foil the plots of Morgan Le Fay by taunting her into a mistake.

I don’t mind a lot of humor, I’d just like it if Harley got a run that was a little more mature in tone—less silly and impulsive and more brooding and deliberate. Meaning: She’s intelligent & audacious—let’s lean in to that a bit more. I’d also really like to see bolder artistic visuals for her. It’s Harley!

Go big or go home w/ the artwork!
I agree, @Batwing52. Maybe not quite the same as the Harleen/Black Label, but something a touch less frivolous than her runs lately. It would be a nice change of pace.

Wow it’s ending (for now) still haven’t got to it yet on my rebirth binge but nice to see it getting a nice big send off.

As for who’s writing next I have know idea but they’ll probably do a great job.

Jimmy Olsen is ending next month. So maybe Matt Fraction next.

Ooh! This is a good guess! And if true, picking up that book immediately.

I would totally read a Fraction-written Harley Quinn run.

I think he could do well on it, although I kind of have the same worry for both creator and property; they both have a tendency to get a little too far out there, if you know what I mean.

Given Booster Gold’s recent involvement, I’d be game for Dan Jurgens taking on the new book.

I’ll read the new series in single issues if Paul Dini is on deck. He has an ample history of writing main continuity ongoings that guest starred and starred Harls, so why not?

I’d love to see Palmiotti & Conner writing that series again. It probably won’t be them but if not, I’m all for the Matt Fraction suggestion by @50710 above.

I just hope the next writer brings it into the actual shared universe and not this weird Harley world.

I mean for that to work she’d have to spend all her time in Belle Reve.

I love Dini’s work, but I feel other writers should have a chance to get to build Harley’s world. It’s such a shame that Humphries’ run is ending because he really understood her character in a way other writers haven’t.

I’m seconding the suggestion that DC hire Zdarsky. I’d love to see what he’d do with the DC Universe, and I trust him as a writer.

Mark Russell would be my pick.

But seeing Fraction mentioned above I would support that as well.

Mark Russell HAS filled in before… it’s a good choice.