Who do you want to be GL

I personally would like Taylor Kitsch
To play Hal Jordan. Ricky Whittle as John Stewart.

I think that Star Trek guy could play Hal.

John Kransinki absolutely needs to be Hal. Especially, after his performance on Jack Ryan.

I haven’t watched the Office in a long time but I like Kransinski better as an action guy more than a comedy one. A lot of people forget about 13 Hours and how good he was in that movie. Also, if we had a time machine I’d pick a young Denzel for John Stewart. But now I would pick Mahershala Ali for Stewart.

Ive seen a few casting wishlists online for GL and some of them are really good imo.

James Marsden, Ted from Westworld, would be a great Hal. Ive seen a few people say that and honestly I agree with it. I think Armie Hammer or Josh Duhamel would be good choices too.

Idris Elba or Sterlin Brown for John Stewart. Both guys would kill it as John IMO. I dont think John should be as young as Hal.

Riz Ahmed as Simon Baz. Riz was the pilot in Rogue One and he was a villain in Venom.

Funny enough I feel like Chris Pratt would be a really good Guy Gardner. Its super unlikely since he is Star Lord.

Joel Edgerton would be a good Guy too.

@InMagno Mahershala Ali was so good in true detective. He would be a great John Stewart.

You know who would make the best Hal? Chris Pine! It still blows my mind how he didn’t get an offer to play him. Having him as Steve was kind of a kick in the balls because I feel like that was a downgrade in his career lol. Put any other actor his that same role and Wonder Woman doesn’t change a bit.

Ali definitely made me a big fan after watching the Green Book. It has become one of my favorite movies of all time!

I wouldn’t mind Pratt at all. That dude can act! But every actor after Endgame probably won’t be in another comic movie again…or at least for awhile.

We don’t necessarily know Pine didn’t get an offer to play Hal. Unless you know his agent.

We would definitely know if he got an offer man. That’s huge news. Even sports fans know about offers for certain athletes.

First post ever, even though I’ve been a member for basically a year!

I’ve met Ricky Whittle twice over the past three years at comic book conventions and I must say he’s truly wonderful to all his fans, and I do mean ALL. I know he’s interested in playing John Stewart and I think he would absolutely crush it! Bosslogic made a great fanart for this too.

In spite of how old Nathan Fillion is now (48), a buddy cop film with Nathan as Hal and Ricky (37) as John would be a hilarious yet satisfying duo pairing. Apparently Ricky and Zachary Levi are friends (they were both at the same convention and joking around with one another), so a Shazam cameo in the Green Lantern Corps movie would be a lot of fun. I can just see the two GLs yelling and freaking out that a kid is meddling in intergalactic affairs.

I also like the previous suggestions of:
Riz Ahmed - Simon
Joel Edgerton - Guy

As for Kyle Rayner:
Joseph Gordon Levitt or Rami Malek

So I’d love to see Ricky offered the role of John Stewart, before Feige and Marvel come calling to book him up! 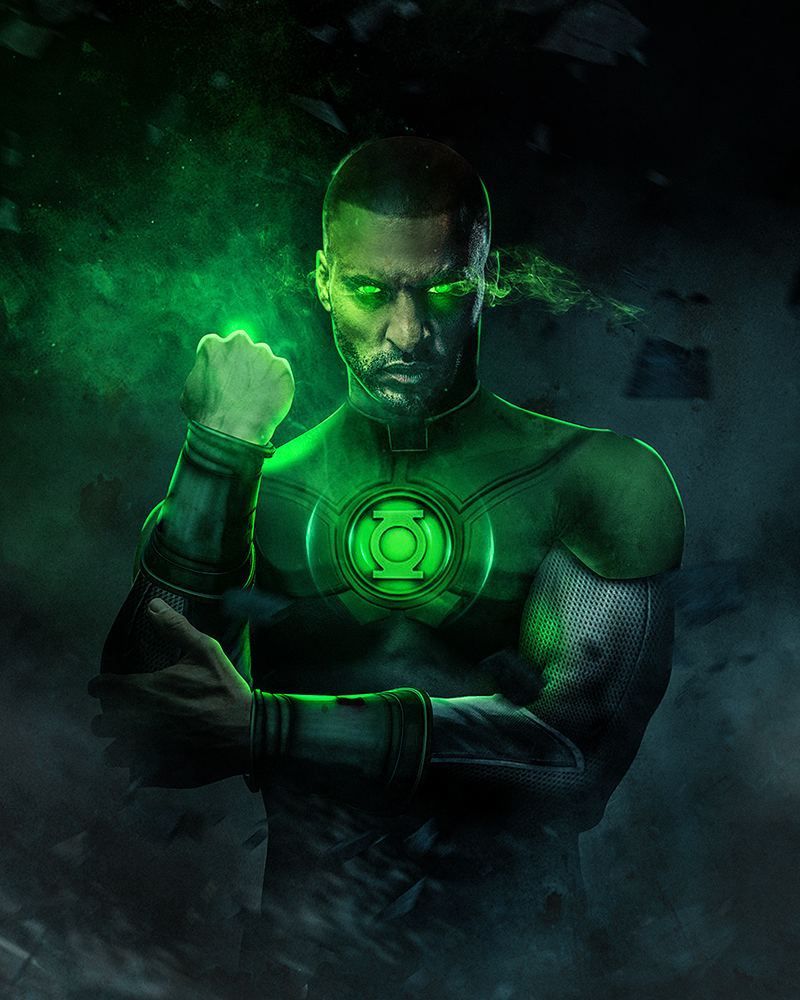 John Stewart with will Smith

Oops smith played dead shot
So Anna Kendrick or felicity jones for a Jessica jones.
holy cow! I can’t believe I left Jessica jones! I’m so mad at myself
I meant Jessica Cruz!