I’m working on a redesigned Batman sketch, and I need your help; I can’t decide on which design is better, so put answers down below, With or without circle? 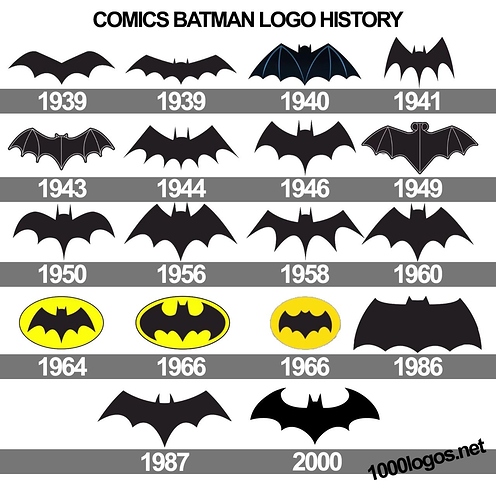 I’m a 1966 yellow-oval hardliner. It makes it pop much better and matches his belt.

yeah, 66 reminds me the most of Batman.

1966 (first one). Ask me which one makes me instantly think of Batman, and that’s the symbol

I prefer an all black fat-bat symbol seen in the Dark Knight Returns, BvS, and in some iterations of the Rebirth suit.

It’s Batman there All Cool

I’m surprised how many people like the fat bat-symbol. I always thought it was kind of ugly. In terms of oval-less symbols, I like the shape of the 2000 one as shown in the image there. I’d probably rank my preferences:
1: 1966 yellow-oval symbol
2: 2016 yellow-outline symbol
3: 2000 symbol with the curved edges
4: 1946 straight-edged symbol (and similar)
5: Batman Beyond high-pointed symbol

I don’t like the giant Miller Bat or the flat-topped Nolan Bat at all. I hate to keep calling the Miller one fat, but… it kinda looks weirdly fat, like you’re looking at it through some kind of fish-eye effect. The Nolan one is just… plain. Even compared to the 1946 one. It feels like it’s trying to be unobtrusive, which is not the most interesting design for a chest logo, “realistic” though it may be.

'66-Bat looks like something that’s designed to let the bad guys know exactly who’s about to ruin their day. And honestly, if you’re looking at the symbol on his chest, the presence or lack of presence of the color yellow in that symbol is not going to affect whether you spot him, so I don’t consider it that much of a stealth issue, especially since he tends to run around in light grey anyway, so it behooves him to keep his cape wrapped around him.

'16-Bat is an interesting compromise design. I would’ve been fine if they’d stuck with it.

'00-Bat at least looks stylish, even if it makes his belt stick out like a sore thumb and doesn’t pop as well as the last two I mentioned.

'46-Bat is the classic, so I can’t totally diss it even if it is one of the more boring designs.

Beyond-Bat is all stylish and angular. It works because it’s distinguishing Terry McGinnis (or Kate Kane, for that matter; I’m pretty sure she uses the same one Terry does) from Bruce while still being recognizable as a bat symbol. I might not like it as much on Bruce himself.

I’m a graphic designer… and just from logo perspective, I think 66 and 00 one works the best (and I like 87 too actually). It has clean lines and symmetry, and works for all different versions of batman. I feel like some might work only for certain batman titles since it’s more whimsical, cuter, etc.

1950 hands down, it pays so much homage to the cape, and the cape is so integral to looking like a bat. (I mean, Batman without a cape? They got away with it in BB but even that had glider wings.

Regardless of logo, to the general population, I think the yellow oval screams “this is Batman”. It actually had a function back in the O’Neil/Adams days. It also has & was designed to have a Worhal pop art vibe. So that could play into the design decision.

Personally i like the eblem Batman currently wears in the comics.

1946 looks the most universal. You could see it in any interpretation I think.