What’s a DC Comics themed toy line you absolutely love?
Mine would be a more recent toy line being DC Primal Age!!! 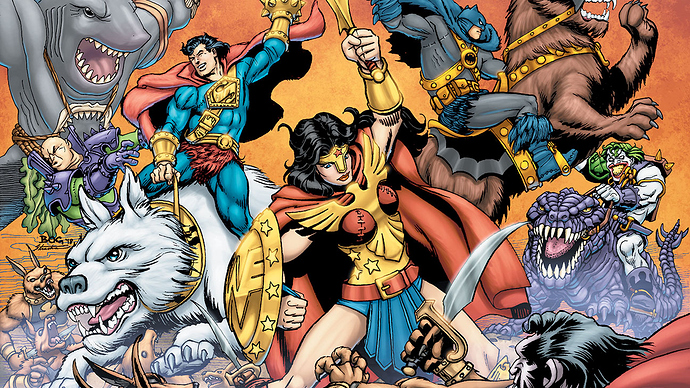 This is a tough one. I’m more inclined to admire individual pieces rather than entire lines. However, if I must select one, it would probably be DC Collectibles Designer Series. Both figures and statues from that line have great sculpts and paint apps that give them very close resemblances to their comic book counterparts. I wish they would continue making Designer Series figures, but alas that does not seem to be the case.
A much more recent (and expensive) pick would be the Sideshow Sixth Scale Figure line. Superman, 2 versions of Batman, Green Lantern, Lobo, Harley, The Joker, The Flash and Catwoman have been released, with previews of Wonder Woman and an updates Superman during this past SDCC.

If only Super Powers figures were cheaper…

Of all time? Super Powers, hands down.

Wow tough one to choose. I really think I have to go with Mattel’s DC Universe Classics line for the amount of amazing characters which were released. A close second for me is the Super Powers line even though I only ever had a Robin figure. They came out just when I was a little out of toy buying and playing and it was just before I started collecting comics. Since then though the Super Powers toys are amazing. I have yet to purchase any though. I also love the Mego line. I think I had a Batman, Robin, Joker, Riddler, and Penguin. Along with Batmobile, and maybe the Batcopter, or van. I wish I still had those. LOL.

The Dark Knight Collection would be #1: “It’s Batman like you’ve never seen him before!”

Super Powers is a close second. I just have a thing for classic Kenner and DC.