This is likely the last one of these I’m gonna do, just because I can’t think of any others that won’t be one-sided. So here’s a pretty divisive one. I have a hard time choosing between BTAS Poison Ivy, Arkham Poison Ivy, and Harley Quinn Poison Ivy. While Harley Quinn’s is hilarious, and Arkham’s has my favorite design, the Animated Series edges this one out for me. Because I love the creepy musical cues that play when she’s around, and House & Garden is one of my favorite episodes of the series. What about you folks? 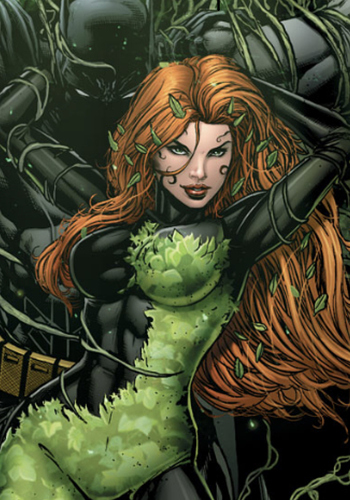 Totally agree, I have no great versions that come to mind other then The Animated Series

I thought the version from Arkham Asylum was pretty good.

At least she was the rare boss in the game who didn’t charge at you, though.

Arkham Knight was good and the Animated series was nice. Probably on my top list.
The Batman v TMNT one was not bad to her fun moment​

Oh yeah, I forgot about that scene… Definitely a highlight of that film.

Gotham for the millions time I love all Gotham likes lol

I could take Arkham Ivy a lot more seriously than B&R Ivy. It helped that she didn’t have any moments like this

I honestly would’ve really wanted to see Uma Thurman play Ivy in a serious setting. It’s not like she’s a bad actor in general.