What’s Your Comic Book Habit of Reading and Collecting?

Agree and I have controlled myself and not bought all the ones I like. I do have a rather large folder on my pc of saved variant cover pictures, so at least I can enjoy without paying for everyone.

I’ve been using digital for a few years now, mainly due to space. When I was living with my family, I had a small corner of the living room and a lot of that was filled with my comic boxes, trades and custom comic bindings. I moved out a few years ago and suddenly had all this space, but now I have to be careful with not only what I buy but where I’m gonna put it.If there is a comic I really want physically (like the Earth One books) I have to really justify buying it and where I’m gonna put it when I’m done.

Digital helps in that I can buy all the comics I want and I don’t have to worry if I have room in my long boxes or not.

I got into comics because of Marvel Unlimited and happily subscribed here when it launched as DCU. I was buying a few series on ComiXology for a while to keep up, but the expense caught up to me.

As far as collecting physical copies I’m just not into it. First I live in a small apartment and just don’t have room. Also I just like reading the continuing stories, I don’t really care to collect.

I’ve recently begun keeping a record of the comics that I’ve read for the 2021 reading challenge. I guess I’m “collecting” experiences and recording them in my Reading Challenge Google Doc. I’ve also just posted a mini review on a couple of the comics I’ve read, I guess that helps with the records of my experience, lol…

Is that a reading challenge here on DCUI? Or are you doing it on another website? I write in a book journal of what I read… I would otherwise forget!

Nearly a year ago now, I posted the 2020 Comic Reading Challenge, and in the eleven months since, this community has come together to share our love of the literal thousands of comics that we’ve read during this very… interesting year. Thank you so much to everyone who took part! Seeing so many people sharing their love of comics has truely a joy. I wanted to make sure that the challenge lives on, and started earlier this time around, too. So without further ado, a bit of refresher on the gui…

Here’s the reading challenge. I’m currently trying to make reading comics more memorable and fun for myself, so I’m trying different things to really make my experiences count. I currently am doing a thing where I occasionally record some notes on the comics I read so that by the end of the month I can have a summary that has some information on comic related stuff I did over the month, as well as two personal reviews on select stories. I’m currently trying to really expand this experience, so I’m still experimenting.

Here is a quick flip through of my book journal for the Batgirl 52 series. I printed the covers onto sticker pages and wrote a summary or what I liked about the story… Or disliked. I have fancier spreads but I wrote as I read to keep up! Still haven’t finished.

I wish I was that neat lol

As long as YOU can read it! It really is a good creative outlet and has served me well. It helps for me to write the date I started and finished, where I acquired it, and if it was electronic or physical. And now when anyone asks me what I think, i just flip through to see… It’s amazing how much I can forget!

I am a collector plain and simple. I read digitally on this app but love owning comics for the art. I have some on my wall with top loaders and a few graded. It is my one hobby really. Variants have made collecting that much more fun although I only get the ones I like. I only buy dc and independents sometimes. The dceased horror movie variants were amazing. 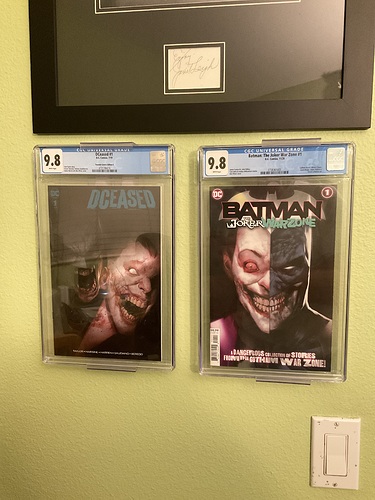 I am on a hybrid model of reading comics right now. I was getting every Future State and that is nearly over so I am going to dedicate more time in the back bins. I also pick up trades or hardcovers. Then there are the weekly Archie digest which are mainly reprints with one new story in them, I think?

I do embrace digital. Of course, I read books on DCUI but there are also sites where you can buy bundles of digital comics like Humble Bundle and Groupees. Needless to say, my hard drive is filled with comics from those sites. It also works out as I get a lot of digital trade paperback volumes and that money is going to charity.

I’ve been digital since DC and Marvel went ‘same day digital’ back in 2011.
It helped that New52 killed off my physical buying at the time.

I still have physical collections of stuff that I really really liked, like the Sienkiewicz era New Mutants, Moon Knight v1 and v2, Levitz Legion, JLI, ‘70s Iron Fist, the original Power Man/Iron Fist, DNA Legion, Sandman Mystery Theatre, Micronauts v2, the first DC Star Trek series, Secret Origins, the original Who’s Who and the updates, Who’s Who in the Legion, ‘80s Doctor Strange and the latter half of the original Defenders.

I also liked the Essentials and Showcase Presents, and have a few from both. Mainly for early Doctor Strange, Thor and JLA.
I still need to get the Doom Patrol in that.

For trades, I tend to get more Vertigo-type stuff. And when I say Vertigo, I mean Karen Berger/Gaiman/Moore/Morrison/Milligan Vertigo, not the later creator-originals Vertigo.
I have almost all the Moore issues of Swamp Thing in tpb (and what I don’t have collected in trades, yet, I have in floppies), the first volume of Promethea, the first volume Morrison’s Doom Patrol, and pretty much all of Allred’s Madman comics in tpb.

I also tend to buy a lot of Marvel digital trades because they go on sale frequently on Comixology.
I got almost a complete run of Werewolf by Night and Tomb of Dracula that way.
I also buy digital singles for older comics, but I now only buy singles if a run is complete in digital.
If there are issues missing, I won’t bother with it.
For example, I already own a complete runs of the Stern and Gillis Dr. Strange, and would love to get them in digital, too, but the Stern run is missing four or five issues. So I haven’t bought any of them.

I would say that where I’m at with comics is kinda like where I am with music or movies.
I’ll read, listen to or watch a wide variety of stuff, but only the things I really like get collected in comics/trades, albums or DVDs.
Owning physical copies is like a confirmation that it’s something that resonates with me.

I buy physical copies of my comics. I USED to read thru the app, but they removed the app from Xbox and I can no longer read on my 60 inch big screen TV. The screen on my phone just can’t cut it, especially reading dialogue. So I had to unsubscribe from DCUI. If anyone has a workaround that would allow me to use the app thru my TV, please let me know I miss it a lot.

So I’ve been into comics since the early nineties. I’m a bit “old school”, I definitely didn’t embrace the idea of digital comics, part of me STILL worries that physical copies of comics will go away completely. What brought me around to even trying digital was buying graded comics. Once they’re incased by CGC, CBCS, etc., you can’t open them up and read them. And I may fall into a category of comic book collector, I have a pretty impressive collection if I’m to toot my own horn, but more importantly I am a comic book READER, I have read every comic book I own.

To finally address the main question, I have a pull list at my local comic book store and I’ll go in sometimes weekly, but more often every few weeks and pick up my stuff. Generally I read them all in the next day or two, but there are times of the year when I’m super busy so I can be a few issues behind. I don’t know the exact number of comics I have pulled monthly, but I’d estimate it near 30 (yeah I’ve got a problem), so they can pile up. When that happens I sort them by title and read them that way, like for example I just finished the last 3 issues of Action and Superman (pre-Future Slate) and it was great because remembering what happened previously is much easier, it’s like a TPB experience, only with individual issues.

However when I’m completely up to date I sort my comics by what I want to read the most and then start with the stuff I’m least excited to read. It’s like a delayed gratification before I get to my favorite characters/writer/storyline. It’s also why I sometimes have a few issues of one title left over (like my previous example of the Bendis Superman stories).

Another thing about collecting comics is that they hold a value. Sure some might be worth $1 some might be worth more but I like I can sell if I need to when digital does not give me that option. Love both mediums as I obviously read digital on here daily.

One workaround is to mirror the screen from your phone to the tv if you have a compatible tv or a roku.

get a windows pc, any type of xbox, and bam, instant screen cast to the tv
Oh you will need to download an app on the xbox though; (I personally prefer to read on a tablet though, its the closest thing to actually having a comic in your hands, when it comes to digital

I’ve recently leaned into digital. I have very limited space so digital lets me have the shelf I wish I had IRL.

I like the tablet too but my most comfortable tablet reading experience was the fire tablet but no more! I use the Samsung tablet now, the large one and it’s uncomfortably big.

I’m digital now and only buy GN of stories I really love. I used to get the TPBs but when I moved across country and to a place without a vendor it was just more efficient in both time and money to go digital but I do miss getting that DC package in the mail every month! All my old TPBs are still at home with my mom but one day when I’m home I’ll have to decide what to *gulp part…with…