what is your favorite batman comics

Please put your favorite batman comic and why

I really love Batman: Black and White, a collection of vignettes by a wide variety of writers and artists that explore a whole spectrum of takes on the character.

All star Batman was really good

So many! Really liked new 52 Snider and capullo run.

Detective Comics #826. I’ve been meaning to read the rest of Dini’s run now that it’s on the app, because that issue was really good (also, I love Dini’s work on Batman: The Animated Series and the first two Arkham games).

For a longer run, I’ve been reading Chuck Dixon’s Detective Comics recently and enjoying that.

For a specific story arc, while Hush is really good, I’m actually partial to the Knightfall/Knightquest/Knightsend story. Sure, it’s really dumb at a lot of points, and Knightquest has a TON of filler, but the themes and scope of it are great, it introduced Bane (who’s one of my favorite villains) and Azrael (who I think is actually a really underrated character), and it launched both the Robin series (which is genuinely good) and the Azrael series (which is sort of a guilty pleasure of mine).

“Batman of Zur-En-Arrh first appeared in Batman #113 (February 1958), in a story titled “Batman—The Superman of Planet-X!”. It was written by France Herron and drawn by Dick Sprang.” - Wikipedia

It not only is a good read, but returned in Grant Morrison’s run of Batman R.I.P. 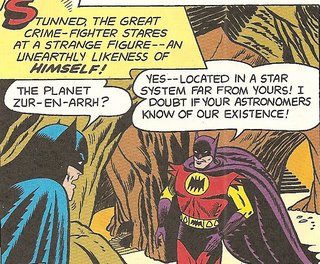 Long Halloween. Just an amazing story that features so many of Batmans rogues.

The New 52 Batman with Scott Snyder and Greg Capullo. The Court of Owls and Death of the Family stories are amazing.