Okay, we need to talk about what happened, because…holy crap. I remember hearing the theories and thought they sounded dumb. I thought after the reveal that Will was Hooded Justice and Angela’s granddaughter that they wouldn’t play around with the mythos that much more, but…nope.

I don’t know what the ■■■■ just happened!?
Thank god Looking Glass is alive…?
Veidt’s trial was weird as ■■■■.
Another great “origin” background story.

Every episode has been consistently great but this, WHAAAAAAAAAAAAAA

Yeah, I never thought I’d see Jeremy Irons/Ozymandias just rip a huge one (with a little squeak for punctuation after), followed by being found guilty by a jury of pigs, but…here we are.

It was also cool to see how Angela got to where she is, and now we know why her theme is called “Nun with a Motherf*&*ing Gun.” I wonder if that movie is real or is based off a real blacksploitation flick.

As for Angela…coming down off the initial WTF of the reveal, I’m starting to question if this is getting a little too out there. Like, it’s one thing to have Angela be the grandaughter of the original masked hero of this universe, but also having her be the lover of Doctor Manhattan? That just feels…too much.

But, I’m going to keep going and I’m willing to be convinced otherwise.

also having her be the lover of Doctor Manhattan? That just feels…too much.

It can also be that the real Cal died in the car accident and Dr. Manhattan stole Cal’s identity for some Dr. Manhattan reason. Lol

Nope. Brain has exploded. Will need time to reboot…

My favorite episode so far. Lady Trieu just gets better and better.

Also, Ozzy’s toot was a doozy.

I’m rewatching other episodes to see if Cal’s actions seem like Dr Manhattan, and I totally see how his explanation of life and death to the kids would sound the same coming from Manhattan. What a show.

I know people started throwing out that theory more once that scene happened. At the time I just figured it was one of the weird alt-history things about this universe. Like, after 30 years of a super liberal Presidency in Robert Redford, I figured atheism at least in regards to the Judeo-Christian ideas would be spoken more openly.

Another part that makes it seem like it was there from the beginning was how Cal reacted to Laurie coming to Judd’s funeral. 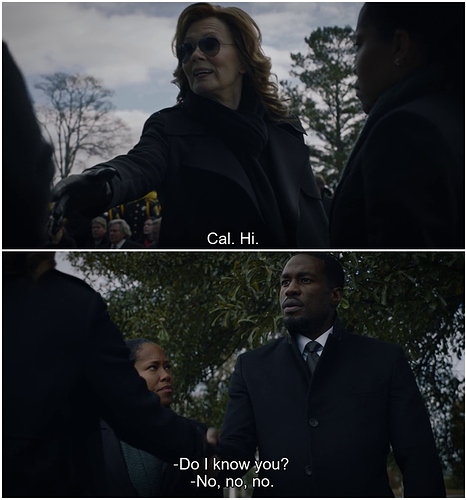 Gives another dimension to Laurie and Angela’s dynamic, with Laurie mentioning how hot Cal is. Not to mention adding some extra reason why Angela had a rocky dynamic with Laurie – who wouldn’t be awkward working with your partner’s ex?

Also if nobody know this yet, they update this weekly after each episode if necessary.

I think they were going for the added contents which is kinda similar during the original Watchmen comics where Alan Moore added something at the end of each comics like “Under the Hood”. Kinda interesting but I haven’t read all of them yet.

At this point, I have no idea how Veidt is going to be saved, even though his flatulence seems to suggest he is quite confident his sentence will be short. Will Dr. Manhattan swoop in like a literal Deus Ex Machina? I haven’t had this much fun waiting for a weekly episode to come out, and each episode seems to build more and more upon the last. Man! I can’t believe how well Lindelof has disguised all his foreshadowing up to this point.

I think i know who Lady Treue is.

That’s a theory I’ve seen floated around, and I think it’s possible. But what’s interesting is that when Angela asked Lady Trieu where her father is, Trieu replies that he’s here with them. You know what is also there? That statue of Ozymandias.

I wondered about that statue too. It is also possible that Lady Trieu simply derives her (flawed) view of equality through utilitarianism.

Just watched the episode and…my God, I haven’t reacted that strongly to a twist ending in a long time. My jaw just about hit the floor when Angela called Cal “Jon.” This is absolutely insane and I’m loving every second of it

A few other thoughts:

Seeing that she also played Darla and young Sister Night, I can’t help but think of the crossover between this world and the Shazam Family. Though I think knowing what happened, this moment would have to be in there.

Oh my God. I know the show and Doomsday Clock are different timelines, but I’m never gonna be able to look at this panel the same way again. Who would’ve guessed that Dr. Manhattan and Darla would have such a strange connection?

I am curious how the plot can possibly continue once Manhattan is restored. I guess we don’t know how much of his power is returned in the aftermath of shedding the Cal persona.

Is Treue working with the 7th Kal, despite her protestations of “saving the world”? Does the Clock have something to do with stealing Jon’s power?