Upcoming DC Comics Your Excited For

What are you most anticipated comics for the 2nd half of 2019 and beyond? Certain announcements that just flat out have you stoked?

Batman and Superman by Joshua Williamson August 2019
-What Ive read of his acclaimed Flash run, Ive liked. Batman and Superman are two of my favorite characters, cliche I know, but nothing beats the Worlds Finest. These 2 characters have so much chemistry when their together, with a writer like Williamson, you can bet Im looking forward to this.

Young Justice by Bendis (Ongoing)
-This series is ongoing currently and pretty well recieved. Anybody who knows Bendis, cant deny he has a talent when it comes to “younger” heroes. Bendis teased that the series will be venturing into the Kingdom Come Universe. This excites me a 1000%. Kingdom Come is one of my favorite DC books of all time.

Batman: Three Jokers by Geoff Johns and Jason Fabok. 2019/2020???
-Okay, this is gonna be a big deal when it releases. With Johns and Fabok its already gonna attract a ton of people, and the three joker being a conspirach theory among fans for years finally coming to light. Johns is an all-time DC great and with Fabok this book is gonna be stellar no doubt.

Justice League by Scott Snyder Ongoing
-One of DC’s best books and I have a feeling its gonna continue to impress. Its been teased that Starro, ahem, Jarro, is gonna continue to be a key player and were gonna have the “Doom War” in August which is also exciting. Snyder is a writer who really doesnt seem to care what anyone thinks and just goes for it on his crazy ideas and its great.

The Green Lantern by Grant Morrison Ongoing
-One of DC’s best books right now, haha I say that a lot. Morrison is an all time fan favorite and this Green Lantern story has been absolutely stellar and one for the history books. Hes teased a “multiversal” green lantern event upcoming in the series featuring all kinds of different Green Lanterns from different universes. Any Green Lantern fan should know this series is a must have.

Freedom Fighters by Venditti(Ongoing)
-A few issues into this absolutely stellar series. I love this New Age of Heroes line of DC. The Terrifics by Lemire was soooo good. Some of these creator teams are absolutely stellar. Venditti has been cconsistently a great DC writer. His Hal Jordan and the GLC was stellar, Hawkman was also amazing!

Justice League Dark by James Tynion(Ongoing)
-Tynion is the Snyder apprentice thats killing the game. His detective comics run was great, this Justice League Dark has been no different. Very interested to see where he will take it, the roster for this Dark series has been one of my team rosters yet too.

Detective Comics by Peter Tomasi(Ongoing)
-Tomasi’s Superman run was one of my favorite DC runs in recent years, this detective comics run has been fantastic as well. An excellent followup to Tynions great run, Tomasi has been very consistent in his quality with Superman, Super Sons and Batman and Robin.

So these are some of the series that I know of that are ongoing or coming soon that Im looking forward to.

What are YOU looking forward to? Im curious if there has been other awesome stuff announced that Im not aware of. 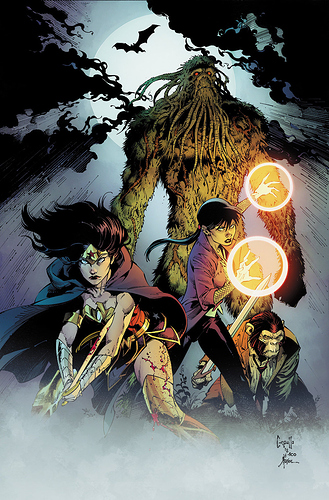 Echo Morrison’s Green Lantern. Am absolutely loving it. The last issue, inside the power ring, might be a masterpiece.

But I think I may be most excited for Sean Murphy to release the sequel to White Knight. Loved the first one, one of my favorite artists, glad to see him shine like this.

Didnt know White Knight was getting a sequel! Count me in as well.

Definitely the sequel to White Knight, along with The Last Knight, Superman: Year One, and The Flash: Year One (if that counts).

Anyone know if there is gonna be anything new with the Justice League of China? They let New Superman run for a few extra issues because of fan reception and then cancelled it.

-Superman: Year One
-Lois Lane
-Superman’s Pal Jimmy Olsen
-Batman/Superman
-Event Leviathan
-Year of the Villain
-the conclusion of Doomsday Clock (if it ends this year)

Terrifics is so good. Wasnt sure if I should add that since Lemire is off that project now. But Ive heard Yang has done pretty good as well, doesnt surprise me, Yang did phenomenal with New Superman.

Correction: Freedom Fighters is not from the New Age of Heroes line.

Hawkman is my favorite book from DC that I am currently reading. 12 issues in and so far this is a definitive story for Carter Hall. I stress anyone who has never tried the book to buy the 1st trade when it hits!

Love what is going on in The Flash. Year One is 2 issues deep and already shaping up to be essential Flash reading. The arc prior to this with the Trickster was superb as well!

Hawkman is so good. Ive only recently becoem familiar with Venditti but he is very good. Hawkman, Hal Jordan and The GLC, Damage, Freedom Fighters, hes been putting out top notch work for DC.

I’ve been getting away from on-going series lately because I’m spending so much time catching up on old favourites courtesy of DC Universe, but I’m very excited Young Animal is coming back and am particularly interested in N.K. Jemisin’s Green Lantern book.

Batman/Catwoman should be good. Tom Kings Batman run was kind of hit or miss for me but Im still gonna try the new series, he is a good writer still.

Still waiting on The Witching Hour

Is Superman Year One not included in DC Universe subscription?

@mleonardo The first issue just released, and comics don’t come to DC Universe until a year after they were published, so it’s definitely not arriving until next June. And even then it may not come since it’s published under the Black Label imprint, and DC Universe doesn’t get things published under imprints.

Only thing better than that would be the return of the JLI.

Bendis just teased the return of one of my favorite duos in recent years, the Supersons! But their a little older now…

That should be good. I like the duo a lot. I feel like Super Sons would be an amazing animated series/movie.