Kara Zor-El has seen some epic adventures over the years, but has recently found her life without meaning or purpose. Here she is, a young woman who saw her planet destroyed and was sent to Earth to protect a baby cousin who ended up not needing her. What was it all for? Wherever she goes, people only see her through the lens of Superman’s fame.

Just when Supergirl thinks she’s had enough, everything changes. An alien girl seeks her out for a vicious mission: her world has been destroyed and the bad guys responsible are still out there. She wants revenge and if Supergirl doesn’t help her, she’ll do it herself, whatever the cost.

Now, a Kryptonian, a dog and an angry heartbroken child head out into space on a journey that will shake them to their very core!

Brought to you by Eisner Award-winning writer Tom King ( Batman/Catwoman, Mister Miracle and Rorschach ) and Eisner nominee artist Bilquis Evely ( Sandman Universe: The Dreaming ) this maxiseries promises to be a character-defining masterpiece the likes of which has never been seen before for DC’s Maiden of Might.

All I can say is sign me the heck up!

This is exciting news! I’ve been reading Supergirl for the first time lately, so I’ll be ready for this when it releases.

High hopes for this

Any King is a must read for me.

More Tom King in the Superman franchise is always a good thing.

I’m less certain about Tom on writing Kara. I fear this is DC doubling down on the latest takes that the Supergirl community has rejected over and over.

Tom’s name will probably bring readers but his fanbase will leave when his run is over. DC needs to find a path back to the core reader base that are looking to be in it for the long haul. Maybe Tom will deliver that, but if it is to be, DC needs to 180 from the path they have been on and find the fandom again. This cannot be another infected/angry moon Kara again. The sword has me worried. Krypto has me worried. Another melee weapon toting angry Kara story where the dog is the voice of reason will never be accepted as character defining. She has been around for over 60 years. The fandom are well versed in the character defining moments. This needs to build on those core values, not stray from them.

I really really hope this will deliver. The Supergirl title needs more than a skilled famous writer. It needs a writer that wants to tell Kara’s story. Not the writers story told by a character in a blue suit. And most of all not a writer again plugging their own favorite characters or animals in the Supergirl title with the main character riding shotgun.

King’s Superman book was really good. Bilquis art is solid. On paper this is the best Kara creative team since the Being Super mini. Supergirl really fizzled out and was aimless for a while there. This has me excited again.

I absolutely loved “Up in the Sky”, so I’m really looking forward to this! Loved hearing the news this morning!

This is great news!

I’m a big fan of both Evely and King, and definitely looking forward to Kara getting a run that’s got some grandeur to it.

I haven’t enjoyed a Supergirl series since Peter David’s run from the 2000s, but if Tom King is writing I’ll definitely give it a shot.

Worth noting that this isn’t a run on the regular series, but an 8 issue self contained mini series. 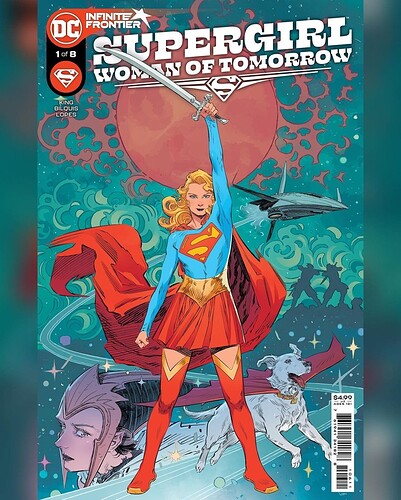 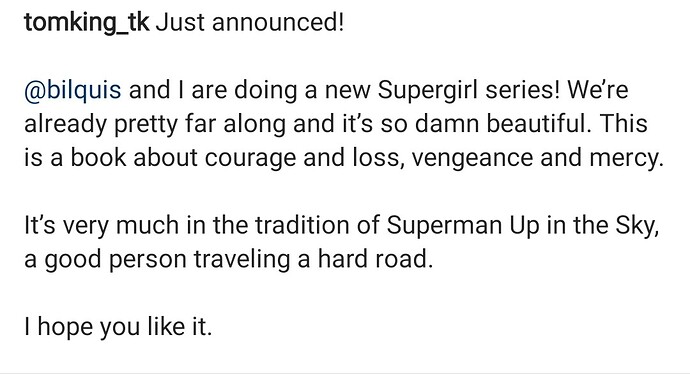 Tom King writing anything in the Superman universe is a must for me after Up in the Sky.

That gives me a little more hope. King’s DC work has been so hit-or-miss for me, but Up in the Sky was pretty special, so taking some cues from that is definitely a good idea