The third season of DC Universe’s Titans is already being planned.

Titans showrunner Greg Walker was able to talk about his plans for a possible third season of the DC Universe’s flagship series.

In an interview with ComicBook.com, Walker was able to talk more about what is in store for season 2 and his hopes for the series, post season two.

“No official green light,” Walker said. “I remain optimistic and hopeful and I’m steaming ahead as if we… No one’s stopping me to steam ahead, but you know, and hopefully they don’t. I go by the ‘beg forgiveness rather than ask permission’ mode. So we’ll just keep on breaking story and hopefully no one notices that we just started making Season 3 because we’re excited about it.”

Walker was able to explain that the history behind the original team of Titans would inform a lot of the story in season two. He alluded to Esai Morales’ Deathstroke having a prior encounter with the original Titans that will put the second generation in his crosshairs. With this in mind it is likely the series will take notes from The CW’s Arrow as that show’s plot heavily relies on flashbacks to Oliver’s past experiences.

“Both the Titans history to the books and Titans history from what we think happened during the intermitting years between when the Titans first formed, when they broke up, and the present [play into Season 2]. So there’s a lot of backstory that gets revealed that was lurking in the shadows last season,” Walker said, later adding, “There’s so much about this season that’s about how families deal with the sins of the past and how unless you deal with them, they’re a cancer that eats away at you.”

Walker promised that going into season two the series will continue to take inspiration from the iconic 1980s The New Teen Titans run from legendary creators Marv Wolfman/George Perez.

“That’s one we’re the most interested in writing, and I think it’s in the Wolfman, Perez work too,” Walker explained. “At first it would be teenagers rebelling against their families, and then having to… at some point you can’t define yourself, or you can no longer define yourself as being against your family, you just want a family of your own and then how do you deal with that? So the challenges and pressures of wanting a family and keeping it together are a big themes for this season.”

While Titans season 3 has yet to be greenlit to our knowledge, it is not impossible to suggest that it has been. The second season was greenlit ahead of season one’s premiere at New York City Comic Con, where it received praise from critics and fans alike. Titanscurrently has an 80% on review aggregator Rotten Tomatoes.

In the groundbreaking first season, Dick meets Rachel Roth aka Raven, a young girl with special abilities brought on by a mysterious darkness inside of her that she struggles to control, and together, they find themselves embroiled in a conspiracy to bring about Hell on Earth. Joined by the mysterious Kory Anders aka Starfire and lovable Gar Logan aka Beast Boy, these lost and disparate individuals become a surrogate family to one another and a team of heroes for the world.
In season two, following the aftermath of their encounter with Trigon, Dick reforms the Titans. Under his supervision in their new home at Titans Tower, Rachel, Gar and Jason Todd train together to hone their hero abilities and work together as a team. They are joined by Hank Hall and Dawn Granger aka Hawk and Dove and Donna Troy aka Wonder Girl. Although these original Titans attempt to transition into a regular life, when old enemies resurface everyone must come together to take care of unfinished business. And as this family of old and new Titans – including Conner Kent and Rose Wilson – learn to co-exist, the arrival of Deathstroke, brings to light the sins of the old Titans which threaten to tear this new Titans family apart once more.
Titans stars Brenton Thwaites as Richard “Dick” Grayson / Robin, Anna Diop as Koriand’r / Starfire, Teagan Croft as Rachel Roth / Raven, and Ryan Potter as Garfield “Gar” Logan / Beast Boy. The series is also making a few additions for its sophomore outing, with Joshua Orpin and Esai Morales playing Superboy and Deathstroke, respectively, while Chella Man and Chelsea Zhang have also joined Titans as Deathstroke’s children. Natalie Gumede has signed on to play Mercy Graves and Iain Glen is on board as Bruce Wayne, a.k.a. Batman.
Titans season one is scheduled to premiere on the DC Universe streaming service on September 6th, 2019. Titans season one is available for streaming on the DC Universe streaming service in the US and on Netflix internationally

REPORT BROUGHT TO YOU BY THE FANDOMWIRE NEWS SERVICE 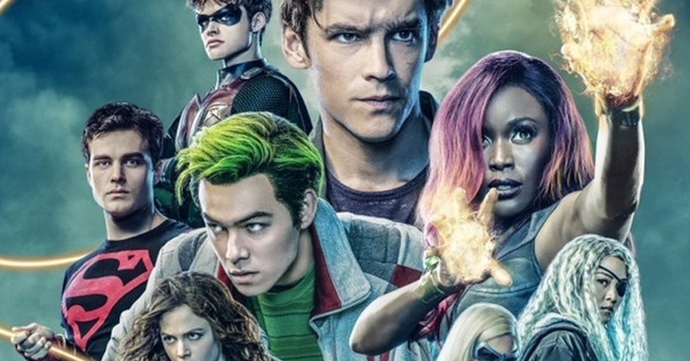 Not a fan of the show, but as show runner that is his job and he should be hard at work on that.

I hope season 2 is better than the first one. I didn’t really like the first season, but the show has potential. Sometimes it takes a season or two for a show to find its footing. Hopefully Titans has and season 2 will be fantastic.

I just hope they keep it dark and character driven. That’s how the comics mostly are and sets it apart from the Arrowverse. Too much escapism and action and no story.

I can’t wait for this! I would rather a whole episode with flashbacks, but I’m sure it will
work if they’re doing flashbacks throughout the show.