Tim Drake: Robin Gets His Own Ongoing In September

Um, you realize Tim and Steph are both like 16, right? (No offense meant to any and all teenage parents out there) So, this comment really doesn’t make sense.

I’ll probably wait a while before picking it up, I’m not too impressed with Fitzmartin. But who knows maybe she has a really great story in mind!

They are in college now

One both are college age and two ,they did the Steph being teenage parent story in the 90’s and her giving the baby up for adoption, but this time it would be Tim’s. Do you have any better ideas for what to do with Tim?

They are 18 at oldest, I think. I misspoke with 16. I thinking of an older storyline. My bad.

Tim can stay with Bernard and learn more about himself and Bernard. We haven’t had much time with Bernard. Everyone is hating on him because he isn’t Conner or Steph. It’s okay for Tim to be with someone who isn’t a member of the hero community.

And that’s all I’m going to say on this topic here. I’m not going to derail another thread about this. This thread is about his solo series coming out in September. Which I am very excited for.

I’m really excited for this! I’ve been a Tim fan for almost as long as I’ve been a dc fan, but its his first solo series since i started reading. (yeah i read his older stuff but its a different thrill to read it as it comes out)

I can’t wait to see where they go with him!

I sort of wish it was Tim Drake: Red Robin.

I gotta agree with row here though, it feels like he’s growing out of the robin mantle and should be his own hero not an extension of batman

(hopefully he figures out a better name than drake this time)

I thought I’d be more excited for a Tim Drake title, but Fitzmartin hasn’t impressed me with the character, and Rossmo’s art might be too stylized for Tim. I’ll check out the first issue at least, cause I’ve been a fan for years. But I honestly wouldnt be surprised if the covers are the best part.

I’m excited to finally get some new Tim focused stories, but cautious because I hope the writing and characterizations aren’t overly simplistic and targeting a younger crowd. And yes, please give Bernard a personality, his cute smile can only go so far. It would be nice to have them talk and get Bernard’s coming out story as well.
Am I the only one who doesn’t like any of the cover art? I mean, Tim is back, give him some glory! Give me a striking pose that is dynamic, not munching on bat snacks on a rooftop!

On Rossmo’s art, I think it fits Harley fine, but as for Tim…I’ll give it a chance.

Maybe we’ll see a new side to Rossmo’s art that will fit Tim like a glove? Better to hope for the best, I say. 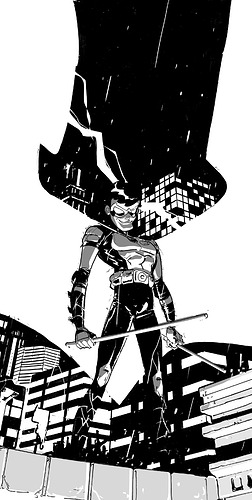