Tim Drake: Robin Gets His Own Ongoing In September

Written by Meghan Fitzmartin (who’s been writing him the most the past year with the stories in Batman: Urban Legends, the recent Tim Drake Pride Special, and the upcoming Dark Crisis: Young Justice series) with art by Riley Rossmo. Here’s a description:

This kinetic, high-energy series pulls Tim center stage as a mystery over a year in the making takes shape. A new villain who’s been hounding Tim from afar decides to take things up close and personal, putting Bernard and everyone else Tim cares about in peril. All that and Tim finally carves out a corner of Gotham City just for himself, and sets up shop in his very own…murder-shack-boat?

If I’m honest, I’ve thought the stories that Meghan has been doing has been kind of mid, but I wonder how much of it is down to having to deal with smaller page counts. Hopefully with a full series she can really do something cool and make Tim a compelling, need to read character for a change. And could we please give Bernard a personality?

Also, the Rossmo art is surprising, because I thought he was a perfect fit for Harley Quinn but wouldn’t put him on a more standard superhero book. Could be cool though.

Anyway, link to the article: 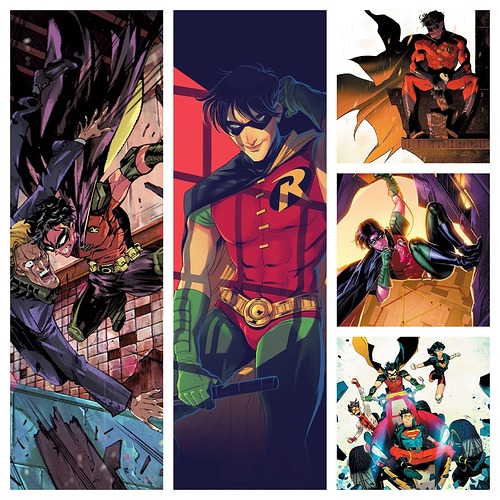 Hurray, Tim’s got a new solo gig under the “Robin” banner!

Sets aside money for his favorite DC character created since 1961…

Good thing for DC I buy for characters rather than creators. I’m not familiar with the writer, but for me Rossmo’s art is an utter catastrophe. Hopefully, he’ll be gone after the first arc.

I think this is great for Tim fans. I don’t think he’s had his own solo series in quite a while, so I really hope it goes well and that people enjoy it.

Loving that you remembered that Tim’s my fave

And thank you for the heads up @Jay_Kay!

Kinda wondered why I was quoted in that one.

Anyhoo, you get a hug too for being Super Cool.

Anyhoo, you get a hug too for being Super Cool.

Thank you, distinguished TDR devotee (had no idea he was your fav, BTW)!

I’m not a fan of making him bi, but I hope that the book is good

It’s possible that Fitzmartin’s been hampered by the short story format, but…I really, really dislike what she did with Tim and Steph in the Pride special this week (making Tim a liar and pretty dumb, even though I did like his choice to save Steph…that’s a choice he should have made a long time ago), and Steph became a flattened prop with no real emotional reaction of her own. So I’m deeply disappointed in this direction by DC.

And as you say. Bernard has no personality other than “be a prop for Tim” either. Very frustrating.

I like Riley Rossmo, but I feel strongly he’s a much better fit for Harley than he is for Tim. But it’ll be energetic. For sure.

Yeah, I’m not super enthused, but I think I’ll at least give it a shot. I think her Dark Crisis tie-in will probably be another test at least with writing Tim in more interesting scenarios (I’m sure with everything going on and the nostalgia tie-in there’s probably no time for Bernard in that mini).

I just…ugh. This week’s special has really turned me against Fitzmartin writing both Tim and Steph. Maybe some distance will give me more equanimity, but I’m currently just very disheartened.

I said nearly thirty years ago that I’d rather see Tim with literally anything else in the animal, vegetable or mineral kingdoms rather than Stephanie.

Why Rossmo on art though? Not a fan of their style…

Tim Drake fans can get caught up on the beginning of this story with the Tim Drake Pride Special, on sale now.

Okay, that makes it easy.

I didn’t care one way or the other about Tim and Bernard, but that Pride special looked like fun. So I’m choosing fun.

And a new Bat book… whaddayaknow – I was beginning to worry for a moment.

Oh, and I’m liking the choice of Riley Rossmo. It’ll give the book it’s own style.

I got so excited about this that I made my own thread because I didn’t see this one.

Yes, I’m thrilled he is getting his own series again. I sort of wish it was Tim Drake: Red Robin. Not Tim Drake: Robin. But a solo series is a solo series and I am excited for it. I do need to get his pride special this weekend and read it though.

Definitely glad to see this. 1 potential downside to DC having Tim come out is given that he already wasn’t appearing in the comics that much, so this new part of his identity could’ve risked fully tokenizing him, w/ him mostly only being dragged out during Pride and forgotten about the rest of the year. But thankfully this is a good sign that that’s less likely to happen now. Overall I still very much support Tim’s coming out, DC just needs to make sure he continues receiving meaningful development beyond that. I’m hopeful this book will do just that and also help ensure his newfound sexuality doesn’t start to fully define him either

Let me preface this comment by saying that I really like Tim. While he isn’t my favorite Robin he is a great distinct character that I like to read about.

My issue is with the direction of Tim’s character under Fitzmartin. I DONT mean that he is bi now that has great potential. I mean how it was handled. He was in a relationship with Steph. Now suddenly he is dating milk toast Bernard with no internal struggle to come to terms with his sexuality. No character development it just happens.

The solicitation for the book is very high energy, upbeat, and sassy. That just doesn’t fit the tone of of who I have read him to be. By that I mean tynion’s run on detective or the Red Robin series. While funny, Tim doesn’t get up to hi-jinks. He is smart and methodical. I didnt read Bendis’ Young Justice he might have been goofy in that or other things I never read.

Now saying that it is just a solicit you never know until you read the book. I hope it is good because Tim deserves a good on going.

I think that the better direction to go with Tim would be to have him knock Steph up and then have Tim try to build a family. Make Tim the both smart Robin and the one who makes bad decisions without thinking things out. That would give more fuel for future stories then randomally making him Bi