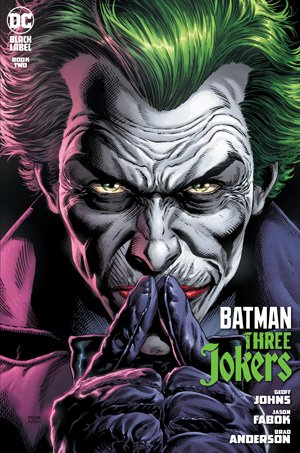 As Batman and Batgirl follow an unexpected thread linking the three Jokers with someone from the Dark Knight’s past, Red Hood dives headfirst into trouble and finds himself struggling to stay afloat without the aid of his allies. 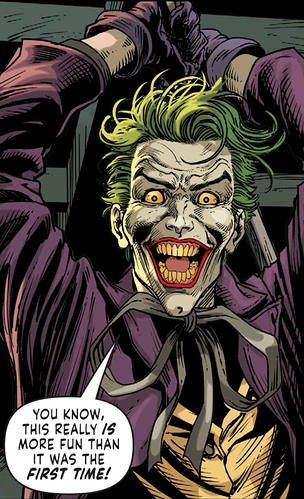 Fun issue- I thought I knew where they were going, then the ending threw me for a loop.

Two issues in and I had a feeling we wouldn’t get any real answers until the third issue.

I’m enjoying it. I’ve usually been a little burned out on Joker stories (I haven’t been too crazy about Joker War), but I’m liking this.

Two issues in and I had a feeling we wouldn’t get any real answers until the third issue.

I feel like they strongly hinted that Whoever the original Joker was, he created the other two. Now by the end of issue 3 we’ll probably get another Joker. The Mobius chair couldn’t answer because its like asking what the Pittsburgh Steelers real name is- which one?

I almost choked on my water with that Steelers joke

This was an incredible issue, with great themes and character work, though I get the feeling that a lot of the discourse is going to be focused on only one panel.

I like the books so far, and I was surprised how the Joker interaction ended. I liked how Barbara’s recovery was portrayed and how that might help Jason move forward too. I do think a hug or forehead lean or even a forehead/cheek kiss would have fit better as the ‘moment.’ I do agree with @Jay_Kay that the kiss was probably just a kiss, not a big romantic connection or reveal. I actually thought the rescue scene seemed more intimate (loved this scene!).

The most questionable moment for me was Batman 's reaction to last issue. I do hope we get to see more from Bruce next time, although I am loving the gocus on Babs and Jason so far. I just want more of everything! Except naked almost-Jokers… I saw way too many of those poor pastey guys.

Definitely – I loved how Barbara and Jason connected and how she gave him something he really needed. I just wish it was done in a more platonic way – like unless they’re serious about making Barbara/Jason a thing, it’s just going to confuse the issue.

Speaking of those two, someone on Reddit found a great potential callback in the scene where Barbara rescues Jason, comparing to to when Barbara comforted Tim in the flashback in Batman Beyond: Return of The Joker.

So this issue 2 For Batman Three Jokers was great, if this is the sequel too the Batman the killing joke, in issue 3, of Batman The Three Jokers, Will we get see and read Barbara Gordon, recovery from being, Batgirl Too, Oracle, Too, Batgirl Reborn. I can not wait What Joe Chill will say on Carmela, The Question, Why Did Joe Chill Thomas and Martha Wayne, Do you think Joe Chill will be the Third Joker,

This issue surprised me in a lot of ways. Didn’t expect to see Joe Chill turn up like that, and while I had heard about the kiss prior to reading the issue, I’m relieved that they won’t be going in that direction.

It was also interesting to see how Johns is continuing to explore the themes of healing and trauma with this issue. Not just necessarily Bruce’s, Jason’s, and Barbara’s experiences, but even looking at the Jokers. I mean, Joker 2 literally eats dinner and pretends to still have his wife and son from Killing Joke, and Joker 1 brings up the issue that it hurts for him to laugh. I don’t know, just seems interesting to me.

As always, the art was spectacular, and I can’t get enough of those Easter eggs!

well im not gonna write anything about that one panel but…

Oh, that’s interesting! The rescue scene reminded me of Babs comforting Dick at the end of Nightwing (1996) 88.

I enjoyed this issue. It raises more questions than answers. Hopefully we get a bunch of answers in the next issue.

I’m curious, does anyone else think that that Joker that they thought was Jason first, is going to be important somehow? He was coherent enough to answer that he wasn’t Jason. But also seemed to understand what they were looking for? I have no idea who he could be, but still.

I also wish they hadn’t done that at the end. A simple embrace would have been fine. But oh well. Solid issue either way.

Do you think Joe Chill will be the Third Joker,

I think that’s definitely their plan, but I don’t think it’s going to work out completely.

In fact, I have an idea of how the story will end. I’ll spoil it in case I’m right. The story will end with the two Jokers seemingly dying, with all these different people being experimented on with varying success. But in the last page, when our heroes think there’s a chance the Joker is finally gone for good…a white figure pops out of the ashes, sees his reflection, and laughs. The last panel shows in his hand a vial of the stuff they were using to create new Jokers. Essentially: the Three Jokers are dead, but The Joker is still alive, and no matter what they do, The Joker will always live.

I also wish they hadn’t done that at the end. A simple embrace would have been fine.

I feel the same way. Hell, I think an embrace would have worked a LOT better.

Anyway, another fun Easter egg I found on Reddit: the two thugs that Red Hood beats down look just like the two thugs from the opening of Batman '89. 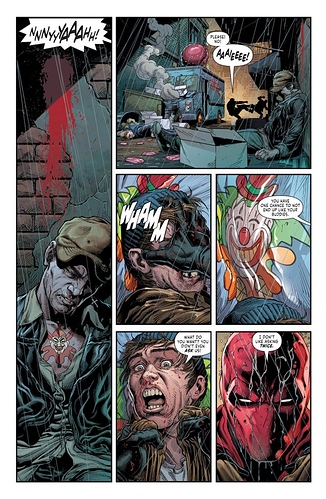 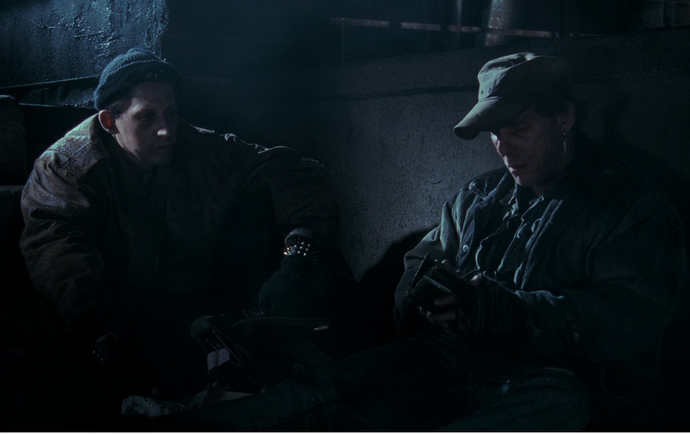 Really makes sense because apparently the Burton movies were a HUGE influence on Fabok, his first introduction to the character and mythos. You can especially see it in how he redesigned Batman’s costume – which honestly, I would be perfectly fine if DC kept this look around for all three of them. 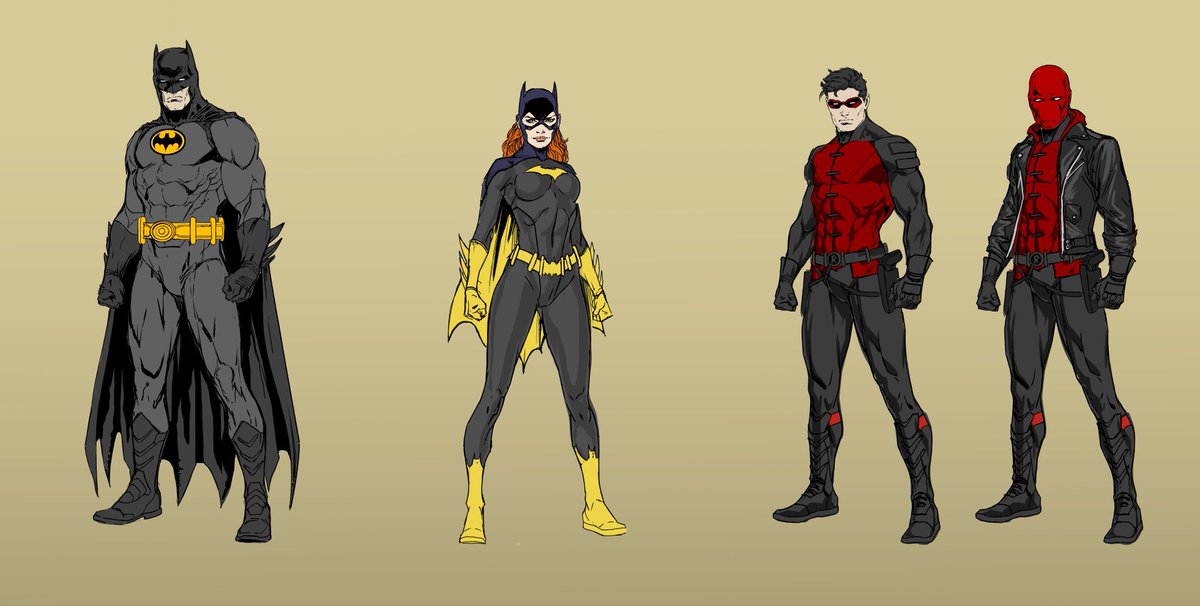 So…
I read this today and I’ll catch up on the discussion tomorrow, but I’m curious how you all feel about how cannon this story is with the mention of a certain someone who was killed during City of Bane…

I don’t generally concern myself with how cannon stories are but I feel it’s important here if we are looking for answers as far as who Joker is.

My guess is it’s cannon. It’s not in Geoff Johns’s nature to do anything that’s outside of continuity.

I just figure it’s either set before he died or after he (inevitably) comes back.

I’m pretty sure that it’s been mentioned time and time again by Johns that this is meant to be a “in continuity… kinda” story. Johns is calling back to a lot of different pieces of Batman lore, ie the Moxon crime family, Gaggy, the laughing fish, not to mention all of Killing Joke and Death in the Family. So in that way, the story is definitely putting itself in continuity, in as much that if you drew up a timeline of iconic Batman/Joker stories and ignored things like reboots, Three Jokers would fit in pretty seamlessly. Seeing that a certain someone is alive and well here despite meeting their demise in City of Bane, you could make an argument that Three Jokers simply takes place at some point before Tom King’s run (or at least, before City of Bane). It’s also worth pointing out that if you are up to speed with Tynion’s current run on Batman, he is doing something with the Joker which most certainly does not tie in to Three Jokers (and his Joker story is also calling back to previous continuity, specifically Snyder’s Death of the Family, as well as fabricating a retcon or two for the sake of giving his story more weight).

Long story short, I don’t think that Three Jokers is in main continuity, but I do feel like there’s more continuity between Three Jokers and the overarching Batman mythos than other Black Label books have been.

Also I wanted to point out an Easter egg I just noticed on my second read of Three Jokers No. 2: If you look at Joe Chill’s inmate number, 0331939, it is actually a reference to the first issue that showed Batman’s origin story (Detective Comics No. 33, which was released in 1939).