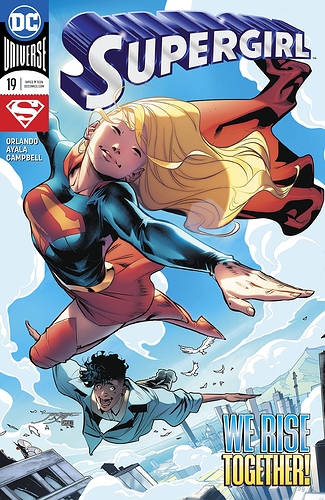 I recently finished Oralndo’s run on Supergirl, Supergirl (2016) 1-20, and I was curious what people thought. I’m not a big Steve Orlando fan, but I got this on my random comic generator system, and I found it worth finishing, so I’m looking for opinions.

It’s mostly uplifting and simple. I appreciate that it seems to be building a bridge to fans of the TV show. Brian Ching’s art style is clear while giving the series a unique slightly whimsical look. Orlando always does a good job of balancing the punching with the character moments. There are always emotional stakes to the action. The crossover with Batgirl landed especially well for me. It was also nice to see Agent Chase again who seems to do little other than hang out as a supporting character in other heroes’ stories ever since getting her own series cancelled. In general, we have competent story telling. Oh, and amongst this mostly light story, they introduced the idea that people in the Phantom Zone can’t be killed but can be melted into a sentient liquid form and forced into a machine to power Kryptonian armor indefinitely which is some really sick body horror that the title glosses over as if it’s of minor interest. Kudos for the weird ickiness, I suppose.

On the bad side, the writing feels a bit bland. Apart from Phantom Zone melting horrors, nothing really surprised me. I guess we also have the reveal that Cyborg Superman is Supergirl’s father, but that’s just off the wall weird, and I have no idea how this is supposed to mesh with the more traditional Cyborg Superman running around in Jurgens’ Action Comics. I’m quite confused. In fact, the story seems to give a middle finger to Supergirl continuity in general. Granted, I’ve barely read New 52 Supergirl, but this doesn’t seem at all connected. In contrast, Orlando tries to create lots of continuity with earlier ideas and characters in his own run, but this usually just caused confusion since I had forgotten about the characters and events he’d established previously. I find the instal-grow family angle they created for Kara to be silly. They try to work the Danvers agents in as parental figures, but Supergirl is assigned to the Danvers as a protection duty by the DEO, so it just feels awkward. Everybody acts like it’s a real parental relationship, but it’s just a job.

That’s all I can say on it. The series is worth reading, but it’s just typical super heroic adventures without anything to make it stand above its contemporaries.

Haven’t read this myself, but I had similar thoughts about what I’ve read of his Wonder Woman stuff. It was, in fact, a story that was told.

I dropped off reading Wonder Woman when Orlando took over. I will say that I thought his one-shot about Wonder Woman continuing to visit a villain in prison was excellent, but then there was that Artemis story line and it was super exposition heavy, and I decided it was time to cut back on spending so I dropped it. Haven’t really given that run a fair shot but I’m sure I’ll be returning to it before too long.

His Justice League of America was just plain bad, and I feel like I’ve read other underwhelming stuff by him.

Yeah, I’d forgotten that oneshot was even him since it was so much better than the Artemis story (which was the last I read, though I assume we’ll be returning to it in the World of Wonder book club). Like, there was something odd about the fact that she decided to be so dedicated about this one villain in particular, but it was well-executed.

But then the Artemis story is rushed, piled high with exposition, and Artemis herself is just an intensely unpleasant person through the whole thing. We don’t get any inkling of why Diana actually considers her a friend other than her just saying so at the beginning and then giving her Superwoman’s lasso at the end.

Somebody must like him. He’s been getting steady work with DC for the last few years.

He did write Batman/Shadow which was quite good.

I think he is alright. DC have better writers for sure, but Steve is better than half of them, so I don’t find it strange that he is still around.

I think his strength is in capturing the characters. I think his weakness is that he doesn’t seem to go back and double check the comics before they are released. It was a while now, but I think I remember being annoyed at small errors and inconsistencies during his run.

I liked Steve Orlando’s tenure on Supergirl. The initial arc is my favorite of his run, but the rest of it is quite entertaining too.

As a fan of the Strange Visitor character from the Triangle Era of Superman, I was quite tickled to see her modern continuity introduction in this run.