When I got into reading about Justice league international(1987) I was really enjoying the book so much that I reread the series again that I noticed there was something I missed on my first reading and never really thought about the first time. 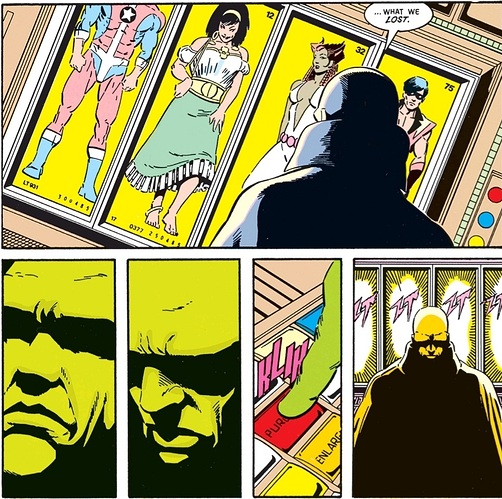 At the time I wasn’t fully aware of the Justice League of America series before international. I just accepted it as something that exist. Morbid curiosity got me to search it up and find out about Gerry Conway’s 1984 Justice league of America that most people dub Justice league Detroit. From what I understand, Gerry Conway wanted to update the Justice league series and desired to appeal to the same crowd of readers from New Titans and legion of superheroes. With the theory, that the Justice League needed to be street-level, focusing on a team of established characters who didn’t have a book at the time, set it in the city of Detroit where we have a new and younger heroes alongside the team.

Thanks to the DC infinite service, I read the run and got a good grasp of what the series is about.
The premise is that Aquaman after leading a small portion of the team in battle against an alien invasion, leaving their space satellite destroyed, he decides as the leader to disband the league and remake it into something new. A team fully committed, able to become a fighting force that has a common purpose. It’s his speech that convinces Elongated man, Zatanna, and Martian Manhunter to join him to create that league, fortunately he finds better luck with new members Vixen and Steel in which one provides the base of operations in Detroit. Other members Vibe and Gypsy finish the roster that create the Detroit team. 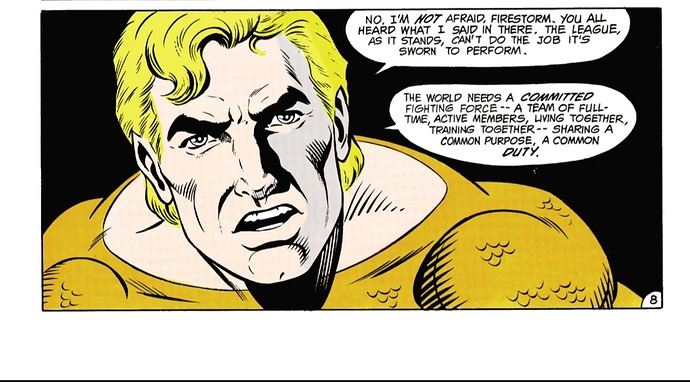 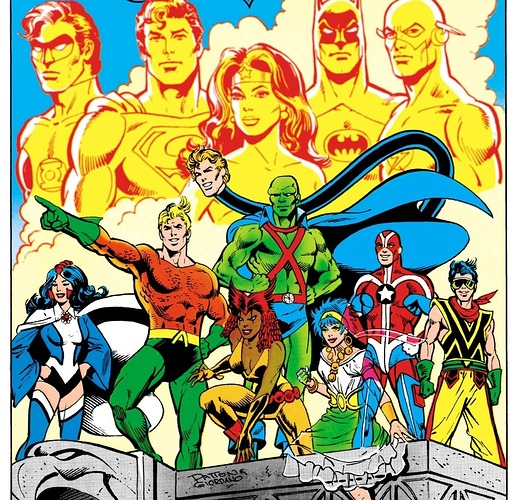 It’s something of an oddity in the DC universe, but I found myself enjoying it. I would agree that it reads less like a justice league book and more like the West coast Avengers, but I maybe enjoyed it for that reason. The book’s focus on a more lived in Justice league team and the fact that one-third of the cast were teenagers gave this era of the team a more familial vibe that doesn’t really exist with other versions of the justice league. While other versions of the league might use the metaphor of family to describe the team’s dynamic. I would argue that only Justice league Detroit era might be the only version of this team that fits that description perfectly. 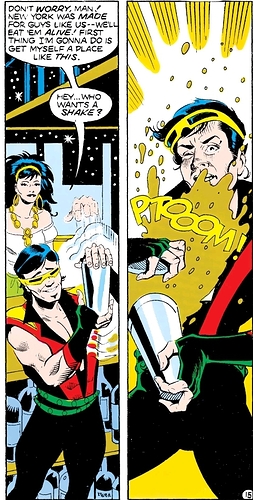 This era is no way my favorite and ain’t a series without some obvious problems, but I don’t think it deserves all the hate it got. I consider it an enjoyable series that is worth revisiting in the future.
That’s my opinion though, really interested to know what other people thought about the Detroit era?

I have a huge soft spot for the Detroit team, have actually been re-reading those issues recently. I wouldn’t say they are particularly good, but it was a bold experiment and a genuine surprise to me as a kid. It’s interesting on re-read to see what a buffoon Aquaman was - dude breaks up the old league, insists on a new full-time team, acts like a horse’s rear end to everyone for a few months, then goes AWOL on a personal mission without informing anyone, then quits. Worst. Leader. Ever.

I appreciate that JL Detroit and JLI gave the Justice League a different role than the traditional A-List Club. It made the eventual return to form during Grant Morrison’s run all the more special, for one, but it was good to use the brand name to highlight more obscure DC heroes (especially during the Detroit era). But the biggest downside is a lack of RoboCop, obviously.

I bought this book at the time. I actually like it more than JLI. I never really cared for Giffen’s humor.

Had I still been reading comics by the time the JLA Detroit came along, it would not have been a good reaction from me. Reading it well after the fact, well it picks up in the second half. It was a well reasoned idea, try to make JLA more like the Teen Titans, Legion and X-Men, who were greatly outselling JLA at the time.

There is one more JLA Detroit story you may have missed @Samsonkillingtime and that is from JLA Classified #22-25 by Steve Englehart. It’s up there with the Amazo story as one of the JLA Detroit’s best for me.

If I had told anyone in 1987 that Vibe, Vixen, Gypsy and Steel would all appear on DC tv shows more than thirty years later, they would have locked me up.

What’s so interesting about the fact that the Detroit team was in the CW Arrowverse is how easily the team itself could easily been adapted into the Arrowverse. It’s not a team with A-listers, Detroit team were street level heroes and and the Justice League hadn’t been introduced in the DCEU yet. A live-action Justice League with Vibe and Gypsy from Flash, Vixen from Arrow, Steel from Legends of Tomorrow, and Martian Manhunter from Supergirl would have been a perfect team pitch to me even on a network like the CW.

I was probably in a similar situation. The first panels you posted (re: “… what we lost…”) was about all I knew about this era for a while. I grew up with Super Friends and Super Powers action figures (and an occasional comic here or there) so I was familiar with the classic team, more or less, and I started heavily reading in the early 1990s so my “who are these guys?” lead me to looking into characters like Guy Gardner, Blue Beetle, Fire and Ice, Crimson Fox, etc., which lead to me reading both the (at that point, current) Jurgens era JLA and digging for back issues of the Giffen/DeMatteis era team, which will always be a favorite of mine.

Eventually though, I delved into this era and I think it had some good ideas, but made a few mistakes. As some people have mentioned, it didn’t feel like THE Justice League at the time. (I mean, many would argue that the JLI didn’t either, but it had a bunch of big guns in it anyway… if you look at the original team it was kind of a who’s who of big guns from all the combined Crisis earths, and while it wasn’t all the big 7, those guys popped up regularly too…)

Since I wasn’t reading it as it was being published, and since there weren’t message boards or twitter or anything at the time, it’s tougher to know exactly what the fan reaction was, but I would think there was probably a bit of “what did they do to the Justice League? this isn’t the team I know!” where a spinoff might not have gotten as negative a reaction?

It definitely provided the writers with the ability to actually write their own characters as opposed to borrowing from the writers on their solo titles, which I can imagine is nice.

There were a few aspects where the characters were kind of stereotypes… but… that wasn’t exactly rare in comics in general from that era and beyond.

I’ll say… I enjoy reading when later writers do “period” stories from this era… and I enjoy reading the original issues now, since as someone mentioned, it seemed to get better over time. But, if I were a JL fan at the time the change happened, would I be missing some of the classic members? Yeah, probably/maybe/possibly…

There’s actually an issue (#238 I think) where Steel quotes verbatim from some of the negative letters DC was receiving and sort-of responds to the criticism. I never got the sense JLDetroit sold very well, but the classic version wasn’t selling then either.

Was it this panel? 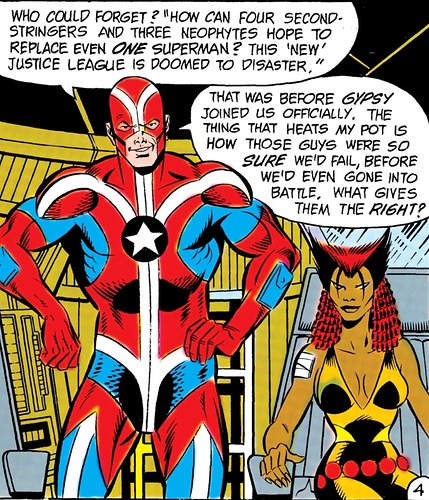 I feel something similar comes up when I read from newsletters about Wally West as the Flash in the 1990s. It something that comes up even in Justice League International #24 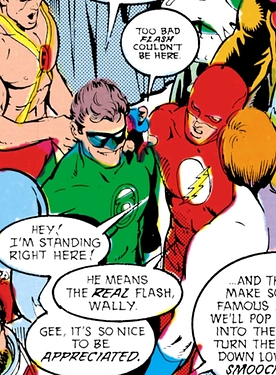 It kinda never changes in any era, so it helps to remember that even in the 80s, Vixen words to Steel ring true even today. 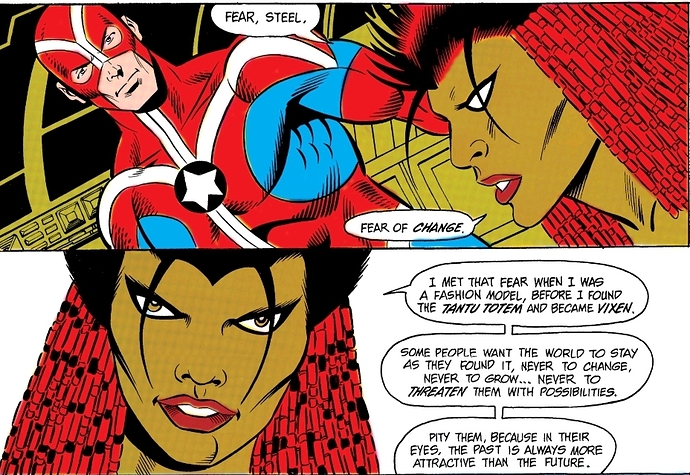