Thoughts and Planning for a Batman Book Club

Hello! With two-thirds of the trinity rocking book clubs, a few people were talking about letting the Masked Manhunter himself get a turn. This came up over in the Wonder Woman club, but I didn’t want to clutter Diana’s topic up with any more Bat-Talk.

Jay_Kay and I both expressed interest in running the club, and it was also suggested that we could alternate. I’d be happy to alternate or just back off and look into starting a Justice League club or some other idea (maybe a Green Lantern club?). And I mean, Batman could probably support two clubs at once, but that would be kind of obnoxious.

So, I figured I’d just put this topic here to hammer out some logistics. As I see it, these are the questions that need to be answered:
WHO’S GONNA RUN IT? Me? Jay_Kay? Both? Or does somebody else want to get together with us and form a Bat-Committee?

WHAT ARE WE GONNA READ? More specifically, what do you all want to read? Personally, if I ran it, I might start with some early Golden Age appearances, then bounce around to some crossovers and story arcs - maybe concentrate on some of the lesser-known ones so I can try to dig up some hidden gems for people. I’d also give some attention to Bat-Family titles not involving the Caped Crusader himself (Robin, Nightwing, Catwoman, etc.). Every couple weeks, I’d try to find a collection of one-, two-, and three-shot stories from a variety of publication eras so that we don’t wear ourselves out on the big stuff.

OTHER ACTIVITIES? The Superman club likes to attach adaptations to the reading, and in the Wonder Woman club we read a recent comic as a bonus alongside the main subject. There’s no shortage of Batman adaptations, of course, but we could also do trivia questions for the aspiring World’s Greatest Detectives among you, or a debate prompt to spice things up.

So, what are everybody else’s thoughts? 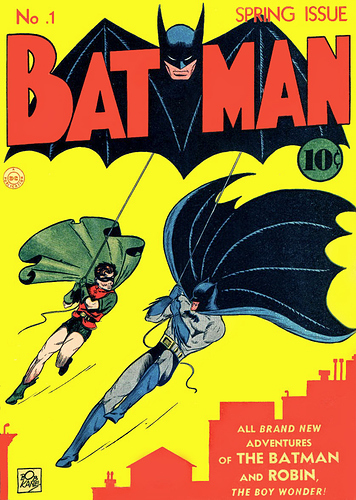 I’m weird, and I love Batman comics but not Batman. I’d be happy to help out with this if you need a third hand, though. I’d love to see this come to fruition.

Also, my suggestion for a good first story would be Robin Dies at Dawn, or issue #156.

Golden Age stuff sounds great – the ones I thought of doing tended to be a little more modern, but also the idea being not exactly the most popular or well known, like I was thinking of books like The Cult, Blind Justice, with a few things newer stuff that’s more related to upcoming releases, like The First Ally for Pennyworth or Harley & Ivy for the Harley Quinn animated series.

I also had an idea of doing a Joker month for October to celebrate the Joaquin Phoenix led Joker movie, featuring stories like Gotham Central’s “Soft Targets” the second arc of Batman Confidential and Going Sane.

BatJamags, hey buddy totally wasn’t trying to steal your thunder or step on your toes with my book club. I had talked with some people on the podcast last night and had discussed doing this one. If you want to take it over or you and Jay_Kay want to alternate weeks till the run gets to 20 or if you want to keep going afterwards thats totally cool.

Ok cool I’m will be super busy come September and really just wanted to focus on these first few stories.

Sounds good to me.

Sounds like the Bat-Committee has just been founded. I’ll put my Bat-Committee Membership Certificate next to my Official HubCityQuestion Cool Guy Seal of Approval.

i’d run it, but would focus more on Runs. Probably starting with Court of the Owls and Snyders Run before looking at core stories of the O Neil Era.

That being said, it seems like you guys have it figured out.

They only colorized the sky

So which one of us is going to get horribly scarred and become a maniacal supervillain?

Well, I work in retail, so I’m literally only one bad day away from insanity…

My only regret is that I was going to call it the Book Club of VENGEANCE!

I wish you all well, I’m trying to figure out how to at least stop by the new Bats club maybe once a month or some such. We live in amazing times y’all!!

Oh, don’t forget to create your own Bat Time Bat Channel on Discord…lol