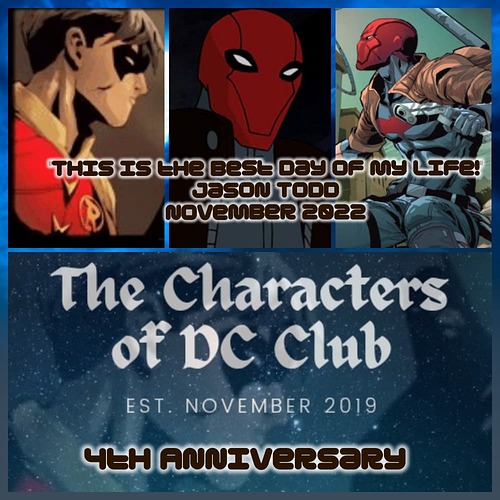 This session marks the beginning of YEAR FOUR for @CharactersOfDC . To celebrate this fact I thought it would be fun to take a look back at C of DC’s very first Character of the Month.

You know him as the Robin who died by the hand of Joker, the Robin who cheated death to return as the Red Hood, the Robin who has proven time and again that there are other ways to fight crime and who is still sometime even an ally of Batman.

I’m talking of course about this guy… 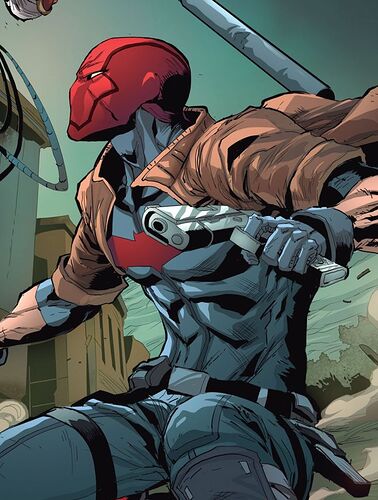 There has been a lot that has gone on with Jason Todd since the OG post was made three years ago so I thought we might take a look at not only the several origin stories behind the character but also maybe a few of the more recent offering that feature him. Hold onto your hats folks this is gonna be one wild ride.

To join the CHARARCTERS OF DC CLUB please hit the link.

As always I will be posting each week what we’ll be reading and discussing beginning on Tuesday November 1st.

For December-March: This club will be on hiatus over the next several months. Hope everyone has a great holiday season. See you next year!

For April 2023: We will be featuring the All Star Squadron!

For this week’s session I though we should start at the very beginning and take a look at the initial origin for Jason Todd. There are a lot of issues in this one folks and at the time Batman and Detective Comics were passing chapters back and forth so the reading order of this starts with Batman #357, then 'Tec 524 and then back to Batman #358 and so forth.

How do you feel about this origin? Is he a knock off Dick Grayson or would there have been enough differences that his character could have grown into something uniquely its own?

How do you feel about this origin? Is he a knock off Dick Grayson or would there have been enough differences that his character could have grown into something uniquely its own?

I generally enjoy this pre-Crisis origin, but I wish that it could have been slightly tweaked so that the Todds weren’t circus acrobats. Like, it’s the 80s, dude. Let them own a local health club or something. You can still keep the “gangsters press them for protection money” angle as a case of history repeating itself, but you have to modernize it somehow.

And I do think he was distinct from Dick–at the time. In our post-Crisis world, much of Jay’s character arc in these early issues has been retroactively given to Dick (and also to Tim, for that matter), so anyone used to reading Grayson origin stories from the last 30 years is going to feel like young Mr. Todd has nothing unique to offer.

I generally enjoy this pre-Crisis origin, but I wish that it could have been slightly tweaked so that the Todds weren’t circus acrobats.

I agree with that. The Todds could have been anything if they were going to use the protection racket angle. They could have also gone the route of having the Todds refuse to use their busines to do dirty work, such as money laundering or the like, for the mob. There are a lot of ways that could have gone.

And I do think he was distinct from Dick–at the time.

At the time I wasn’t so sure he was since he seemed to be a bit of a carbon copy of Dick on the surface but he did become more distinct the more issues passed. Years and several re-readings later I came to appreciate this version more. I’ve always wondered what he would have turned out like if COIE had not happened. What would his new hero name have been after his time as Robin had passed? Would he have been known for some great accomplishment as Robin? Would he have had his own Teen Titans team?

And here is our second post of the month. At this point in time DC has revamped their universe and a lot of things changed including the previous origin for Jason Todd. This session we will take a look at this new origin and see what changed.

DC decided to go with a more street savvy origin for Jason here. What would you have done of you had been tasked with reinventing the character at this point?

What would you have done of you had been tasked with reinventing the character at this point?

Even if I revamped his origin in this general direction, I’d still keep Killer Croc as the man who killed his father. Also, I would keep most of the pre-Crisis storylines more-or-less intact (such as the Nocturna stories), so there would be a time jump between issue 409 and issue 410 to leave room for those stories. And Dick would quit voluntarily, just as he did before the Crisis.

Yes, folks we have had a time skip from last week’s session. Decades after Jason Todd was put in the grave by the Joker (and a phone vote) he was resurrected and took on a former alias of the man who killed him looking for a bit of revenge on both Joker and Batman. This story covers many issues and was made into a pretty good animated film. We will be taking a look at the beginning of that story this session.

Jason Todd was the first comic book character that I can remember being resurrected, although these days that sort of event is a dime a dozen. How do you feel.about Jason being resurrected?

And yet another time skip this time to the DC Rebirth era. At this point Jason has been a part of his own team for awhile and his relationship with Bruce is a bit less strained. He’s even been known to help the Bat Fam. out once in awhile. In this week’s session we will delve into the second incarnation of the Outlaws team and how they came to be together. Also on the table are some information on what Jaybird has been up to of late.

Jason has also been seen around the DCU helping out in various ways. From Death Metal to Dark Crisis and Task Force Z to Future State he’s been a busy man.

My two favorite comics he’s been appearing in lately though have been Batman: Wayne Family Adventures and Red Hood: Outlaws available on Webtoons. Both of them are very different types of stories and I believe both are also vetted by DC. I’ve been enjoying both.

Just a reminder: This club will be on hiatus until April 2023 when we will be taking a look at one of my favorite teams: The All Star Squadron. Hope everyone has a great holiday season!

As someone who took a book club on a tour through his Outlaws days, I can say with certainty that if he is to be on a team, I’d prefer it to not be the Outlaws.

(I’m not in a RR thread right now, so I feel more comfortable talking about how much I disliked that series…)