I am a firm believer that DC needs to double up on their Weekly comic uploads. I have made a few posts about comics that should be uploaded, unfinished series, etc etc. It has now come to my attention that Captain Comet has fallen beneath the radar! His Strange Adventures series from 2009 is amazing! We have Rann-Thanagar Holy War featuring Captain Comet but that’s just not enough! The Man is a HERO for Heaven’s sake! For more missing comics please look towards my other posts. Thank you, and God Speed!

I’ve always been curious about Captain Comet, although I’ve never read any of his solo stories (only random guest appearances). I find it interesting that he was introduced during the gap between the Golden Age and the Silver Age, when superhero comics fell out of favor and were replaced with science fiction, horror and romance books (sometimes called the Atomic Age). Captain Comet wasn’t a superhero per se, but he has a lot of the trappings (powers, costume, etc.).

I would love to see a “space” anthology featuring Captain Comet, Adam Strange, Space Ranger, Starfire ('70s version), the Star Hunters, etc. I only know of these characters, so I would like to see them in current stories. 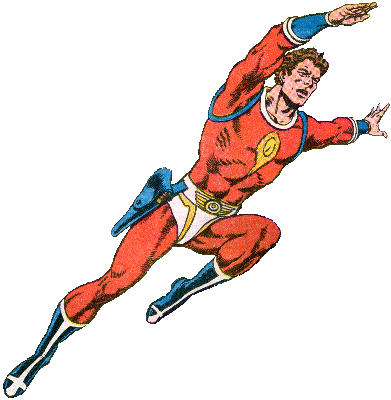 Have you made a request in the “Print to Digital” thread over in the Suggestion Box section. That will at least put it on the radar of the archives & digital scanning staff at DC.

Please realize that material that was never digitized is not a simple process to get it into high quality digital form, especially if restoration is needed.

I’d love to see that volume of Strange Adventures in digital, as it was a fun read.

Shane Davis was on art too, and any book with his artwork is always worth a look.

I believe I have, I have posted there a few times, asking for a couple missing issues of the 2001 Doom Patrol run (issues 21 & 22), and Day of Judgement as well.

@Outside2Infinity: You are onto something with your space anthology idea. Take the heroes you mentioned and put them together into a Justice League Cosmic ongoing (Justice League Odyssey is going nowhere). Throw in a hepping-helping of the Khunds,
Dominators, Coulans, Controllers, Durlans, Rannians, Daxamites, Thanagarian, Gordanians, and Tamaraneans and we have ourselves a slobberknocker of a Syfy/space opera book.

Would love to see the return of Captain Comet. I became a fan of the good Captain during his run in The Secret Society of Super Villains-one of my all time favorite series.