The Real-Life Monsters and Men of the Low, Low Woods 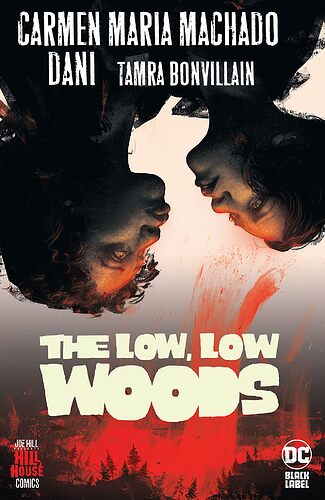 The Low, Low Woods is a horror story in two regards. There are monsters: skinless men and half-women, half-deer creatures. Then there are monsters: men who abuse women, over and over again, within a system that protects and enables them. Like the best horror, the two are entwined, one the cause of the other. At its core, however, The Low, Low Woods is a story about the enduring friendship between two teenage girls.

Our protagonists are Octavia, otherwise known as “Vee,” and Eldora, who goes by “El.” They’ve been best friends since encountering a monster in the woods together. Both are narrators, and the lettering is different depending on whose head we’re in. Vee writes in a loopy almost cursive, El with sharp angles.

The girls live in Shudder-to-Think, a small, strange Pennsylvania town full of mysteries that only become more disturbing, more heart-wrenching, as the girls investigate them. It starts with something the girls can’t remember—they seemingly fall asleep while watching a movie at the local theater, but El doesn’t buy it. She thinks something sinister is afoot, even if Vee would prefer to ignore it. Vee is more focused on secret rendezvous with her girlfriend and applying to college so she can leave Shudder-to-Think.

Soon, however, that single mystery snowballs into something the girls can’t brush aside…

To learn more about the world of The Low, Low Woods and its real life counterpart, head on over to DC Comics!

You can head over to the House of Horror club to discuss The Low, Low Woods in more detail with some avid horror fans!

What do you think of The Low, Low Woods? Let us know in the comments!