The Only Scene They REALLY Butchered in Batman: Hush...

…Was the scene with Joker in the alleyway.

The setup was fine. Batman runs into the alley to see his friend dead, and the Joker standing over his body. Batman then proceeds to lose it and come within a few seconds of killing the Joker. The animation was excellent as well, capturing Batman’s fury perfectly.

The first issue with that scene that causes it to lose so much of the impact it had in the comic was Gordon’s characterization. In the comic, Gordon actually grazes Batman with a bullet or two before reminding Bruce of his “role models” and “the beliefs they instilled in [him].” The brilliance of this line is the implication Gordon knows Batman’s identity, and is only willing to use that knowledge to save Batman from doing something he will regret forever.

It also messes up Batman’s reaction. For nearly the entire issue, we get Batman at his most pissed off, throwing aside Harley and Catwoman just to get to the Joker, beating the Joker within an inch of his life… and then in contrast acting so vulnerable and grief-stricken when Gordon convinces him to stop. In the film, Batman seems to revert to his usually stoic demeanor the moment Gordon gets him to lay off Joker.

And finally, it cuts out this masterpiece of a quote, and one of the best moments of Gordon and Batman’s relationship.

BATMAN: How many more lives are going to let him ruin?

GORDON: I don’t care. I won’t let him ruin yours.

Overall, I really enjoyed the hell out of this movie. The changes they made were mostly to serve the story, and there were some downright brilliant twists in some spots. But this particular scene did not get the treatment it deserved. 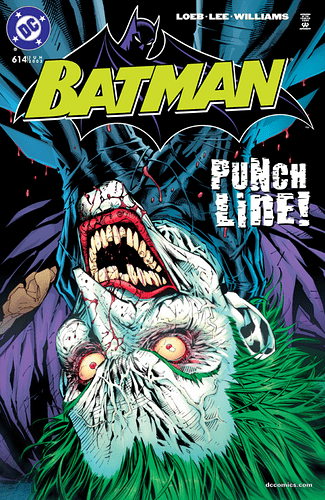 A voice-over of Batman thinking of the ways he could kill Joker (as he did in #614) would’ve been a nice addition to the scene.

I liked it as it was, but that added piece of dialogue from Gordon would’ve been nice too.

You’re not wrong. Those moments would have added a lot to the scene.

For me the weakest scene in the movie was an added scene. The breakfast scene with Bruce and Selina was so bad and Selina felt really out of character, as did her voice performance.

Still loved the movie. Definitely the best film in this animated continuity, at least IMO.

You know I didn’t even think about it till reading this. I liked it and thought it was done ok but some of the flash back panels of babs and jason would have been nice.

In all fairness, I don’t think Babs was paralyzed or Jason exists in this universe.

The worst scene for me is Catwoman/Nightwing graveyard scene.
They turn Nightwing into bumbling, stumbling, idiot who gets easily surprised and dominated by the villain.
Either the Directors or writers…or both are completely STUPID when it comes to character integrity…the only thing worse than being that creatively stupid is being that stupid and having no imagination at keeping character integrity intact. Or maybe they are not stupid at all, and they just simply and secretly hate the character. Or even worse…maybe their WOKE.

The scene they really botched was Tommy’s funeral. Whitman’s poem that appeared in Batman #615 is in the public domain. The classic King James translation of Matthew 6.19-23 (the verses quoted in the movie) is in the public domain (in the United States, at least), as are some other translations. Who decided, “Nope, we gotta get permission from Tyndale House for the New Living Translation”? I could understand if they went with some translation owned by AT&T (the current owners of DC and WB) as a shameless bit of corporate synergy, but this choice is just odd. (Maybe it was a nod to the publisher for releasing the book “God on the Streets of Gotham.” I dunno.) I’m just wondering if they had to pay for it in addition to getting the clearance to use it. Why go to all the effort?

Granted, I may be the only person who had this reaction.

The funeral scene just didn’t really have any impact in the movie because Tommy didn’t really have any character development in the movie. He gets drinks, fixes Bruce’s head, then ends up dead.
In the comic there were all those flashback scenes and it was explained that Bruce never really mentioned this childhood friend before because he didn’t like to talk about that time in his life and like many people, he just lost touch with his friend because their lives went separate ways.

As for the Joker scene, I agree that Gordon talking Batman down was also handled better in the comic. I loved that bit of dialogue and how Batman is shaken up afterwards because of how close he came to crossing that line.

I never read Hush, and from my viewpoint they hadn’t sold Bruce’s friendship with Tommy enough in the movie. It felt like a rando that he had drinks with at a party and knew casually at best. So when Batman started beating the crap out of the Joker it felt horribly out of a place. I assume that this scene would have felt very impactful if I had read the comic. The movie didn’t do that for me.