Hello @ObscurityofDCClub and other members of the DC Community. Welcome to week eight of Obscurity of DC’s Obscure Book Club. This week will be a continuation of week seven, in which we will finish… 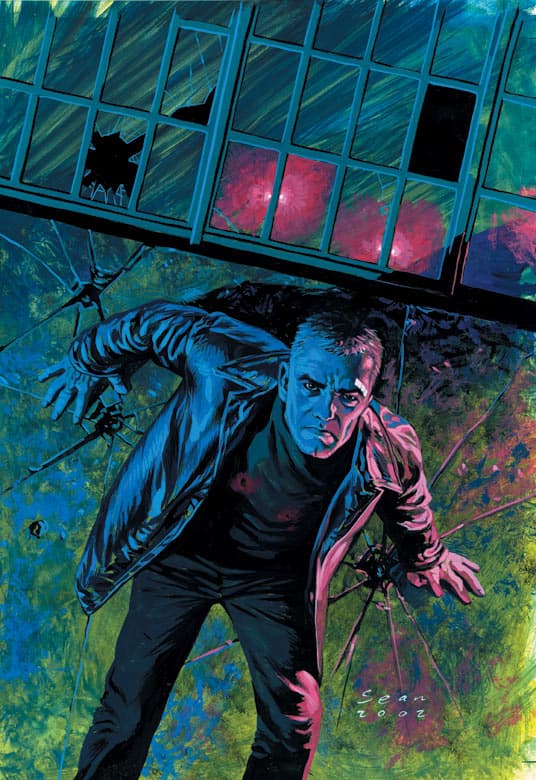 Last week we learned several things about Holden Carver. He’s in a relationship with Miss Misery. He’s one of the four right-hand men to Tao, a very dangerous villain. Oh, and he’s a super-spy, that is trying to take down Tao’s organization. We also learned that, because of the alien artifact, The Bleed, Holden can transfer his pain to any other living thing.

Now that that short recap is over with, here are some discussion questions:

I wholeheartedly despise Lynch for what he did to Holden and Veronica. It was not right, it can’t be justified, and they both should have known what they were signing up for.

I think this will throw off Holden’s game. Now he has to actually report stuff which will be much more difficult. Also, Holden doesn’t like Lynch, so it could put him in a bad mood, which could get him killed.

I think he’s telling the truth. Tao’s reasons make sense, but the way he’s going about solving his problems is completely wrong IMO.

I don’t think the food Holden is doing outweighs the bad. I don’t think any crimes he committed could genuinely be justified, even if it was intended to be good.

It’s definitely messed up, especially the way that Lynch lied about the file, but we can’t really put it all on Lynch – Holden was convinced that it was the right thing to do and wanted to serve his country. Veronica definitely got burned pretty hard from it, though, and Holden is just as much to blame as Lynch.

Like you said, it’s going to make it harder for Holden because now he’s seemingly going to be expected to actually do the double agent thing and work against The Syndicate.

It’s understandable – he was created as something different, some might say “better” variety of human, raised completely outside society’s rules and expectations. His power and genetics makes him capable of doing things that people can only imagine.

I think that’s definitely his truth, and I can see why he would be sick of the world and the institutions running it. That said, he doesn’t seem to be that much better in terms of morality. Or, to put simply:

In the micro sense, perhaps. The way he saved Veronica’s husband shows that there is still a sense of empathy on his part. But, considering how long he’s been in the organization and just playing the part, without Lynch’s reports, is he really that much different from any other of Tao’s enforcers? Even with the reports, if/when Lynch finally has enough to take the syndicat down, will Holden be able to say that he did a net good to the world with all the blood on his hands?

I don’t think he’s officially called “sleeper” in this. That’s just the name of the book, not his code name. That said, I guess you could say it fits him in the sense that’s what he is. He’s not really making decisions for himself. He follows orders in IO, including becoming a double agent. He follows orders when he’s working with the Syndicate. He follows orders as the double agent until there’s no one there to follow orders with. He sees what he did with IO and what he does with the Syndicate to be not that much different in practice – hurting and killing the people ordered by his superiors.

I don’t think he’s officially called “sleeper” in this.

There is Sleeper: Season 2 on DCUI, in which they call him Sleeper once or twice

Speaking of, hope we get to cover season two at some point.

I was going to, but I decided against it. The goal of this club is to shine light on the lesser-known characters/storylines, and I don’t think it would help our goal to have 2 more weeks set aside for more Sleeper, when we could focus on other obscure parts of DC.

We also learned that, because of the alien artifact, The Bleed, Holden can transfer his pain to any other living thing.

Pendantry: the artifact is from the Bleed. Not the Bleed itself.

Right? Oh, of course not. He even has a line along the lines of “I know I’m a bastard.” Lynch is not a good person, but being a spy in a relationship isn’t a great life choice either. I think there’s a Holden monologue box indicating that he knew what he signed up for, but still feels he fell for Lynch’s con.

I’m assuming it won’t directly affect it. Tao laid out a completely logical explanation to stay, and Holden’s monologue told us that he was buying it - he never had friends in IO, but he actually cares about the people in The Syndicate, even if Tao is insane and his mission is irrelevant. I suspect Season Two will have at least one face to face between Holden and Lynch, but I’d venture it doesn’t change his loyalty. Holden might deliver the intel he was inserted to obtain, because IO knowing that won’t change anything, but he’s not going to go back. He was always way faster to tantrums with Lynch in the flashbacks than he ever was with Tao.

I mean, they align with the “truth” as we know it in the greater Wildstorm universe, right? I don’t see why he’d lie here. His logic is his weapon, so laying out the truth at the right moment is 100% part of his strategy. He wants Holden to make the only choice left to him, not trick him in to making the choice he wants.

Sure I “understand” his reasons. They are completely rational for the “machine logic” trope. (With a side of “intelligence equals isolation”.) To save humanity he must destroy all humans, right? Makes perfect sense.

No, of course not. Lynch is wrong. Tao is wrong. Both are working to “improve the world” under their own vision; one a jingoist loyalist and one a disillusioned anarchist. But the “human” side of the conflict puts national interests above human interests, and the “logical” side sees humans as the problem. So in the end, neither can improve things for humans. Which is the point. Either way, he’s doing awful things. Tao’s point about the “heroes” treating the symptom not the disease is completely valid. But he doesn’t have any better a solution. At least with Tao, Holden feels he has human relationships. It’s an untenable situation, which is what makes it such an interesting story.

He’s never called Sleeper. It’s the name of the story. Because he’s a sleeper agent.
He’s called Conductor because he can conduct pain like it was electricity. (He should really be called Capacitor, though, because he can actually store the pain for a while before passing it on, and doesn’t need to be touching his target when he receives the pain.)

Love Sleeper. Always thought it would make for a great HBO show!

It would! I think a cool idea would be to have a show where Hitman, Sleeper, and Kev Hawkins all team up!