[image] The latest adventures of the World’s Finest launched this week, courtesy of writer Mark Waid and artist Dan Mora (you can discuss the series here), but as we all know, the World’s Finest team of Superman and Batman are no strangers to media outside the comics. Whether you’ve seen it 1,941 times or this is your first, join in the fun of seeing the very first DC Animated Universe team-up of the World’s Finest heroes (which some say is their all-time best on-screen team-up) this coming S…

Superman soars into adventure in the Infinite Frontier

As you enjoy a day of fun and frivolity, how about something new and fresh from the world of Superman that you can compactly, quickly and oh-so easily read, whilst planning your next AFD prank? Dark Nights: Death Metal and Future State have come and gone, and where does that leave the Superman franchise? You can find out by reading the two-part tale “The Golden Age” in these spiffy books: Also, be s…

You know her, you love her, its Kara Zor-L of Earth-2, aka Supergirl, aka Power Girl!

Your positively powerful mission this week is to read issues 1-3 from this groovy series: Written by Jimmy Palmiotti and Amanda Conner (and long before they revolutionized Harley Quinn during The New 52, to boot!

), Power Girl is a triumphantly fun read. If you’re read it before, read it ag…

Superman and Wonder Woman: In Love?

), what better time than now to talk about two of its stalwart heroes, Superman and Wonder Woman, and when they were in

? You can catch the first New 52 smooch between the two here:

Then, mosey over and read issues 1-6…

[image] General Zod has joined the Rebirth-era Suicide Squad and everything goes according to plan. Or does it, @ModernAgeSupermanClub? Not if Cyborg Superman and the Eradicator have their way! Lock and load for some fun Squadies, and as only a Suicide Squad led by a deranged Kryptonian can deliver it, by checking out these rad reads: Jot your thoughts about these books down below, and as always: [image]

[image] Greetings, @ModernAgeSupermanClub! To celebrate the life of legendary artist Neal Adams, we’ll be taking a look at the following: The above are by no means the only Superman-related comics by Neal Adams in our fabulous library. However, they are among some of what turned out to be his last modern work with The Man of Steel. Read and discuss the above selections, and…please feel free to highlight other Super-favorites of yours by Mr. Adams (be they in our library or otherwise) do…

25 Years of the Blue and White!

The Modern Age Superman Club: Celebrating 25 Years of the Blue and White

[image] Greetings and Happy Friday @ModernAgeSupermanClub, and all other fans of high-flying, superheroic fashion! Whether you liked or loathed it in 1997 or in the years since, 2022 is the 25th anniversary of the controversial costume change that outdid nearly all other controversial costume changes in the 1990s: Superman Blue! Celebrate a quarter century of the adventure that led to this change in Earth’s Greatest Hero’s attire by checking out the 5-part adventure below: …

[image] After this highly-entertaining adventure @ModernAgeSupermanClub, you’re likely finding yourself hungry for even more blue and white suit adventure! If so, I’ve got your fix right here!

Celebrating Pride Month with Superman and The Authority!

, @ModernAgeSupermanClub! We’re celebrating Pride Month with Grant Morrison’s latest adventure to star The Man of Steel, Superman and The Authority! What happens when The Multiverse’s Greatest Hero teams with The Authority (one of the greatest bands of ass-kickers in pop culture, be it in comics or otherwise)? Check out this

thrilling adventure to find out! Chit-chat to crack a skull by, Authority-style:

The Pride Month Celebration Continues with the Jon Kent Superman!

[image] Happy Pride Month once more, @ModernAgeSupermanClub! Our main Pride Month read is here, and it stars the Superman of the 21st century, Jon Kent!

Read: All of the issues in this heroic series (don’t worry, its only 5 books

Discuss: This series is notable for starring the first openly bisexual member of the House of El. What are your thoughts on how Jon Kent carries pride in his tenure as Superman? Has this Superman inspired you or someone you kno…

Honoring Tim Sale, A Super Artist for All Time

[image] Greetings, @ModernAgeSupermanClub! Last week’s passing of acclaimed artist Tim Sale was the latest Artist’s Artist we’ve had to say goodbye all too early to this year. Like Neal Adams and George Perez before him, Sale worked his magic on many a famous comic character, but his magic shined especially bright when it came to The Man of Steel himself, Superman. To honor Mr. Sale’s legacy with The Man of Steel, you can take your pick of the following reads:

Check it out @ModernAgeSupermanClub, Jon Kent’s first starring role in outside media!

So much fun animated stuff for DC fans! I’m legit excited for the LoSH series on HBO.

In the scene where Jon and Damian are about to face-off against the League, I noticed two things:

The Cassandra Sandsmark Wonder Girl was wearing her brown jacket.

AFAIK offhand, Cass hasn’t yet worn that in animation. “Its a nice coat.”

Beast Boy! Its about time Gar joined the League!

I’m legit excited for the LoSH series on HBO.

Why isn’t that ringing a bell with me? Is it something that was recently announced? 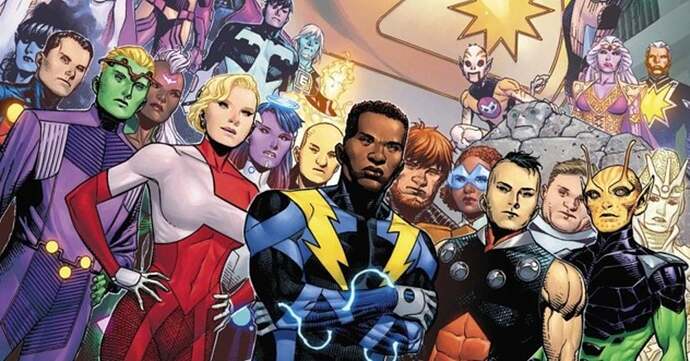 Legion of Super-Heroes is getting an animated series and the rating for the show was revealed in [...]

Gee-whiz and hot dog, Wally! That’s news to me. I hope it gets a full-blown toy line and an accompanying tie-in comic.

SN: That article should say the Legion is getting a new animated series, because they’ve already had one.

I was confused for a moment too. I was like “is this just the 00’s series coming to HBO?”

SN: Gonna be seriously disappointed if there’s no Wildfire. He’s my fav!

That show was announced at the end of last year, and I feel like a goober for just now hearing about it.

I liked Bendis’ Legion, so a TV series that uses his run as a starting point is most welcome.

Gonna be seriously disappointed if there’s no Wildfire. He’s my fav!

Dawnstar being a featured player in the show would be nice as well.

See? He got something right with that book, after all.

I wonder…if Jon is in the show, will he be involved with Saturn Girl and…will his bisexuality come up in some way?

I know that came about after Bendis’ Legion ended, but the show could be a viable entry point for Jon, as well as his sexuality, should that feature in stories in an organic fashion.