The Loose Canon Discussion: The New Frontier by Darwyn Cooke 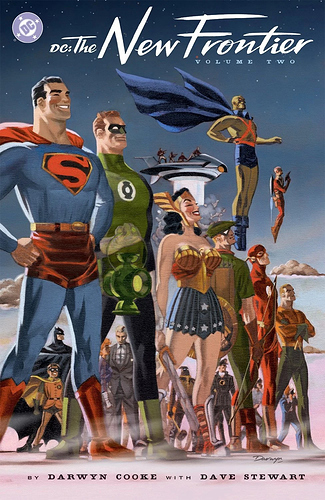 image976×1500 1.15 MB
Howdy y’all and welcome to the next installment of a Loose Canon Discussion! These discussions will focus primarily on self contained stories in the DC world (with a few exceptions now and then). For the busy and the slackers

. Every installment will give you a minimum of 2 weeks to tackle the story at hand and of course you can jump in whenever you finish.

As we make our way into 2020, we say goodbye to the old and head towards a New Frontier with our beloved DC heroes with this classic story written and illustrated by the late and great Darwyn Cooke. A group of Losers are sent to rescue a German scientist on a mysterious Island following the end of the second world war. Soon the Government will declared a war on Vigilantes. The JSA will be disbanded, a hero will fall to their death, and Superman & Wonder Woman will agreed to work for the Government. The Batman of Gotham will be labeled a criminal whom Superman has failed to bring in, the suicide squad is now the task force X, and the threat of Communism will reach an all time high following the end of the Korean War. This is were our story begins as the Centre nears. Join your favorite DC heroes as they usher in a new frontier.

Link to comic below
Comic link

And of course, share any other thoughts you have on the story.

Thanks, I hope y’all enjoy the story and have a great Christmas and New Year’s y’all!

It’s been too long since I’ve seen the movie to comment on it, but I do love you this series. I like that it doesn’t hide the wrinkles of everything that was going on in America in the in the late 50’s. Even Cook’s take on these heroes show them with flaws which certainly wasn’t how they were portrayed in that era, and that makes for a great, nuanced epic.

Reading this again was a bit bittersweet, though, knowing we will never get any new works from Darwyn Cook.

It is my candidate for best comic book.series

As for the movie

Issue 1 set on.Dinosaur Island had to go.to tell one story and cut the run time. Some readers find it hard to get into issue one because it is so different from.the test of the series. Only thing remaining is final battle with the T Rex

Batman is more in.the movie including being part of the attack team on.the Island.

What both works share
The Golden Age older Superman Wonder Woman.and Batman are in. it while the rest are beginning their Silver Age careers.
Since the story is set in 1950s to before 1963. The Golden Age characters are in their early forties and can still be in condition as heroes. Also a slight generational conflict occurs as the newer heroes did not experience the Depression and World War II.

Superman and Wonder Woman as operatives for the government reminds me of Dr Manhattan and the Comedian n. Vietnam ss well as the conflicts between the pair.

We get the origins of Martian Manhunter and Green Latern plus early.Flash.

The space race and cold war is clearly shown.here including the paranoia and fear that generated.

Art and story complement each other.

I love the full page panel of everybody walking together before the final conflict. It shows every is needed.and working together
Including the military intelligence agents scientists including a pre Atom Ray Palmer.and Costumed Heroes, aliens and humans alike.

Howdy! Yeah I love this story and know what you mean with the "bittersweet"ness of it. I love Cooke’s work and whenever I go back and read some, I am filled with sorrow because we will never get another story by him.

This just in: The New Frontier is the leading candidate for best DC series!

I feel they did a good job at adapting this for a movie and hit all the right focus points. If I would change anything it would be to have the Challengers of the Unknown be more prominent in the movie. Also maybe give us some stuff about The Losers and how it is relevant to Hal would have helped a little.