I just finished watching Part 1 and thought I’d start a thread.
First, The Long Halloween is my favorite Batman story of all time so I have mixed feelings about an adaptation and am probably overly critical.
So, what did I think of it? Like the Hush movie, it’s heavily altered from the source material so it’s almost hard to rate it because it’s hard for me to separate what an adaptation could’ve been from what we got. I would say what they produced is mediocre at best.
The good: the animation. It would have been very tough to copy Sale’s style so I can understand why they didn’t try even though the art is a huge part of the comic.
The not good: the story. I’m pretty annoyed with the wild deviations from the source material. I know a lot of people like changes to keep things fresh but I haven’t enjoyed it so far (I’m looking at you Hush). I also thought the character writing was pretty amateur. The attempts at getting into the psyche of characters were cliche. There were too many lame Godfather references too. I also didn’t care for the multiple references to Bruce being a bad detective. I know it’s early in his career but still.
Also, I don’t know why these DC movies insist on throwing in curse words. I’m not against cursing but it always comes across as a kid swearing to be edgy.
Finally, Mark Hamill should sue Troy Baker for the complete rip-off of his Joker voice.
But the greatest offense is the omission of the best line from the comic. “Not as hot as the night Johnny Viti got married”.

Maybe Part 2 will play better since from here on out it’s The Long Halloween in name only.

There were too many lame Godfather references too.

Um, that was a serious problem with the original comic. In fact, I feel comfortable in saying that Loeb crossed the line between homage and plagiarism.

I guess they went over my head in the comic or just slipped my memory. In any medium when a crime boss says “I made him an offer” it instantly takes me out of the story.

I get into it here:

The opening line, for instance, is a reworking of the first words from The Godfather: “I believe in America.”

Can you please the spoilers behind a spoiler blur? Also, how did you manage to watch it already when it doesn’t come out until tomorrow? Unless this is all just a troll or something. I didn’t actually read any of the text for fear of spoilers 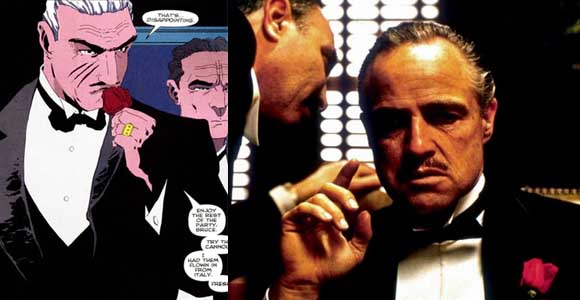 It should also be noted that rarely these animated movies are direct adaptations of the comic. There’s always going to be changes.

In the case of Hush I didn’t mind their take as I felt the reveal in the comic was lazy.

Unless this is all just a troll or something

Crap, the jig is up. I paid for a subscription, created an account, and posted here for years so one day just in case they made a Long Halloween movie I could say I didn’t really like it. It’s the long con.
Or I got to see a digital copy.

I looked it over and I don’t actually list spoilers just the general idea they made changes. I think when I titled it that I anticipated spoilers.

Or I got to see a digital copy.

Right, but how did you get a digital copy before it actually came out today?

I’m clearly from the future. Either believe me or believe this is an elaborate ruse. That’s up to you.

Just saw it and I enjoyed it. I see the differences and similarities with it form the comics but I’m normally don’t mind whether it’s similar or not.

The voices are great the animation as with the other movies in this universe is cool.

The story I like how they set it up without telling you the date until the kill. The fights were fun and the mystery tone fit. I enjoyed the bashes at bats for his detective skills gave me a good chuckle

Liked the Bat Cat moments. That’s silent case was cool. The Gordon family scenes are nice. And little Babs at the start was adorable. And James there too.

And Bakers Joker is always a blast. (Funny thing back when he first did it, at least I think it was his first, in Arkham Origins I thought he was Hamel for the longest time​

. Gues it was his job to sound like him being in the Arkhamverse and all but he did a nice job. But once I found out the difference of his having a higher pitch it was easy to tell. end of tangent

Overall I’ve been enjoying watching with the family as they try to guess who the killer is and since I’m the only one who read it they’re asking me and I’m telling them who knows they might change it and then they say who it is and then say no. Having fun with that

For me, the Joker voice is just too close to Hamill and it’s like “do your own thing”. Especially in a new property.
In Part 2 you might be on the same playing field with your family when it comes to guessing the killer. I think they will go with Harvey and Gilda because they have been tela novella style subtle about Gilda’s state of mind. The mask killer looks male to me but that doesn’t lock it in. I think Alberto’s fate in this was pretty definitive but in the world of superhero logic they could probably say he just lost a limb or something.

Well, what made this for me isSelina Knows bruce Wayne is batman and mixed it with New Earths Selina is the Roman’s daughter. It never made sense to me that Catwoman greatest thief on the planet never knew who batman was till he told her, but Silver saint cloud can figure it out. I can understand it in the golden age but the modern age comes on. I am also hoping at the end of part two we get Cat-tales over the main cannon however it would be really fun if we got The Nail. cause batman deserves to be happy. I would say Alberto is dead, but it’s both Harvey and Dula who are Holiday, and Dula is the woman who Alberto wanted to marry
PS: i love that we finally have Catwoman hiss in one of the movies.

Just saw part 2.
Really liked it. Great performances fro the cast. Really like the quiet moments. Nice action all around.

The Grundy and Two-face scene was fun. Gave me a good chuckle.

. Her design was cool and the extent of her powers were great. Also liked the scenery in her and Bruce’s visions.

They brightened up the ending a bit witch was cool. Fit with this universes. And the post credit. A nice JL tease as that seems to be what they are building up to.

I plan on starting an overall discussion for both parts one and two once the blue-ray has been out. although i too like what you described. however Bruce and selina were still dating at the end of the original book, it’s not till dark victory that they break up. I liked ivy’s design it’s a nice mix of classic ivy, the sale design, and a bit of New 52 in the texture.l