The Future of One Harley Quinn :harley_thinkhqtas:

A little over two weeks ago artist, Frank Cho, posted an image and a brief summary about how DC is canceling Harley Quinn after issue #75 and it’ll be the final variant he’ll get to do for this series (you can check out his post here: [https://www.instagram.com/p/CAf0MZKn-2K/?utm_source=ig_web_copy_link]). I regret reading this because I’ve been thinking about it nearly every day asking myself the same questions:

I think the last question is a little extreme but I guess anything could happen. I consider myself to be pretty new to the comic scene (actively reading and collecting since Rebirth kicked off) and I’ve only recently been discovering how much fun Harley Quinn is to read and I also really enjoy Frank Cho’s artwork but what are everyone else’s thoughts?

I apologize if this question was already covered elsewhere but this is my first topic.

Speculation can be horrible. Especially for a character you really connect with, I felt something similar when Flash was killed off in Crisis in Infinite Earths. Back then I don’t recall knowing about that ahead of time until you saw the cover (pre-internet ya know). I felt the “What now?” Fortunately, Wally West was there and kept the Flash legacy alive. I haven’t searched but I haven’t seen any news about any future plans for the character outside of potential appearances in other titles. Does it have anything to do with the recent Diamond news? No idea. I have no idea of her sales records either.

I honestly don’t see her being rebooted. It might be a a simple sabbatical with a strong return. I’m not entirely sure but I don’t see Punchline sticking around. Not that I wouldn’t mind. She seems like an interesting character with an interesting design but is she too similar to Harley in regards to the relationship she has with the Joker? Is there perhaps a story where Punchline becomes too much for Joker and he seeks out help with Harley Quinn?

Interesting questions all around and hopefully something exiting will be the answer.

Maybe a Birds of Prey ongoing with her on it or a new series? I’m sure DC won’t be dropping her anytime soon. Birds of Prey (the movie) did well and Harley is already being thought about for more movies (Gotham City Sirens).

Maybe DC is doing something similar to what they did with Flash in Crisis on Infinite Earth? Maybe not killing her off per say for 20+ years but taking her in a new direction - hopefully being a hero - and they just don’t anything to be leaked? But at the same time I’m happy not knowing to a point because where’s the excitement in knowing what’s going to happen before it happens?

It seems like Punchline is getting a lot of attention and it would be nice to see someone new step into the role of being known as “Joker’s girlfriend” and let Harley develop into her own character. Either way I’m sure DC will get it right.

I think you’re right in that DC won’t be dropping her but it just brings up a lot of uncertainty with them dropping her series out of the blue. Harley has a multitude of personalities and I just can’t see where the creative writers would struggle to keep the series ongoing. Her animated series seems to be doing pretty well and I feel good about a season 3 in the future. I think I’m just more upset I won’t be able to grab any more variant covers by Frank Cho for an extended time.

FWIW, there is now a weekly Harley as part of the DC Digital First series. 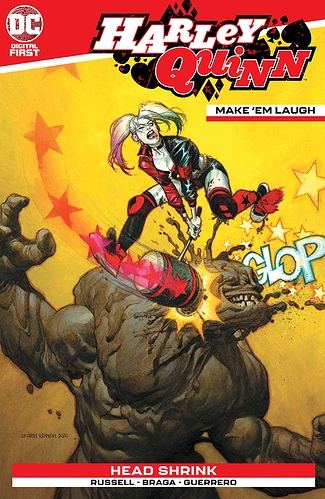 Harley is too much of a cash cow for DC (and I say this in the most loving way) to keep her out of the spotlight for long. That doesn’t necessarily mean she’ll immediately get a new solo series, though. Maybe she’ll lead a team or mini and make cameos in other series (she’s already scheduled to appear in Death Metal) before getting rebooted. That said, I do hope she gets another series. I’ve followed her book for years and can’t believe she’s getting cancelled.

Don’t think of it as a cancelation, it’s just a renumbering. Sam Humphries says that he’s excited for the next writer to start at a new #1, and that it’s a big get, but he won’t say who it is.

I agree man, I think Harley has gained a place in the public mind that everyone knows who she is. I have faith that the character won’t fade and be around for a while.

Is it Matt Fraction? I would plunk down some monies for that.

She won’t even skip a month. They’ll just reboot the numbering. They aren’t just going to drop something popular

I think scenario number four is most unlikely. Harley is absolutely everywhere, so I wouldn’t mind slowing her down a little bit. I also think a reboot would be unlikely, as her solo adventures seem to be celebrated generally. Maybe she’ll lead a team? I think that’s a possibility.

I can’t imagine Punchline was intended to replace her. I think she’ll disappear in a year or two.

The Harley Quinn book will come back with a new team and a new #1.
BUT considering how DC seems to want to erase the Harley and Ivy romance (at least in main comics), something tells me that Poison Ivy won’t be part of the book judging by how Humphries said that he was not allowed to even mention Ivy in his run. It’s so weird. THe Harley and Ivy romance is pretty much funding this platform through the animated series. The Palmiotti and Conner run in which Ivy co-stared was the top 3-5 best selling DC book for years. The moment Ivy left the book lost subscribers and the quality was average.

I’ve seen a lot of people really worried about what a Punchline means for Harley. I’ve even seen people say that Harley losing against Punchline is disrespectful to her character. I feel the opposite. I feel that she almost has to get her butt kicked to legitimize the threat of Punchline or what’s the point?

I think that Punchline if used right might be exactly what the character of Harley Quinn has needed in the past 5-10 years. A nemesis. If they’re going to push hero Harley down our throats they better go all out and make it a challenge for her. Deep in my heart I hope villain Quinn comes back soon… But until then I’ll wait and enjoy something different!

If they’re going to push hero Harley down our throats they better go all out and make it a challenge for her.

I like hero Harley, or anti-hero or whatever she currently is. I do agree with your sentiment though; giving her a good nemesis could lead to some fun stories.

I like it too I just am tired of it and hope that this isn’t how she’s used forever from 2013 forward. It’s fun though and there’s some great things you can do with it. Mostly I just REALLY miss villain Poison Ivy.

Agrees Harley has needed a nemesis and Punchline could deliver.

Also agree with the villain aspect of Harley and Ivy, add Catwoman and we got a Sirens reboot. I’m on board all the way with that.

They like renumbering. Wonder Woman has multiple #1
I would like to see Harley the animated series comic. Kind of like how they have Teen Titan Go or DC girls books.
Harley isn’t going anywhere. You don’t ditch your money maker.

I completely agree!! the entire reason I got a DC universe subscription was to watch the animated series, which I loved so much that I started devouring the 2013 harley quinn comics. hearing about how dc seems to be erasing their relationship back into “gal pals” made me stop in the middle of rebirth. I just do not understand their decision with this at all.

Welcome to the community!