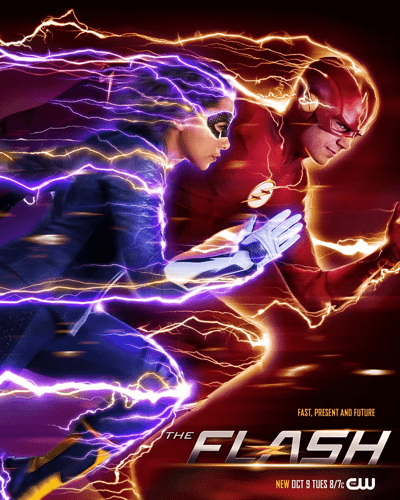 I think overall the season was okay. Nora was interesting at first, but when the show became more about her, that’s when the show started to suffer. Having Cicada be the villain didn’t do them any favors. Cicada would’ve made a good half-season villain like Dr.Alchemy.

And yet, there were some good parts. I loved Ragdoll and I was so happy when Joe came back. Nora’s origin story turned me around on her. Reverse Flash was interesting. He’s usually the best part of any episode.

Notice how I haven’t said much about Barry. It seems like he got lost in the shuffle on his own show.

wondering since Thawne has come to care for Nora as a daughter, if this new timeline is an aberration he created … to drive a knife in Barry and gain a speedster ally in XS … if events in Crisis expose this plot, would Nora, who is very much alive, be tempted to return to this moment, succumb to the Negative Force, land the killing blow to Reverse Flash and take his mantle

Oliver’s ultimate sacrifice may not be limited to Barry and Kara, but for Nora, too

Overall I enjoyed the season. Wish they had used Dibney more. Cicada could have been done better even using their alternate Cicada due to time change. Besides Legends it is the CW show I most look forward to each week. Hope next season improves a bit.

If the actor wasn’t busy doing Dune and The Suicide Squad, I would love to see David Dastmalchian come back as Kadabra. I felt he was fantastic in his one episode and would make for a great season-long villain.

Mix of good and bad, like most seasons of The Flash. I really liked the Nora stuff, and the return of Thawne. Cicada wasn’t a compelling villain (neither was Cicada II) and this was my least favourite Wells to date (except his interactions with Ralph, who was great this year). Like Arrow, the episode felt a lot like a series finale until the very end that ties into Crisis.

^^^ ya know I felt the same thing. Flash finale definitely felt like a series finale. Idk why I got that vibe. It was a bit unsettling xD

I hate that they killed her off!! She was gorgeous

and I loved her. But I guess destroying the dagger Introduces another timeline??! How so? It just seems like another poor writing technique to explain the absence of somebody or creating an event.

Can Nora still be born? Will Iris still be able to have kids?

Arrow did the same thing in its own way with Emiko. But another dead Queen? Eh…

Eh. I felt like Flash was a supporting character in his own show, which annoyed me. I wasn’t really invested in Nora or the family’s drama with/about Nora, so that really hurt the season for me, even at the end. I liked that Iris finally got a bit of her life back outside of the Flash/Star Labs stuff. Also, Joe’s presence made a huge difference for me; the show needs him. I generally like Cisco, so I’m sad to see him go, but at the same time I didn’t think this season had the same fun Cisco vibes, so it’s probably time to let the character say a goodbye. I’m curious what Killer Frost’s new costume will look like (assuming that was Cisco’s parting gift). I really liked Ralph this season, and I was so excited to see the name on his case file at the end!!! Hopefully, that’s more than just a tease, and we’ll get Sue next season. After all, with Cisco, Wells, and all supporting speedsters (seemingly) off the show, there should be room to refocus on the remaining hero characters - and, yes, especially the Flash.

I thought the Cicadas were a major weakness this season. He/they could have been the first half villain with Thawne’s plan revealed earlier. As a major villain in two shows, punting Thawne around in half an episode just seemed weird and rushed even with him ultimately getting away. I hope next season has strong villains.