The Batman, the cartoon

This may be a controversial “hot take” but the animated series “The Batman” is the best animated adaptation of Batman’s comics yet. You cannot change my mind.

I love the interpretation of Bruce Wayne’s personality, and I think it blends seamlessly with his more serious Batman persona. A lot of adaptations hit the grim personality too hard, something I feel it is emotionally shallow. The music is good. The side characters are well developed. The villains are fun, with great costuming designs, and their personalities are witty. They bounce off of Batman really well. They are my favorite interpretation of the Bat villains.

Yes, even the weird Riddler with the long slimy black hair.

I just wanted to know if anyone else shared this (entirely correct) opinion.

I definitely think it’s been underrated. The fights were highly kinetic, they took some interesting liberties with character designs, and definitely had its own charm.
Though I don’t know if I’d consider it “the best”.

I loved it, especially the final season. I don’t know if. Can say it’s definitively the best but it’s amazing.

That’s fair. I was mostly being hyperbolic, but I have a soft spot the size of Jupiter for this show.

And yes, definitely, the fight choreography combined with the awesome animation was really something special. I especially like how the Joker’s design with the long trailing sleeves contributed to the fluidity of his movements, and of course it matched his colorful personality. I kinda want to know where the Joker learned to fight like that, but then again, that’s probably a silly question. Multiple choice backstory and all that.

Also his dialogue is actually funny? I don’t know, I just think the Joker should be funny, even if it is in a twisted way. He’s all about that comedy.

I think Batman TAS will always be my favorite of the Batman cartoons, but The Batman definitely has a special place in my heart. It was as if someone took TAS and tweaked it in a few different places. Bruce Wayne feels a lot younger in the show, and as others have mentioned the fights were very action-packed. I found it interesting how they brought in original characters, particularly the first Clayface, while also incorporating traditional characters in a fresh and organic way. In hindsight, some plot lines were very childish, but then again, they were kinda supposed to be.

I dunno, I sort of like grimy hobo Joker who was living in a party favor factory before he hit the Gotham crime scene. It feels very… I don’t want to say real because it’s cartoony. But Joker actually felt mentally unstable here, rather than just homicidal? As someone with mental issues myself, I know hygiene can fall by the wayside when things get heavy. Gross and dingy clown in ill fitting clothes feels very appropriate.

Yeah, this was definitely a weird Riddler. I like it, still, but very different. I don’t know if it was the intention, but the greasy long hair reminded me of Snape, which might influence my opinion.

Is nobody going to talk about the most amazing cape in any media ever? 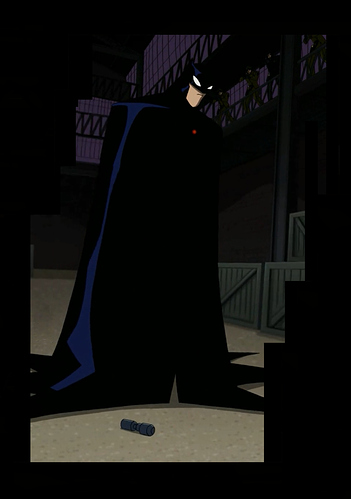 I see what you mean about Joker. Riddler too, to be honest. I never thought about comparing him to Snape, but it works

But the one character redesign that beat them all (for me anyway) was Cluemaster. Gosh, to see him in the show, and then pick up a 90’s Robin comic at my comic shop’s dollar bin, it was insane to think that they were the same person. Don’t get me wrong, having the extreme, well-built, 90’s Cluemaster be like a second-rate Riddler is fun and all, but the insanity of this fat middle-aged guy holding a grudge over a game show was unbelievable to me as a kid, and fun to rewatch now.

You’re right. God I loved the way that cape moved when he fought. When it was closed and he bent out of the way of a blow, I could really imagine people thinking the Batman was an inhuman monster or the stuff of urban legend. It’s a little detail but it really makes it incredible.

@Batman0803 Absolutely! It was pretty crazy, but the inherent craziness of a Normal Guy putting on a bat suit and fighting crime as a vigilante makes these kind of off-the-Wall but still sorta believable villains work. Like, dude being obsessed over a game show he played as a kid? Totally believable. Kidnapping his one-time rivals to rub his superiority in their face, all while wearing what I assume is a beanie with eyeholes cut out of it? Weird, but this series is about a guy in a bat costume so who am I to judge?

I enjoyed it. I remember falling off during season 2 and then catching up with the rest of the show a few years later after it was done.

The intro and its music was both cool and catchy, too.

Yup, there’s a warm place in my heart for The Batman.

I started off rolling my eyes at the show, I must admit - I’d been so spoiled by BTAS, I was certainly prejudiced going in. I hated their take on Mr. Freeze, was annoyed by the over-use of Penguin and was bored with Detectives Yin & Bennet. And the toyetic nature of all the Batwave stuff? Puuuullllleeeze.

But late in the first season when they did THAT thing with Det. Bennet, I sat up and took notice. By the time they added Barbara and Dick, I was all in. The fourth season is my favorite.

Also, for the record, I never minded their version of The Joker.

Yes their version of the joker was amazing yet terrifying

I liked the show. BTAS was my favorite but The Batman was still good. I liked all the different takes on the characters (except Riddler’s hair and Bane’s red skin(that made no sense)). The guitar riffs got a little annoying when you binge watch the first two seasons in one day (heh… that was a long, great day). It also gave us one of the greatest Joker lines ever. “What are you going to do? Lock me in the loony bin? We’re already here!”

Final verdict: designed for kids but it was a great Batman show. Different and amazing takes on all of our favorite characters.

[and, as @Adamantine said, that cape belongs in the Smithsonian]

Not as great as BTAS, TNBA and BTBATB. But The Batman was unique. I liked the different take on characters like Riddler, Joker and Mr Freeze for example. And Poison Ivy was interesting. I thought the show got interesting when Batgirl and Robin came in. And Season 4 and 5 was excellent. Having Superman and his characters there was cool. So overall it was an interesting modern take on Batman. Won’t ever forget goth Riddler

You certainly aren’t alone. The Batman is THE best animated Batman series. It better than BTAS, by quite a bit IMO. BTBATB was fun and I liked its tongue in cheek campiness.

The Batman is a better visual style, the fight choreography is much better. BTAS. by Bruce Timm’s own words was brawler style, which doesn’t suit the character nearly as well as more fluid fighting style.

Joker was a malevolent interpretation. Much better than BTAS. I liked the take on Riddler, it was very fresh. I quite prefer the Mr. Freeze version. (The oh so pitiable Victor Freeze from BTAS left me cold. Pardon the pun.) I liked their being a history between the Cobblepot’s & the Pennyworth’s. That was very really nice angle I’d never seen explored. This Penguin came the closest to Burgess Meridith’s Penguin. (I did love Paul Williams in the role in BTAS)

Their use of bringing in Batgirl first and as older than Robin made much more sense and more comics accurate, calling back to the Bronze Age.

Rino Romano is a better Batman voice than Kevin Conroy. (If there is a truly hot take about the series it’s that). KC was a good Batman voice but I never felt the Bruce Wayne side. Where as Rino’s work was much more balanced and I the idea that they were 2 different voices but had similarities as well, especially cadence. His Bruce actually sounded like the voice of someone who went to upper class school system but had traveled extensively as well. And the since of dry comedy, which Bruce as a character would have picked up naturally from Alfred.

I’m not sure if it’s still on the service or got rotated out, but Batman vs Dracula is great and based on The Batman characters as well.

I’m usually open minded when it comes to animation. BM:TAS, BM Beyond and Beware the Batman are still my favorites when it comes to Batman series, but The Batman is definitely another on my list. I watched it when it initially aired on Saturday mornings and fell out of it due to the changing lineup. Plus, I became busier around that time so I missed several episodes. Didn’t even know that the show ran for 5 seasons and eventually brought in other DC characters like the Justice League. I have yet to finish watching every episode. Jumped to future episodes after purchasing the series just to see BM’s interaction with other characters. Have to say I also liked the theme song as well (from S1). Once they changed it, it reminded me of BM 66.

I think I remember something called “The Batwave” that was in the show that would work with the toys and activate the action feature. I wonder if that would still work if you still had the toys and streamed the episodes…

Besides Batman Beyond (which is more about Terry, then Bruce), I’ve never watched a Batman tv show (I still haven’t watch Batman the animated series), and I don’t think Young Justice really counts. So The Batman was my first taste at a Batman tv show, and it’s silly, but a good silly. One of my favorite episodes besides the cluemaster one is Two of a Kind were Harley first comes up. I like how they have her as a TV pop psychologist.

A few years ago I tried almost everything to get that thing to work again. It would help to know how exactly the sensor in the “Batwave” toy worked, but the only thing that I could conclude from my “experimentation” is that you would need a cathode-ray TV screen. Either that, or the channel that aired The Batman back then had to insert something into the show that could only be caught by the sensor, and whatever that signal was, it simply isn’t present in the DVDs or wherever else.

EDIT:
A few minutes of internet searching, and it turns out that Mattel still has the instruction manual to the toy in question online. A few pages of interest:

The whole manual can be found here:
https://m.service.mattel.com/us/Technical/productDetail?prodno=B9908&siteid=27

So yeah, the only way this thing will ever work again is by perfectly replicating our beloved memories of Saturday mornings in front of those boxy cathode ray TV’s.

@Batman0803 whoa! Well that explains that. Seriously, thank you so much for checking that out and providing all that info. It’s something I’ve thought about for a while when it came to “The Batwave”