Always wanted to see these two fight each other (in costume) in live-action even more than Batman vs Superman. Such great actors playing them too! 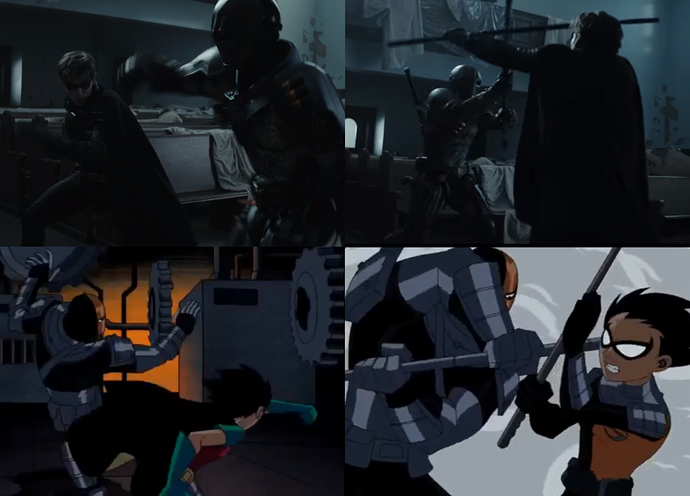 Fantastic episode. I’m totally down with what they’re doing

Awesome. Except for small details with logic during the fights, this episode was fantastic.
Example of this logic…Deathstroke jams his pointy staff into Robin’s shoulder. Robin can’t turn sideways to avoid it? Or Wonder Girl being easily sliced up by Deathstroke’s knife knows. I don’t care if it eventually ends up that way because D is good…but come on…,The Winter Soldier/Arya Mary Sue move was ridiculous…Captain America (unlike the Night King with his 1000 years of fighting experience) was able to counter it…quite simply, D’s win was too easy against an Amazon. I’m not saying that it shouldn’t end the way it did…Just make it believable. I love this show, but they don’t think through the fight logic sometimes. Not that Wonder Girl wouldn’t have still gotten sliced up…she just wouldn’t let herself be that easy of a target. Again, Love this show, except for when they think that logically we are stupid. Let me just stand here and wait to get knifed. After first stabbing…“Good Joe…Let me stand here and give you an easy 2nd shot at stabbing me”. The stunt people have done some of the best work I’ve ever seen, but when they don’t think the logic through, they tend to ruin some of their best work.

Such a great episode. At first I thought this flashback was going to he a chore but I was so wrong. Now I wish season1 was about the original Titans and Deathstroke now lol

Same lol The OG’s story/episodes have been some of the best from both seasons imo. Even though I only grew up watching the newer ones from the Teen Titans Animated Series this show’s done a great job at endearing/fleshing out the OG’s. Season 1 felt more like the story for the newer Titans while Season 2 is the story for the OG’s. Hopefully if/when Season 3 is announced we get a good mix of both or there’s a spin-off so we get two separate Titans shows.