[Superman Fan Club] PRESENTS: The Issue a Week of Superman Silver and Bronze Age Challenge of the Superfans Season 2, WEEK 1!!!

Welcome to Week 1 of Season 2 of a very special challenge / contest , reading one single issue a week from the currently- digitized DC Universe Infinite collection of Silver and Bronze Age Superman and Family comic over a three month timeframe! You don’t have to be named “Rip Hunter” to succeed, but it can’t hurt either!

Speaking of whom,
This time around: BRONZE AGE! 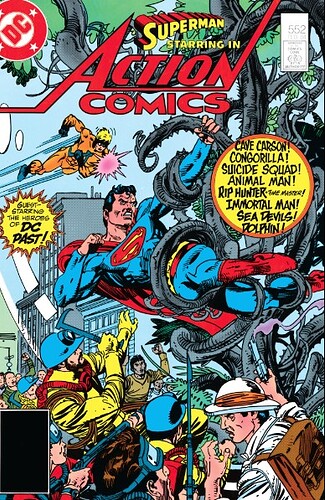 And now…the announcement everyone has been breathlessly waiting to hear!! The results of Season 1 of …CHALLENGE OF THE SUPERFANS!!! Yeaaaaaaay

Congrats to @CaptainYesterday @RexRebel @patterson65.37405 and me, your host / MC @Don-El for participating and sharing all 13 weeks of Season 1!

Congrats are also in order for those of you who got over halfway at this point: @clucktrent bravely fought through 11 of the 13 weeks (and we hope all is well at the Trents). Also @Bar-El slugged through 8 of the 13 weeks bravely while running other clubs on this here internetz thingie!!!

Appreciated also is @DanTheManOne1 for joining when you could and contributing a lot of neat detailed background for several of the stories!

@AlexanderKnox and @Thepringles1.19584 , thanks for stopping by the Season 1 challenge as well, you are welcome anytime!!!

And now…on to Season 2’s unique Silver and Bronze Age Challenges…up, up and away!!!

I enjoyed seeing all of these older heroes being brought back on the story, though Vandals Plot seems a little weak to me, as I imagine Superman comes into contact with enough forms of energy that the spores would’ve been destroyed by now, but we will find out next week. I think they had stopped this by this story not sure, but if I remember right Supes use to clean his suit on the sun.

Marv supposedly wants Superman depowered, yet has him throw a junked apartment building halfway around the planet to stop a flood in the Philippines. Nice shot Clark.

Wolfman was trying to bring a more into the personal lives of the Daily Planet staff in the last few years. It really didn’t take until after Crisis though.

Bit of a setup issue, but the end really makes you want to come back for the next one.

Wow, thanks for the info, I didn’t realize that some of them had appeared that recently in comparison to the story.

If you discount some of these backup features or guest star status, they hadn’t been in starring roles since the middle 1960s.

It’s interesting to me than not too much later both Animal Man and Rip Hunter had some really good series.

I just read the second part and if anything, it’s even better than the first. Trust me, you won’t be disappointed!

I think this will be either the fourth or fifth time I’ve read this pair of comics.

There’s lots that I like about the plot in this one.

The idea of secretly having microscopics spores all over Superman’s costume (I assume/ is pretty cool.

The little mini stories featuring each of the Forgotten Heroes from the '50s and '60s were actually very entertaining. I would probably buy a modern-day Cave Carson exploration of the lower parts of the earth type comic. I did read the first of the new series for Cave Carson fairly recently.

One scene kind of threw me, I’d forgotten that for a while at the end of the Bronze Age the adult Clark Kent was dating Lana Lang. 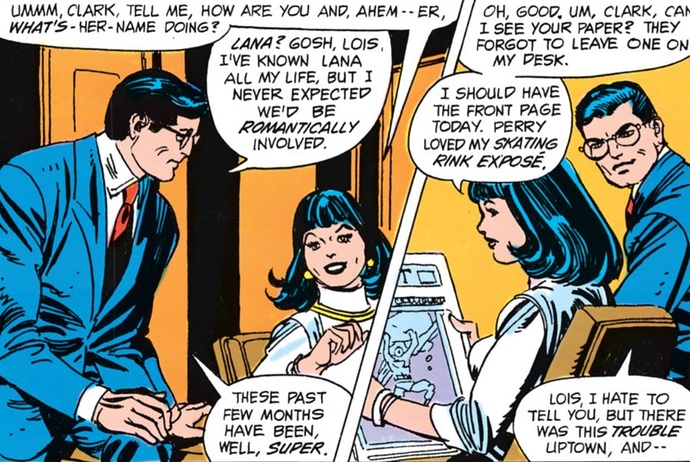 I remember Clark dating Lana. I don’t remember how it happened. It was nice to see all the Forgotten heroes.