This week,we are reading in the main section Justice League #1 and Man of Steel #2. However, over here in the Extra Credit side, we are reading Batman #48 and Batman: Prelude to the Wedding Nightwing vs. Hush #1. That’s a mouthful… Along with Green Arrow #41.
The Weekly Schedule

Batman: Prelude to the Wedding Nightwing vs. Hush #1 (Saturday - Sunday)

Batman: Prelude to the Wedding Nightwing vs. Hush #1 (Friday - Sunday) 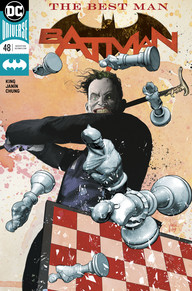 Can’t wait to discuss! I won’t be participating in predictions since I’ve read them already though.

Discussion for Batman #48 is up!! Also the Teen Titans Preview is on the table any time!

1.)The main Summer of Events Book Club? Not if you don’t want it to be.

2.)I find him funny & sadistic. I like it when writers can do that with the Joker. Make me laugh when I know I probably shouldn’t be. It’s the reason I like Scott Snyder’s Death of the Family. And while Tom King’s Joker is obviously very different, he still adds his own sadistic sense of humor to the Joker’s dialogue. Tom King’s Joker is very different from other versions of him. He almost acts sort of foggy. He has strings of logic that don’t make sense. It’s interesting. Not my favorite depiction of the Joker, but I like it.

3.)Religion is obviously referenced strongly, seeing as this story is about a wedding.

4.)In the end, he basically equates love to religion. It’s a very common trend in all kinds of media nowadays. Many people tend to want to have something that gives them meaning. However, since many people don’t want to believe in a god anymore, they’ve turned to other things. Some people believe that science is the source of all truth. However, many people also don’t want to believe in science alone since it makes a lot of things they want to matter not matter. Take marriage for example. Religion says it’s important, but science says it’s chemicals in your brain and how society evolved, which makes it almost meaningless. Which is why you see so many people today describing themselves as “spiritual”. Saying that your spiritual is basically saying that you believe that emotions give things meaning. This story perpetuates that way of thinking, whether not or agree with it is a different matter.

Keep in mind the way I define science. Most religions still agree with most science. I’m talking about the current environment of scientific theories and research.

By the way, you’re great at coming up with discussion questions. I wish I had time to be more involved in your book clubs.

Thanks Awesome Squid!! Religion gives meaning, but it also makes you a better person. I think for Tom King. His message is darker. The opening page of the comic gave the effect that prayer was meaningless. How could god let this occur. I like what you said about marriage and religion though!

For those interested, I’m extending Batman discussion so tomorrow both Batman AND Nightwing vs. crush will be available.

By the way, Batman #48 -50 is my second favorite arc of the series despite the ending of it. Losing to the Batman Superman fair day.

Onto Nightwing vs. Hush, the first time I read this I didn’t know who Hush was. The issue though has some fun reveals about the DC Universe as a whole including pocket dimensions. I would be interested in seeing this idea returning.