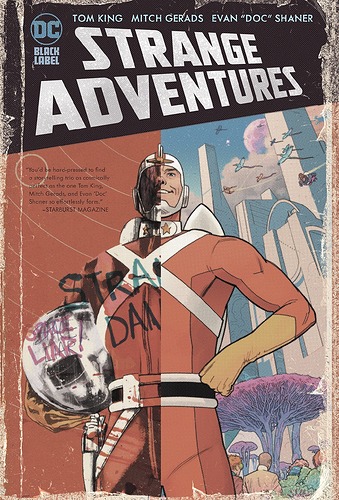 Strange Adventures by writer Tom King and artists Evan “Doc” Shaner and Mitch Gerads follows a trend that has served its writer well in the past with his previous efforts in exploring the psychological weight of a hero driven by love and duty. In some of his earlier DC books, like Mister Miracle , Batman and Heroes in Crisis , King energizes his protagonists with powerful emotional urges that embolden their determination to protect their loved ones while also moving them down dark paths because of those urges. Adam Strange, one of the more classic Silver Age characters in DC’s long history, has rarely been given the spotlight, let alone one that has peered into the heart of darkness that both reifies and deconstructs the very idea of him. With Tom King’s conspiracy laden plot, and Doc Shaner’s bright, optimistic artwork of the past juxtaposed with Mitch Gerards grizzled illustrations of the modern present, the team redefines the space explorer in moving and surprising ways which will prove to be a bedrock in the character’s history for years to come.

To learn more about the new Strange Adventures graphic novel, head over to DC Comics!

Have you checked out Strange Adventures yet? Let us know in the comments below!