Stories that Changed Your Opinion of a Character

What are some runs or stories where you may not have cared previously about a character or saw them a certain way, and it changed drastically?

For me, it would be John’s run on GL. Didn’t have a ton of love or understanding of the character(s) but the mythology he tweaked and created made him one of my top 2 DC characters

Red Hood and the Outlaws Rebirth made me go from loving Jason to absolutely loving him more than the other fictional characters I’ve had crushes on in the past, if that counts as a change.

Absolute Justice (this is going to be a big one) turned Hawkman from Hawkgirl’s possessive ex into a consequentialist hero suffering from a death wish.

It turned Stargirl from an jealous (yet fun tow watch) character with a great design into a surrogate family member for every hero she comes into contact with.

It turned Dr. Fate into somebody who is wise with all the answers into a struggling magic man struggling to deal with his crazy powers.

It turned Clark from a heavily reactionary guy into a proactive hero who could actually lead other heroes.

Future State : Green Lanterns - Book of Guy made me decide to actually give Guy Gardner a chance, I’d previously dismissed him thinking i would care about him and now he’s my 2nd fav lantern

I’ll count it! Enjoyed that run as well!

Loved Smallville and that was a truly epic episode. It was amazing to see these characters on tv and being taken seriously

I haven’t quite caught up to Future State yet, but promos I saw for this looked great! When I first got into GL I hated Guy, thought he was annoying and pointless. The more I read the more I “got” him and he’s become a joy to see anytime he shows up Stargirl the TV series
I never cared much about Stargirl in the DCU until she got her own TV series.
I never read Stars and S.T.R.I.P.E.
I wasn’t crazy about her in JSA/All-Stars etc…
I didn’t care for her in Smallville or Legends of Tomorrow. (although she was good in the JLU episode Patriot Act)
In short. Not a fan.
That all changed when I started watching the Series on DC universe.
It was fun and light and not filled with needless profanity.*
I quickly dived in watching every episode as it came out and reading all of the original Stars and S.T.R.I.P.E. series in between episodes.
I’m looking forward to season two

(now I’ve never been a language prude (lord knows I’ve dropped my share of F-Bombs in the last 35 or so years) But the DCU exclusive series Titans, doom patrol, and Harley Quinn) started out with such an overdose of the stuff that It felt like I was in Middle school again when a teacher walked out of the room and everyone started swearing at each other just because it made them feel like grown ups))

The storyline that turned Stargirl into my favorite member of my favorite team is “The Hunt for Extant.” 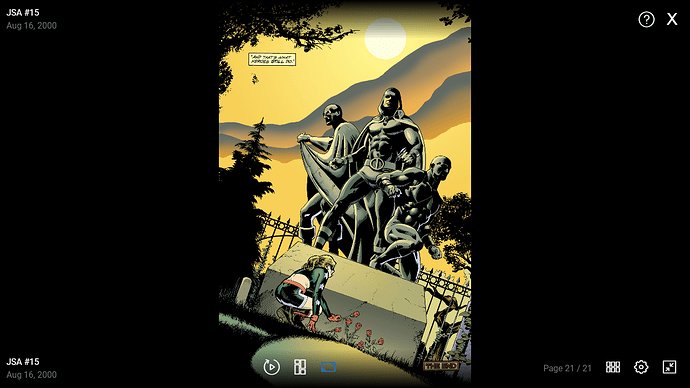 This is a super fun thread idea, @thatonetim!

This was my introduction to Damian Wayne and Bruce Wayne as a father. I hold this story super close to my heart and look forward to one day owning the Omnibus. Hoping to find another DCUer that appreciates it as much as I do!

I recently discovered this incredible story that showcases Huntress and connects her to Batman in a meaningful way.

The most recent Hawkman series actually got me interested in the Hawks and their history. My previous opinion of them was very much that they were abrasive, bash heads first, ask questions later angry heroes who had a convoluted past involving a time spanning love story except for maybe this reincarnation for one of them because reasons?

Geoff Johns got me into Green Lantern and Aquaman, but I didn’t have as strong preconceived notions about them going into those runs… Other than the harpoon hand seeming like a bit much.

I liked Wally in guest appearances, but after reading Waid’s Flash run I absolutely loved him and his supporting cast.

Huge fan of Batman and Robin by Tomasi and Gleason! I had found Damien up until that point abrasive but amusing. The father-son story being told was absolutely fantastic and made me care so much more about them both. It’s kind of a bummer we don’t see much Batman and Robin time anymore

Agreed on the Hawks. I wanted to love them so much but didn’t find much I cared about outside of team books (JSA) but Venditti and Hitch’s work had me so invested in their lore and stories!

I couldn’t agree with you more, @thatonetim! That’s so cool that you had the same takeaway - thank you for sharing! I remember gobbling that series up when I first read it.

I’d love to see these two make a comeback through Gleason and Tomasi.

It definitely helps having such amazing creators like Gleason and Tomasi on the book. I followed them since Green Lantern Corps. Their recent run on Superman had some amazing father-son/family dynamics storytelling as well!

Jerry Siegel’s Superman stories, I think that because Superman strayed away from the core concept of the character it hurt the characters long term viability. Siegel’s Superman is actually interested in social change, often written with the intent to expose real life criminals schemes, which is reflective of the spirt of the New Deal at the time. Many of the plot holes that exist in Superman today don’t really appear in the original stories, and they exist at a later date due the character being diminished to telling Sci-fi and Superhero battles, to currently just Superhero battles, while Siegel’s run could do any of those genres along with true crime stories.